A vigil in London commemorating the tens of thousands of Tamils massacred two years ago by Sri Lanka’s forces in the final months of the island’s war was addressed Wednesday by parliamentarians from all three major political parties and representatives of leading UK trade unions, rights and peace campaigns, as well as representatives of several Tamil Diaspora organisations, with many speakers calling for an international investigation into the atrocities and recognition of Tamil self-determination and Tamil Eelam. The British Tamil Forum (BTF), with the support of other diaspora groups has organised the Mu’l’livaaykkaal Remembrance event. Braving rains, over twelve thousand people attended the Trafalgar Square event in the course of the evening, the organizers said, citing police liaison officers. 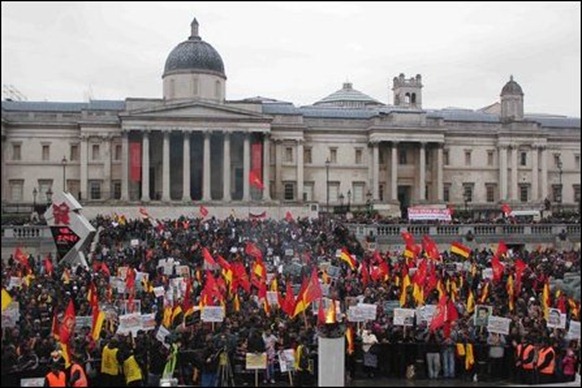 Tamil expatriates and non-Tamil supporters converged on Trafalgar Square between 6 and 8.30 p.m., crowding into its central well and the steps to the National Gallery.

Many brought with them the Tamil Eelam flag and streamers in the Tamil colours of red and yellow, which stood out against the dark clothing worn by the crowd.

The central theme of the vigil was the need for an international investigation into Sri Lanka’s war crimes, crimes against humanity, and genocide, organizers said, the importance of which they said had been underscored by recently released report by United Nations expert panel.

The event began with a minute’s silence to remember all those who had died in Sri Lanka’s genocide. A mother of two fallen Tamil freedom fighters lighted the Flame of Sacrifice at the event accompanied by the singing of a powerful and stirring song composed specifically for the London event echoing across Trafalgar square and the surrounding streets.

Pre-recorded speeches of Pazha Nedumaran, the veteran Tamil nationalist leader of Tamil Nadu and of V. Rudrakumaran of TGTE were also broadcast on the occasion.

Wednesday’s event was also meant to underline the Tamil nation’s unity in defiance against Sri Lanka’s oppression and in the pursuit of justice for Colombo’s mass atrocities, organizers said.

[The Conservative and Liberal Democrat parties are Britain’s ruling coalition; the Labour Party is the main opposition. Some MPs are endorsed by both the Labour and Cooperative parties and use the joint title, though many more Labour MPs, including its leader Ed Miliband, are also members of the Cooperative party, but are not endorsed as representatives by both].

Notably, the Tamil vigil was addressed by representatives of the Stop the War Coalition and the National Union of Teachers (NUT), both of which are amongst the most prominent social movements in Britain, [The former is one of the largest peace movements; the latter is an important trade union], as well as Campaign Against Criminalising Communities (CAMPACC).

The Conservative MPs, Halfon and Scott, both of whom are also members of Britain’s Jewish community, expressed their outrage at Sri Lanka’s genocide of the Tamils and its militarized internment camps, making pointed reference to their Jewish heritage. They also signed the BTF’s petition calling for an international investigation and urged their parliamentary colleagues to do the same.

John Rees, co-founder of the ‘Stop The War Coalition’, pointed out that world powers routinely prioritized their interests over the suffering of ordinary people and noted how they had refused to intervene as Sri Lanka was carrying out mass slaughter in 2009, despite the mass protests of Tamils.

Dr. Andrew Higginbottom, Principle Lecturer in Human Rights at Kingston University, was even harsher, blasting Britain’s Imperial rule as well as its inaction during the mass killings of 2009.

In a strident speech, he reminded the crowd that Trafalgar Square is a monument to British colonial slaughter; pointing to a statue of Major-General Sir Henry Havelock under whom up to ten million Indians were killed during British rule.

Jan Jananayagam said 2009 was a particularly British failure, as it was the colonial British state, which also established Sinhala dominance over the Tamils and set in train the events which culminated in the mass slaughter.

Noting that those at the vigil had gathered to commemorate 40,000 lives that were each precious to the Tamil people, she reaffirmed Tamil determination to ensure justice was served for them all.

To further mark the second anniversary of Mu’l’livaaykkaal slaughter, BTF also launched at the event a new campaign, titled the ‘I-campaign’, to build support for an International Independent Investigation (or 3 ‘Is’, hence the name), using the slogan “Open your Is on Sri Lanka.”

John Rees also urged support for the ‘Boycott Sri Lankan Cricket’ campaign recently launched by TYO and which has escalated with the Sri Lankan team’s arrival for a tour of England.

Martin Powell Davies, of the National Union of Teachers, focused particularly on the plight of Tamil children during the final months at Mu’l’livaaykkaal and the psychological and physical damage inflicted by Sri Lanka’s offensive.

Pledging the NUT’s continued support, he called on other British trade unions to support the Tamils’ struggle for freedom, and urged Tamils in turn to support the unions in their campaigns for the rights of workers.

Tim Martin, director of campaign group ‘Act Now’, meanwhile announced a stepping up of its awareness campaign using celebrity endorsement to highlight Sri Lanka’s atrocities. He warned that despite the release of the UN report recognizing Sri Lanka’s atrocities against the Tamils, this was not a time for complacency, but an escalation of pressure for international pursuit of justice.

As the vigil progressed, and the speakers addressed the gathering, those participating were able to place flowers before photographs of some of the 40,000 people killed in Mu’l’livaaykkaal in 2009.