Britain and US seek accountability for civilian deaths, but the island says this would set back reconciliation efforts 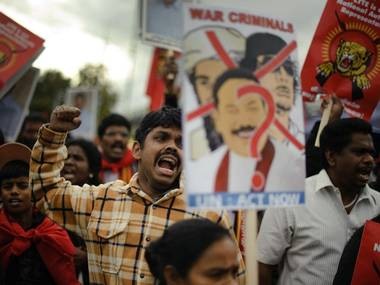 Britain and the US are preparing for a bitter showdown with Sri Lanka as the two countries engage in a major effort to pass an international resolution rebuking Colombo over alleged war crimes said to have been committed during military operations against ethnic rebels.

A resolution calling upon Sri Lanka to fully investigate who was responsible for the deaths of thousands of Tamil civilians and to establish genuine reconciliation is to be tabled during a meeting of the UN Human Rights Council (UNHCR), which opens tomorrow. At the same time, Sri Lanka is assiduously working to block any such measure.

“Many thousands of Sri Lankan civilians died or suffered other violations in the final weeks of the long-running civil war in 2009. There has been no complete accounting of those deaths or other violations and no pursuit of accountability for them,” Eileen Donahoe, the US ambassador to the UNHCR in Geneva, said in a statement this week. “We believe that real reconciliation must be based on accountability, not impunity.”

The move to pass the resolution follows the findings of a UN-appointed panel which last year said there were “credible allegations” both the Sri Lankan army and the Liberation Tigers of Tamil Eelam (LTTE) were responsible for war crimes in the final stages of the decades-long civil war. The panel suggested tens of thousands of civilians lost their lives in the last days and weeks of the combat and that Sri Lankan troops fired into a supposed “no fire zone”.

While Sri Lanka rejected the report, it constituted its own internal investigation, the Lessons Learned and Reconciliation Commission (LLRC). This report – which found the armed forces had not acted inappropriately – was rejected by the UN and criticised by human rights groups.

The US, which has welcomed some of the LLRC’s recommendations, says it fails to deal with the issue of accountability. “There cannot be impunity for large-scale civilian casualties, and that if there is to be real reconciliation it must be based on an accounting of the truth and serious implementation of changes,” said Ms Donahoe.

Sri Lanka has dismissed the US claims and a large team of officials, headed by foreign minister GL Peiris, is lobbying countries to oppose any resolution, saying such a move would damage ongoing reconciliation efforts. A government spokesman, Susil Premajayantha, said rallies would be held across Sri Lanka in opposition to the move.

“We will organise demonstrations to show that the people of this country are with the government. They are against the Western forces,” he told reporters. “We have lobbied member countries [of the UNHRC] and the feedback that we have is very positive. We will be able to block any resolution against us.”

An earlier attempt to pass a resolution against Sri Lanka in 2009 failed, largely because of the decision by India, Pakistan and other nations to adopt a different document that praised the government in Colombo for its treatment of refugees.

Western diplomats in South Asia and Geneva said the wording of the resolution was still being worked out but that it is likely to be modest, given the desire to have secure the support of as many of the 47 UNHCR member countries as possible. “No-one wants to see the resolution defeated,” said one Western diplomat, who asked not be identified. It is unlikely the phrase “war crimes” will appear, though there could be a demand for Sri Lanka to report back to the council.

The role of India at the meeting could be crucial. A spokesman for India’s foreign ministry said no decision had yet been taken on whether Delhi will support the resolution.

Campaigners claim that given the sensitivity of the issue, even a modest resolution would mark a success. Fred Carver of the Sri Lanka Campaign for Peace and Justice, said: “If successful, this motion will show the opinion of the world, and in particular the opinion of nations in the global south, has shifted and that the Sri Lankan government can no longer turn a bind eye to war crimes and crimes against humanity without becoming a pariah.”

The Sri Lankan authorities insist a number of recommendations made by the LLRC have already been put in place. Earlier this month, the army said it had established a panel to investigate whether soldiers were responsible for civilian deaths. The army has always insisted it adopted a zero civilian casualty policy and for some time claimed no civilians had been killed. Prof Rajiva Wijesinha, an MP and an adviser on reconciliation to President Mahinda Rajapaksa said he had recommended the establishment of a ministry dedicated to reconciliation. He added: “Unfortunately we are hopeless about letting the world know what we are doing.”