It is not just Sri Lanka’s people that the UN Human Rights Council must serve this week, but the cause of international law

This week the UN Human Rights Council has an opportunity and a duty to help Sri Lanka advance its own efforts on accountability and reconciliation. Both are essential if a lasting peace is to be achieved. In doing so, the council will not only be serving Sri Lanka, but those worldwide who believe there are universal rights and international legal obligations we all share.

Nearly three years since the defeat of the Liberation Tigers of Tamil Eelam (LTTE) by the Sri Lankan government there has still been no serious domestic investigation of the many allegations of war crimes and crimes against humanity committed by both sides during the civil war’s final stages. These tragic events cannot simply be ignored. 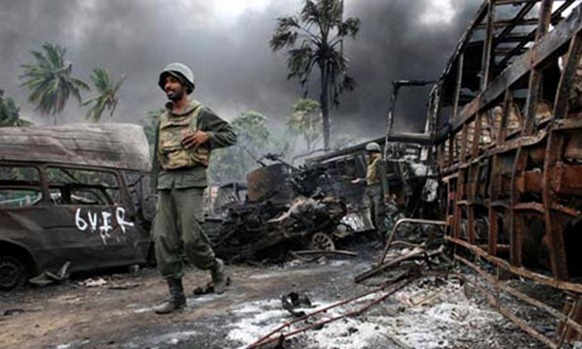 Sri Lankan soldiers inside the war zone in the north of the country at the end of the civil war in May 2009. Photograph: AFP/Getty Images

A report in April 2011 by a panel of experts appointed by the UN secretary general documented government forces’ large-scale shelling in "no-fire zones" where civilians had been encouraged to gather. Government forces also shelled a UN hub and food distribution lines. The same report says the LTTE used civilians as human shields, refused to allow people to leave conflict areas and forcibly recruited adults and children as young as 14 to fight. Credible sources cited in the UN report have estimated that around 40,000 civilians may have perished in the final months of the conflict.This tremendous civilian toll covers thousands of stories of suffering and strength, the vast majority of which are untold. One verified story chronicles the experiences of a family who were forcibly displaced more than seven times in eight months between September 2008 and May 2009. They repeatedly sought shelter in government-declared "safe zones" (which were then shelled), buried five relatives, including a six-year-old girl, in unmarked graves, and saw many of their fellow civilians killed and injured.

While the Sri Lankan government’s own report from its Lessons Learned and Reconciliation Commission, published last December, includes important findings on reconciliation, and represents a potentially useful opportunity to begin a national dialogue on the conflict, it is disappointing in its failure to address seriously accountability issues. The recent announcement that the army intends to investigate its own actions during the conflict is not the kind of independent inquiry that is required.

In the absence of a credible and independent investigation into what happened in Sri Lanka, the Human Rights Council has an obligation to uphold human rights law and international humanitarian law during its upcoming 2012 sessions. As the UN report said: "The conduct of the war by both sides represented a grave assault on the entire regime of international law designed to protect individual dignity during both war and peace. The victory of one side has emboldened some to believe that these rules may now be disregarded in the cause of fighting terrorism."

Against this background, and continuing reports of human rights violations by the authorities, we urge the council to support a resolution that seeks accountability for the terrible violations of international law that have taken place, and establishes mechanisms to monitor progress on the steps the government is taking on accountability. If there is insufficient progress by the government in establishing a credible accountability process in the near future, we urge council members to support the establishment of an independent investigation.

At the same time, the council should support efforts to achieve meaningful reconciliation, human rights and democratic freedom for all Sri Lankans. Their country is a beautiful jewel of an island, rich in culture, history, resources and human talent. But we fear that if nothing changes, the crimes that remain unaddressed will continue to haunt Sri Lanka’s people and could ignite violence once again.

Finally we want to emphasise that Sri Lanka’s recent history is an issue that concerns all of us.