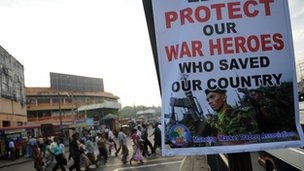 Hundreds of demonstrators in the Sri Lankan capital, Colombo, are protesting against UN plans to investigate alleged abuses during the country’s civil war.

The UN Human Rights Council is to consider a resolution calling for an investigation into events, focusing on the closing phase of that war.

Sri Lanka’s army defeated separatist Tamil Tiger rebels in May 2009 – both sides have been accused of abuses.

Sri Lanka’s government has rejected calls for an international probe.

But earlier this month US officials said they would back the UN Human Rights Council resolution, due in March, urging Colombo to investigate war crimes allegations by its own forces.

Protests were also reported in other towns around Sri Lanka, including the former rebel stronghold of Kilinochch in the north, where about 500 people chanted slogans.

Although a proportion of these were genuine government supporters, other demonstrators had been coerced into attending by masked motorcycle-riders, one source told the BBC’s Charles Haviland in Colombo.

The government commissioned its own investigation into the war last year. The Sri Lankan Lessons Learnt and Reconciliation Commission (LLRC) cleared the military of allegations that it deliberately attacked civilians. It said that there were some violations by troops, but only at an individual level.

But another report commissioned by the UN Secretary General reached a different conclusion, saying that allegations of serious rights violations were "credible" on both sides.