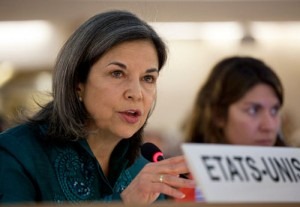 When the United States joined the UN Human Rights Council two years ago, we set forth four values that would guide our work in this body: universality, dialogue, principle, and truth.  We knew then, as we know now, that the honest dialogue and dedicated effort of this Council will help all of our nations on the path to international peace and security.

In the two years since, we have stayed true to those values.  But our global challenges remain—among them, threats to freedoms of assembly, association, expression and religion and to vulnerable populations.  As we seek a second term on the Council, the United States stands ready to build on the Council’s successes to pursue solutions to these pressing challenges.  This session provides several opportunities to do so.

Last week in Tunisia, we partnered with the Friends of Syria in a unified commitment to help end the suffering of the Syrian people.  We joined Council members this week to condemn the Asad regime’s ongoing brutal crackdown.

We must extend the mandate of the Commission of Inquiry launched by the Council, which has effectively performed its intensely difficult mandate with great commitment, so that it can continue to document the atrocities being committed and lay the groundwork for accountability.

Recent efforts on Syria are not the first time the Council has provided an important platform for action.  Last year, this Council created a special rapporteur to monitor the human rights situation in Iran.  Special Rapporteur Shaheed has conducted his work in a spirit of openness and dialogue.  His important work must continue, and I encourage the Council to continue his mandate.

Tomorrow, Iranians will go to the polls for the first time since the 2009 disputed election—a moment when tens of thousands of Iranians took to the streets to demand their civil rights.  Since then, the regime’s repression and persecution of all who stand up for their universal human rights has only intensified.   The United States stands with religious and political leaders around the world in condemning the conviction of Youcef Nadarkhani’s  and calling for his immediate release.

In Burma, the government has taken substantial and serious steps to improve the human rights situation for its citizens.  We must continue to support this progress by extending the mandate of the special rapporteur. We commend the government for its recent efforts and encourage it to continue discussions with ethnic minority groups—armed or otherwise—on the path to national reconciliation.

The United States will also support renewal of the mandate of the special rapporteur on the human rights situation in the Democratic People’s Republic of Korea.  We share the Republic of Korea’s deep concerns regarding the treatment of refugees and asylum seekers from the DPRK in third countries.

We know from experience that there can be no lasting peace without reconciliation and accountability, but the United States is concerned that, in Sri Lanka, time is slipping away.  The international community has waited nearly three years for action, and while we welcome the release of the LLRC report, the recommendations of the report should be implemented. We have engaged Sri Lanka bilaterally on these issues since the conflict ended in 2009, and stand ready to continue to work with them.  Action now in this Council will sow the seeds of lasting peace on the ground.

The United States has worked through this Council to assist countries in transition with their human rights challenges.  We have supported human rights protection and promotion in Kyrgyzstan, Guinea, Haiti and Cote d’ Ívoire, among others.  In our UPR presentation, we addressed our own incomplete journey toward universal human rights, and we admire those countries that speak about their shortcomings as well as their strengths.  We stand ready to help countries ready to address their human rights challenges, and during this session we hope to reach agreement to provide additional assistance to Yemen and Libya.  With the support of this Council, these countries can consolidate democracy and become new beacons of leadership on human rights.

The United States has also worked through this Council to address significant cross-cutting issues that affect all of us, including combating discrimination on the basis of religion or belief.  We were pleased to host the first meeting that seeks to implement Human Rights Council resolution 16/18, and we look forward to adopting a resolution this session that recognizes the important progress we have made.

Resolution 16/18 has proven that this Council can discuss and act upon difficult issues where consensus seems impossible. We also look forward to the upcoming discussion on the human rights of LGBT persons, underscoring that being lesbian, gay, bisexual or transgender does not make you less human.

As States increase pressure on rights and freedoms online, the United States must reiterate that the universal freedoms of expression, assembly and association are as applicable on the Internet and mobile technologies as they are to traditional modes of expression. We are concerned that some States are using new technologies to block content and suppress political dissent, and we encourage States to fulfill their human rights commitments  and obligations in the context of new technologies.

The Council has done a great deal to focus on pressing human rights situations but there are still challenges to address. The United States was disappointed that the Human Rights Council review process did not address the unfair singling out of one country for a permanent agenda item.  The Council will improve its credibility when it eliminates Item 7 and addresses all states under a common rubric.

Lastly, the United States remains gravely concerned about recent violence and continuing tensions in Tibetan areas of China. We call on all governments including China to respect the fundamental freedoms of religion and expression of all of its citizens including members of ethnic minorities.

Human rights have universal application.  All governments, including mine, must respect the human rights of individuals, protect the ability of individuals to exercise their rights, and create mechanisms for transparent and accountable governance.  As we participate in this session and seek a second term on the Human Rights Council, the United States will continue to bridge differences and build consensus with all members.  We believe the Council continues to make a significant impact on the world, and we look forward to being a part of its ongoing progress.