The US resolution at the UNHRC in Geneva has deepened the schisms in Sri Lankan society. That resolution will have the same polarizing function as did the Ceasefire Agreement (CFA), in defining each political tendency in the popular mind for a while to come. The dominant elements of the centre-right opposition, the UNP (apart from its ‘reformists’, that is) opine that there is nothing wrong, or particularly anti-Sri Lankan, with a resolution that calls on the  state to implement its own LLRC recommendations. The TNA has, after a sporadic show of realism, finally taken the line of the Tamil diaspora’s pro-Tiger lobby by calling on the member states of the UNHRC to support the resolution. For the most part, the cosmopolitan civil society commentators are cheering the resolution on. On the left, the JVP opposes the resolution but opposes the government still more, on economic issues and terms the government’s anti-resolution mobilization, a tactic.  The breakaway Movement for People’s Struggle, is strangely silent. The left within the government is firmly against the resolution. 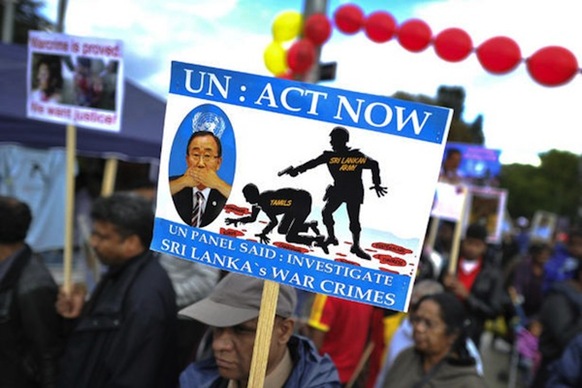 Where, what and sleight of hand

The reasoning of the opposition’s leading ideologues is suspect. The problem with the resolution is not that it calls for the implementation of the LLRC recommendations. The problems are (a)where the resolution is coming from, (b)the body of the text that precedes the seemingly innocuous points about the LLRC and (c) the sleight of hand where it expresses disappointment about the LLRC report and goes beyond it to issues of ‘accountability’. 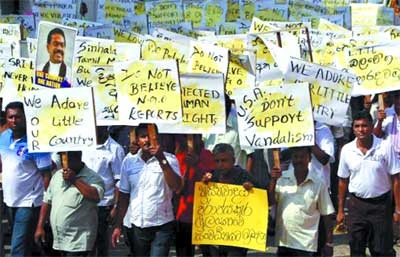 Certainly the implementation of reform recommendations of the LLRC report must be fast-tracked and a compressed timeframe committed to by the government. However, this commitment must be made to the parliament. The government of the Republic of Sri Lanka is primarily responsible to the citizens of Sri Lanka. That is what popular sovereignty in a res publica, a republic, is about. The popularly elected government of Sri Lanka is not responsible in the first or last instance to any international forum or intergovernmental body comprised of governments responsible to their respective citizenries. Sri Lanka’s opposition may do well to move a resolution demanding a timeframe and suggesting one for the implementation of the LLRC report. The push or indeed drive for implementation of reform must be from within our society, with the international solidarities and multipliers of our choosing.

I rather doubt that the vast majority of Sri Lankan people want Karunanidhi, Jayalalitha and Vaiko, still less the Tiger flag waving demonstrators who will camp in Geneva from March 5th to the 23rd, to help guarantee and hasten the implementation of the LLRC reforms. With support like this, the LLRC does not need enemies.

None in Sri Lanka and India, who were supportive of the war against the LTTE, are on the side of the resolution. Conversely, there is an overlap between those who practised appeasement of the LTTE, were against the war, were fellow travellers of the Tigers (e.g. Vaiko, the TNA) or were lukewarm and vacillating with regards the war and considered Mahinda Rajapaksa a greater enemy than Prabhakaran, are all supportive of the resolution. This congruity and presence of Tiger flag bearing demonstrators outside the UNHRC in Geneva will not be lost on the vast mass of the Sri Lankan people. The people will also remember who in the world community stands with and who stands against a resolution which has so greatly roused the enthusiasm of the Diaspora Tigers.

As for accountability, the number of civilians killed by the US bombing campaign named Rolling Thunder, commencing February 1965, was 182,000. The number of children who died in the sanctions on Iraq, according to Denis Halliday, the administrator of that programme who resigned in disgust, was 5,000 a month. Guantanamo, the vast prison camp located on the soil of a foreign country against the wishes of that country, still remains open despite a presidential pledge to close it.  The National Defence Authorization Act has provisions only describable as draconian.

These are the guys whose draft resolution seeks to preach to us about the observance of international law in the fight against terrorism? Of course it must, but who are they to tell us that when they are serially responsible for one of the most egregious violations of international law, ranging from the invasion of sovereign states on false pretexts, to the practice of ‘extraordinary rendition’. Doesn’t the hypocrisy just get to you? And if it does not, what does that say about you?

In my closing remarks at the UN Human Rights Council in Geneva after the special session on Sri Lanka in May 2009, I equated the allegation of war crimes and crimes against humanity committed by Sri Lanka, with the charge that Iraq possessed WMDs and asked whether we should buy a used car from the guys who sold the world the Goebbelsian Big Lie on WMD.

A stable functional piece of furniture usually needs four legs. If it is to rest firmly, it needs these four legs to be even. Politics and political discourses in Sri Lanka remind me of furniture which either doesn’t have four legs or which have one or more legs shorter than the others.

Analogous to the four legs of a piece of furniture, the four pillars that a strong successful state and a good society must rest upon equally, are national sovereignty, popular sovereignty, individual rights and self-determination.

National sovereignty means that a nation-state (or a pluri-national state) is a political unit or community entitled to its unity and territorial integrity, and has the right to determine its own path, regulate its own affairs, without external domination, intervention or interference in its internal affairs.

Popular sovereignty means that the right to rule rests with the people, who decide who rules, how and for how long. If the rulers violate this social contract, this sacred trust, the people have the right to replace, even overthrow them. The Sri Lankan constitution makes explicit that as a republic, sovereignty is vested in the people, who exercise it through a regularly and periodically elected executive president and legislature.

Individual rights pertain to the sovereign individual person; to the equality of every citizen, who is inalienably possessed of a stock of rights and freedoms which must not be transgressed upon.

A society must rest on the equal recognition of all four of these principles, rights and fundamental values. Though at different points of history, one or the other may find itself emphasized due to the threats posed and the tasks at hand, all four must be held in equilibrium; never abandoned or counter-posed to one another.

Today the country is tragically dividing between those who accuse the government of mounting protests against the US resolution at the UNHRC resolution against Sri Lanka as a diversion from issues of the rising cost of living and those who claim that the demonstrations against the rising cost of living are wittingly or not, part of a foreign plot to de-stabilize the government which is defending national sovereignty.

That’s a debate easily resolved. If the government is using protests against the HRC resolution to mask the cost of living, that’s no excuse not to protest against such a resolution. Rather, it is a reason to protest either independently against that intrusive resolution while also protesting against the cost of living, or moving in parallel with the government on this issue while proceeding against it on the domestic front. Any other stance and tactic would only be tantamount to support of a move against one’s country; a move which has doubtless incensed the vast majority of citizens.

Conversely, if oppositional protests are helping de-stabilize the government and undermine our defence of national sovereignty, then the answer surely is to cease and desist from those policies and actions that generate those protests, and to never meet such protests with responses that can only trigger more protests and international criticism which directly help those who would seek to undermine our sovereignty.