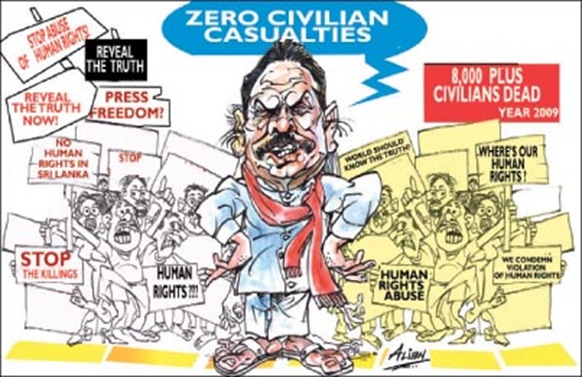 In this dystopian world, zero equals 8,000+; when prices go up, inflation comes down and people just love political deprivation and economic pain.

The world opted not to believe, because it was such an obvious, infantile fib. An armed conflict of the magnitude and virulence of the Fourth Eelam War cannot be fought to a finish without killing and wounding civilians. This was doubly so, given the LTTE’s determination to maximise civilian casualties, as a politico-propaganda weapon against Colombo.

Caught between two self-proclaimed liberators hell-bent on fighting to the last Tamil man, woman and child, civilians had to die.

Denying that elemental, truth was a momentous mistake, and a silly one. That denial is the spectre haunting the Rajapaksas in Geneva today.

If the regime admitted that some civilians were killed, some injured, offered a public apology and promised compensation, the issue would have died a natural death. The regime did not, its inanity further fortified by the absence of Southern criticism, either from opinion leaders or the general public, of this obscene fantasy of the Fourth Eelam War as a clean, pleasant enterprise (it was unavoidable given the nature of the Tiger, but horrendous nevertheless).

Badgered by the West, Defence Secretary Rajapaksa admitted, in August 2011, that some civilians did indeed die. Geneva-jitters compelled the regime to make another grudging concession to the truth last week; civilian casualties in the last phase of the war are now placed at 8,000+. In years to come, whenever international pressure mounts, the regime is likely to make further upward revisions of casualty figures – until perhaps the whole insalubrious truth is revealed.

The Rajapaksas never acknowledge the victims of their political, military or economic measures, be it civilian Tamils killed in the war, Colombo’s poor evicted from their homes, farmers and fishermen denied a livelihood or consumers wounded by price hikes.  If this ‘no pain; no victims’ mindset bears a striking resemblance to that of Vellupillai Pirapaharan, it is because they are indeed similar.

Who can doubt Vellupillai Pirapaharan’s fidelity, his manic commitment to the cause of a new, sovereign Eelam? But the separate state Mr. Pirapaharan so obsessively desired was not Tamil Eelam but Tiger Eelam, his very own personal fief. For the sake of this terrifying utopia he was ready to attempt anything, however inhumane, unethical or unintelligent.

The Rajapaksas are fanatically committed to a unitary Sri Lanka – which is totally and completely under their control, subject to Familial Rule and fated for Dynastic Succession. To strengthen and perpetuate their rule over Sri Lanka, they are willing to commit any crime. Tiger Eelam was not Tamil Eelam, though for a while the interests of the two did not diverge markedly. Whenever there was a conflict, the interests of Tiger Eelam prevailed over those of Tamil Eelam. The Rajapaksas too place the interests of Familial Rule and Dynastic Succession over and above Lankan national interests, as is evidenced by the 18th Amendment, the Commonwealth Games mania and innumerable other crimes and errors.

Leaders of successful national liberation struggles against a colonial oppressor installing themselves as life-time rulers is a common Third World phenomenon  This was the course Mr. Pirapaharan had set for himself; win Eelam on the battlefield, and turn the new state into his personal property. The ‘winners-keepers’ formula had worked in other places, so why not here and why not a Pirapaharan?

…Or a Rajapaksa? Since Sri Lanka was not a colony and there were no foreign oppressors, the Eelam War was renamed (totally incorrectly) as the second (and the more real) ‘independence struggle’. This was no ideological error or linguistic excess, but a logically thought-out move. In colonies, the leaders of victorious independence struggles become the ‘Fathers’ of their new nations. With the Eelam War billed as the Second (and real) Independence War, Mahinda Rajapaksa could be enthroned as the ‘real’ Father of the Nation. A ‘Father’ the nation – consisting of adult citizens transformed into infantile subjects – cannot be without.  Once Mr. Pirapaharan became the Sun God, everything he did had to be correct, be it the murder of Mahattaya or child conscription. This belief in self-infallibility is a delusion common to the Rajapaksas. Gods can do no wrong, nor kings. The Siblings do not intend to be mere politicians ruling for a term or two; they see themselves as de facto royals, with a right and a duty to rule over the rest of us, from Father to Son or Brother to Brother.

As Mr. Pirapaharan became identified with the Tamil cause, any opposition to him became, inevitably, treachery to the Eelam struggle. The Siblings are attempting a similar politico-psychological transformation, with not insignificant success. Thus when Gen. Sarath Fonseka staked his own claim to the presidency, on the basis of his role in defeating the LTTE, he became transformed, with lightening rapidity, from patriotic hero to villainous traitor.

Vellupillai Pirapaharan used the cause of Eelam to justify the unjustifiable – child conscription, murder and torture. The Rajapaksas are no different when they use patriotism to deny the need for accountability and justice, in the North and the South, within and beyond the Fourth Eelam War. It is two months since the Additional Magistrate ordered the arrest of parliamentarian Duminda Silva and yet the CID remains immobile and the AG maintains a reverberating silence. In Rajapaksa Sri Lanka, Duminda Silva, as favourite of a Ruling Sibling, is above the law. So the family of Bharatha Lakshman Premachandra is fated to share with the families of the Trinco students, the Muttur NGO workers, Lasantha Wickrematunge, Prageeth Ekneligoda and innumerable other victims (famous and anonymous) the agony of justice denied.

Political infamy is augmented by economic inanity. Having dismissed the huge price hikes of last month as mere bagatelle, our incomparable Central Bank Governor has set the sights of his hired-gun on the Standard and Poor for lowering Sri Lanka’s ratings. The reasons cited by the S&P are self-evidently true, such as forex weaknesses, increasing debt levels and opaque and non-independent political institutions. The analysis by the S&P indicates, again, that the Rajapaksa economic path is as dangerous and as unsustainable as the Rajapaksa political path; and the combination thereof is likely to cause Sri Lanka and Sri Lankans far more pain than the Tigers every did.

The road to Tamil Eelam need not have ended in Nandikadal (and the internment camps); the road to Tiger Eelam had no other destination.  Rajapaksa invidiousness began in the North and the East; before it ends, it will mutilate Sri Lanka, and push most Sri Lankans, supporters and opponents alike, into a politico-economic precipice of unimaginable proportions.