Grassroots activists of the British Tamil Forum (BTF) and journalists from the UK-based International Association of Tamil Journalists (IATJ), who came together with leftist activists of the Socialist Resistance (SR) and Denmark-based leftist activist Ron Ridenour, in a meeting held in London on Wednesday, resolved to promote the findings of the Dublin Tribunal on Sri Lanka and to give foremost priority to the work on building solidarity with trade unions and progressive groups in the UK on the campaign to recognize Tamils Right to Self-Determination. The meeting which was chaired by Fred Leplat of the SR, also had participants from the NSSP, Sri Lanka. 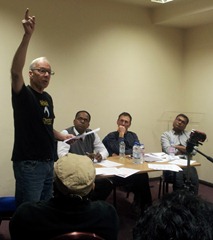 Talking about the need for the international community to “understand issues and accept Tamils’ right to self-determination”, Gopi Gopiratnam from the International Association of Tamil Journalists, said that before 2009, the whole world was against the Tamils’ struggle and supported the Sri Lankan regime.

Referring to organizations like TNA and GTF who are still negotiating with powers like the US and UK, he argued that though Tamils are aware of the western complicity with the Colombo regime, some are still under the illusion that the west will deliver a just solution.

Thanaraja Vakesan of the BTF who spoke briefly about the history of the two nations in the island, noted the glaring flaw of the British colonial power in creating the unitary state. “It is an incomplete decolonization of the British, a forced marriage between the Tamil nation in the North and East of the island and the Sinhala nation in the south.”

Stating that the very existence of the Eezham Tamils in their homelands is at threat, he added that this could only be addressed by recognizing the right to self-determination.

Ron Ridenour, Denmark based leftist writer and author of Tamil Nation in Sri Lanka, noted four different types of power alignments that worked against the Eezham Tamils in favour of the Colombo regime – the Western bloc led by the US, with India included, the Eastern bloc, led by China and Russia, the NAM countries, and the ALBA countries.

“Cuba and ALBA are caught in an ideological blind between supporting oppressed people and supporting sovereignty of third world states,” he said, adding that Cuba and the other Latin American countries have forgotten their moral responsibility to stand with the Tamils and have provided immoral support to the Sinhala regime.

Ron Ridenour also opined that the Permanent People’s Tribunal, which had tabled a report on the conflict in 2010, should work further on its findings to popularize the case of genocide of the Eezham Tamils to other peoples.

Requesting the Tamil people to rise above sectarian politics, he stressed the need to build solidarity with other oppressed groups, criticising the belief that the western establishments would aid the Eezham Tamils.