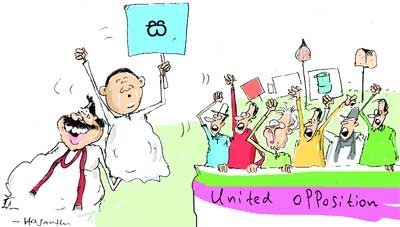 The opposition protest at Panadura was a success. It was the second Vipaksaye Virodhaya – protest of the opposition, to take place. First happened on the 17 of February, opposite the Fort railway station and it became an eye opener to the government as well to the pundits of the opposition. Particularly those who complained, that Ranil with his programme, which  included devolution and rational socioeconomic criticism, as a non starter had to join the VV, one way or the other. The NSSP has been working with the UNP on common actions, for over a decade. At the beginning it was unity to defend the peace project.  In the recent period, the opposition to the corrupt antinational development programme of the government gave impetus to our common action programme. VV action programme was accepted by a number of parties in the opposition.  DPF led by Mano Ganesan, USP led by Siritunga, Manamendra for DNF were there from the inception. It became a real action front of the opposition once the Tamil National Alliance(TNA) also decided to join the campaign. No doubt the fact that all parties involved were prepared to press the government to implement the LLRC report was attractive to the TNA leadership. All leaders of these parties participated in the first VV in Colombo. TNA was represented by Sumanthiran and Premachandran. VV  hit Colombo like a tornado. Masses all over the country saw that the opposition has taken steps to challenge the government.

Government realized that VV could cut across their mobilization which was on the basis of Sinhala Buddhist chauvinism. Hence the US proposal for a resolution on Lanka became a heaven sent opportunity for them to revert back to screams and shouts on the streets about imperialism. Hurriedly they tightened the rope around Vasu and others, the old left that left with them, using anti imperialist propaganda. Even the trade union leaders, who claimed to be independent leftists, abandoned their proposed agitation claming that the time is not ripe to challenge the government. But the agitations were coming out spontaneously, not heading the government propaganda about Geneva imperialism. Ranil was not swayed by this bogus anti imperialism of Wimal and Champika.

As agreed he called for the second VV to be held at Panadura. Even some militants were hesitating to challenge the government at this critical moment, less it will be unsuccessful. But masses turned out with the same or greater enthusiasm. Nearly three thousand people came to this town out side Colombo distinct. Generally Panadura, with the history of Buddhist revival behind it, is reputed to be a major centre of Sinhala chauvinism.

But the workers and fishers, all came out in thousands to participate in the second VV. All leaders of parties in the action front were there. An opportunity was given to all party representatives to speak. In my speech I said, “The government leaders claim that the imperialists in Geneva are taking actions against a patriotic government. But this government has accepted the dictates of the IMF based in Washington. These are orders of global capitalism. Government heeded these orders and devalued the rupee, raised interest, reduced social welfare and cut the subsidies. Workers, fishers and peasants are super exploited while local capitalists are plundered. This is exactly what Lenin explained to be imperialism.  Mahinda has acted as a faithful agent. On the other hand when UN human rights committee raised questions about disappearances, white vans that carry out abductions, suppression of Tamils, killing of workers & fishers and para military organizations, Mahinda screams of imperialism. Wimal and Champika have invented a new theory of imperialism. “We must get rid of this corrupt, fraudulent, slavish, killer regime to achieve true liberation.” I noticed people were very attentive and militant. After all the speeches we started to march towards Colombo. One side of Galle road was blocked and police faithfully diverted the traffic in to the other lane. It was a powerful display of mass power. I could see the sympathy of the masses as I marched in front to lead slogan shouting. In the next junction we stopped and Ranil thanked everybody and we dispersed.