Diaspora Tamils, who have witnessed several setbacks, are made to believe that they should welcome and promote anything that looks like a buoy to hold on. This is wrong and Diaspora groups should think before being carried away in an imposed trend to welcome such ploys, opined activists from Tamil Nadu belonging to various shades of polity in a flagship programme, Neethiyin Kural (Voice of Justice), in WinTV on Friday, anchored by CR Baskaran. Thoazhar Thiyagu called the resolution as an escape route being offered to Sri Lankan state by the USA. Professor Dheeran said Tamils should not be trapped once again by the joint ploy of the USA, India and Norway. Oaviyar Pukazheanthi said Tamil organisations had attributed much significance to the Geneva sessions without the knowledge of the outcome and now the draft resolution clearly exposes the agenda seeking bailout of the SL state.

The US-tabled resolution on Sri Lanka seems to be designed carefully to betray Eezham Tamils and bail out the Sinhala state in the island of Sri Lanka. Tamils therefore should not be hurrying in welcoming this resolution, said Thoazhar Thiyagu.

Tamils all over the world should be unanimous in fixing the minimum requirement of any international move and it could be nothing but independent international investigations, he further said.

Giving a historical outline of events on the international forums after May 2009, Thiyagu recalled that Switzerland had initially come out with a draft in 2009 calling on Sri Lanka to investigate alleged war crimes, but that move was countered by China, Russia, India and associated countries that gave credit to Sri Lanka for its ‘victory’. But, crucial evidences on the war crimes surfaced after that session and there has been four significant steps in the form of tribunals, panel reports and media coverage that attributed significance to the issue by keeping it burning throughout the last 3 years.

This resolution will seek to silence the Tamils by not demanding anything further as everyone would say that there has been a UN Human Rights Council resolution confining the process within the island and one should only follow it up. This would seek to seal off Tamils taking forward their struggle, he warned.

Professor Dheeran said that the draft tabled by the USA in UN Human Rights Council, which limits its reference to the local LLRC findings and recommendations, has failed the intentional community by not referring to UN Secretary General Expert Panel report, which has not only criticized the LLRC, but also recommended international accountability and investigation mechanism. Tamils should take note that the draft placed in the UN body has no reference to the UN expert panel report.

Prof Dheeran argued that the draft seemed to be a joint agenda by the USA, India and also Norway. Former Co-Chair countries had routed the Tamils with their declarations in Oslo. Tamils should be aware of this and be careful in encountering similar traps like this resolution.

The Tamils should continue their campaign vigorously by demanding International Investigations and Right to Self-Determination-based UN-monitored plebiscite among Eezham Tamils in the island and in the diaspora.

Tamils should be even prepared to deal with China, if that is what needed, Prof Dheeran said.

When prompted for their reactions on India’s take on the move, Mr. Thiyagu said India is in complicity with Rajapaksa’s war crimes, crimes against humanity and genocide. If you effectively charge Rajapaksa for the war-crimes, then Congress-India will also be found guilty on these three counts. That is why Rajapaksa is being bailed out from war crimes in the curent move, he said.

When C.R. Baskaran questioned the participants on Tamil Nadu Chief Minister Ms. Jayalalithaa’s letter to the Centre urging India not to back Rajapaksa, Mr. Thiyagu drew a parallel to former CM, Karunanidhi’s letter to Manmohan Singh, before the 2009 Human Rights Council session and said that New Delhi had ignored the request. He implied the same plight to Ms. Jayalalithaa’s request. The approach by Centre hasn’t changed even though there is a new CM in the state, he said.

Oaviyar Pukazeanthi blamed that the New Delhi establishment doesn’t respect the feelings of 60 to 70 million Tamils in India and added that Tamil activists were not sure, whether the CM had realized that the US-tabled resolution will not be helping Tamils, but will only bail out the Sri Lankan state. Professor Dheeran, echoing the same opinion said one should take note of the additional demand that has been put forward by Ms. Jayalalithaa requesting the Centre to call for international economic sanctions on Sri Lanka. 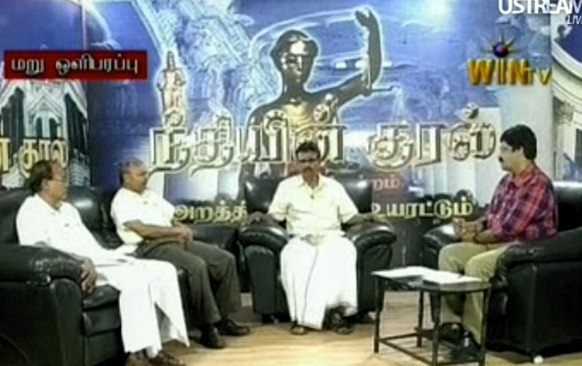