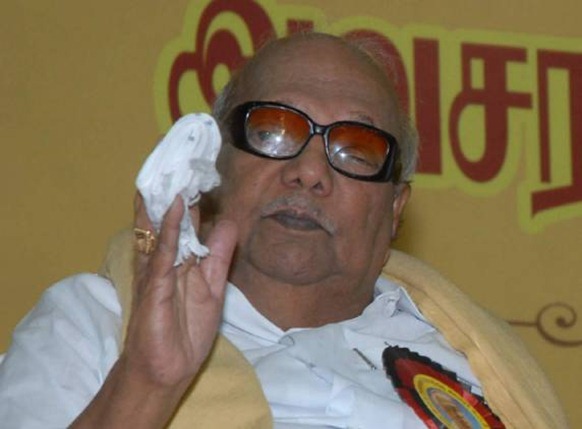 Hardening his demand that India should support the US resolution against Sri Lanka at the UNHRC session, DMK president M. Karunanidhi on Wednesday warned that his party executive might be summoned to decide on whether to continue support for the UPA government if it went against Tamil sentiments.

“I cannot take an individual decision; it must be decided by the party executive committee,” Mr Karunanidhi replied when reporters asked him if the DMK would withdraw support to the UPA government if India backed Colombo at the UNHRC.

The DMK chief said party MPs Kanimozhi and Tiruchy Siva had forcefully argued in the Rajya Sabha earlier in the day seeking Indian support for the US resolution for war crimes probe against Colombo. But foreign minister S.M. Krishna maintained that India would not interfere in the affairs of neighbouring nations.

“If that’s so, what did you do in Bangladesh, asked our MPs and there was no response (from Krishna),” Mr Karunanidhi said. Reiterating the party stand that India should support the US resolution against Colombo, he said, “Or else, the DMK will see it as a betrayal of the Tamils.”

On the train fare hike announced in the railway budget, Mr Karunanidhi gave a guarded reaction to the hike in the passenger fare. “If the hike is to the extent people can bear, then there is nothing to comment.” He said one had to see why and how much the fares have been hiked.

To a question on the functioning of the election commission in the Sankaran-koil by-poll, he said there were complaints that the commission was being biased.

“The DMK will surely win the by-poll if the elections are held fairly,” he said in reply to a query.

Amidst growing pressure from UPA ally DMK and Opposition AIADMK, foreign minister S.M. Krishna told Parliament Wednesday the government would take a stand on the issue of alleged human rights violations by Sri Lanka keeping in view implications on the reconciliation process in that country.

He said the allegations against Lanka were likely to come up for a formal discussion before the UN Human Rights Council in Geneva on March 23. “India will take a view as and when the time is finalised for consideration of the draft resolution on Sri Lanka.”

Mr Krishna said India would like Lanka to “look at human rights issues in a very serious manner”, but ruled out meddling in its internal affairs.

“The issue is sensitive and India needs to consider the implications. Any assertion on India’s part may have implications on our historically friendly relations with a neighbouring country,” he said.

“We would also need to examine whether our actions will actually assist the process of reconciliation in Lanka and enhance the current dialogue between the government of Sri Lanka and Tamil parties.”

Krishna said the government would keep in mind the views and sentiments of parliamentarians before taking a final view.

Dissatisfied, AIADMK members tore copies of his statement in RS and LS. They entered the well of the lower house demanding India support the US resolution. DMK members led by T.R. Baalu walked out of Lok Sabha, which was later adjourned for half-an-hour following slogan-shouting by AIADMK members.

Jayalalithaa not satisfied with PM letter

Chief minister J. Jayalalithaa said Wednesday she was not satisfied with the response of the Prime Minister to her two letters seeking Indian support for a UN resolution against Sri Lanka at the UNHRC session in Geneva. The resolution accuses Lanka of committing war crimes in the last phase of the Eelam war.

“We have got a response from the Prime Minister. But there is no commitment,” CM told reporters in Chennai, adding, “We will continue to press the demand.”

The contents of PM’s letter to CM are not known but in his letter to DMK chief M. Karunanidhi he said New Delhi attached “high priority” to the safety, prosperity and well being of Tamils in the island nation.

“We are engaged with all parties in an effort to achieve an outcome that is forward-looking,” PM said.

DMK threatens to pull out over Lanka resolution | Deccan Chronicle