POINT OF VIEW: THE POINT IS NOT THEIR MOTIVES

For three years political and non governmental entities have been pressurizing, pressing and pleading for action on post-war issues. The government has been telling them to go stuff it. Thousands are said to have been “rehabilitated” but they have been rehabilitated only in name; no homes, no facilities, and no livelihood; it’s a charade. As for demilitarization, publication of names of missing persons and detainees, or re-opening the cover up of the murder of five students in Trincomalee allegedly by the police, or of 17 ACF staff members in Muttur, allegedly by home guards and the police, the regime took bugger-all notice.

Come the UNHRC session in Geneva and we have GoSL doing somersaults and a volt-face. Sri Lanka delegation member and former attorney general Mohan Peries promises to reopen cases of multiple murders by state-linked institutions; ministers in Geneva are offering undreamt of assurances of implementing the LLRC report; the regime swears that it is laying down road maps. I know these promises are not worth a fig; nevertheless, it is significant that the government has been pushed to the ropes.

And where do they turn out types like this ex-AG? When challenged why the report of the commission appointed to inquire into 16 incidents of abduction and assassinations was not made public, the Daily Mirror reports he replied: “The document was not meant to be published.” Oh really! Are these matters of public import or bedtime yarns?  And who paid for the commission – family fortunes or the public purse? 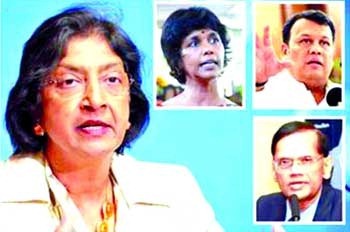 The vital point and what I am driving at is this: One week of international pressure has achieved wonders that all of us, all the king’s men and horses, and all the newspaper editorials, LAKBIMAnEWS included, within the country, have not been able to do in three years!

Of course the government, as is its habit, will forswear and mala fide will be the promise it makes. I don’t get it; why are folks protesting against international pressure; shouldn’t they be demanding more of it?

Whichever way the Geneva vote goes, a new scenario has emerged. Isn’t that a good thing? The Geneva resolution mandates the UNHRC and “special mandate holders” to provide “advice and technical assistance” to implement the measures outlined in the resolution. This will institutionalize the involvement of such agencies which is essential as otherwise GoSL will flout it from day one. People like Vasu need to think of this before behaving like buffoons on the streets of Colombo.

Benefiting from international pressure and having illusions about what the Americans did in Iraq, or the British in some other place are not to be confused. If American pressure is helpful for strengthening human and democratic rights in this country I welcome it, but no way does this mean I will relax criticism of American atrocities anywhere in the world. I have difficulty in understanding why such straightforward exercises in formal logic are beyond the deductive powers of xenophobes. These folks accept aid, export commodities, and send their progeny for education to the imperialist empire. The problem is when it comes to the national question.

What of the motives of the countries that pressurise Lanka? Neither China, Russia, India, nor the West is intervening out of love for Serendib. They each have their agendas. The Indians wish to strengthen their position as a regional power; the Chinese want to contest this and penetrate the Indian Ocean; the Russian’s support killer Assad in Syria; and the Sri Lankan regime for reasons of cold war power play; and America and the EU are determined to correct the strategic balance in Asia in their favour. If anyone imagines that any government, including especially the Sri Lankan regime, acts for motives other than its own benefit, he needs to have his head examined.

The point is not “their” motives, but what the people of Lanka get out of it. There will always be a price pay and we must evaluate the cost-benefit equation soberly. I would be willing to go along with the West if that would help restore human rights and defeat authoritarianism. What is the price to be paid? If it’s a less feverish love affair with China, it is worth paying.

The rout of the Congress Party in the recent State elections in Uttar Pradesh, Punjab and Goa (Congress retained Uttarakhand and tiny Manipur) may drive it into further obfuscations and shambolics on the foreign policy front. Is it not amazing that India, the presumed regional power, is still dumb about what is intends to do in Geneva. Delhi is terrified of resolutions that identify specific countries – meaning Indian state atrocities in Kashmir, Dalit and tribal areas, and massacres in the eastern red belt. Delhi may also still believe that the best way to keep the Chinese at bay is to mollycoddle real and potential dictators; remember Burma! No one knows how India will vote, and its jellyfish shuffling has reduced its views to such a farce that now how India votes is not important.

India’s CPM (Communist Party-Marxist) has not outgrown its Stalinist-Maoist shackles. It took up an absurd position on India’s agreement with the US that opened up nuclear fuel supplies. The reservations the CPM raised were important but the extremes it took its opposition to proved that it had not outgrown the cold war mentality that its ideological beacon China has long discarded and its Soviet progenitors had along ago died for.