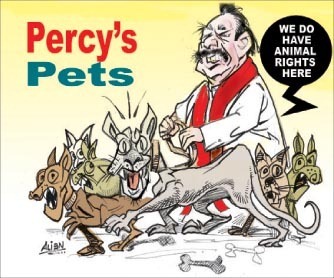 Abductions in the South continue unabated, even as the Resolution on Sri Lanka awaits a vote in Geneva.

Can there be a more damning measure of Rajapaksa-addiction to abuse and impunity?

While the regime hails its own commitment to human rights and howls against diabolical international conspiracies, anonymous men in mysterious vans roam the country unfettered, abducting citizens at will. Not even Colombo is secure from their boundless reach; nor members of the ruling coalition safe from their limitless capacity. As last week’s blotched abduction of Ravindra Udayashantha, the UPFA Chairman of the Kolonnawa Urban Council, demonstrates.

Mr. Udayashantha lost a brother to a white van last month. He was saved from a similar fate because his supporters, assisted by the people of the area, intervened and apprehended some of the would-be-abductors. The men in civvies “…initially confessed that they were army deserters… Then they said they came looking for an army deserter… Then they said they are in the army…attached to a camp in Vavuniya” (Ceylon Today – 13.3.2012). The would-be-abductors were handed over to the police. Instead of being investigated and charged, they were liberated from police custody (reportedly via intervention from on-high) within hours. The Wellampitiya OIC, who resisted this unlawful deed, was allegedly rewarded with a punishment-transfer, with immediate effect!

Can such barefaced violations of the law happen without sanction from the power-wielders? Was not the punishment-transfer of the OIC a signal to all other police officers not to interfere with white vans, as they attend to their grisly duties mandated from on-high?

The inability/ unwillingness of the police to properly investigate disappearances/abductions was an important critical point mentioned in the regime’s own LLRC Report. The aftermath of the Kolonnawa incident clearly indicates that police dilatoriness stems from political intervention. As Senior Counsel Karunaratne Herath informed the NCP Appeal Court, “the Attorney General’s Department is providing security for officials and politicians who commit crimes” and some lawyers in the AG’s Department  “are trying to mislead the country by submitting illegal documents” (Ceylon Today – 15.3.2012). The nexus between this unethical conduct and the imposition of presidential rule on the AG’s Department by Mahinda Rajapaksa is too obvious to be belaboured.

Most Rajapaksa-opponents/critics live with the possibility of unjust incarceration or violent death. But in this land awash with abuse and impunity, even Rajapaksa-supporters and politically uninvolved citizens are not safe from such a brutal fate. Like Dante’s Hell, the Rajapaksa Security State consists of several concentric circles of power. The innermost and the most potent circle is occupied by the three Ruling Siblings; the degree of power decreases as one moves outwards from this omnipotent centre. The law of the jungle is applicable here: the big eats the small, the powerful targets the powerless, with varying degrees of impunity. Every institution tasked with impeding the powerful and protecting the powerless has been degraded and corrupted into effeteness. The 18th Amendment provided a constitutional cover for this process of denudation, rather like Herr Hitler’s very constitutional Enabling Law.

The vast majority of Lankan citizens exist outside these circles of power and thus are both impotent and vulnerable. They are safe only so far as they do not incur the wrath of someone within a circle of power. A horrendous death can become their fate if they displease a ‘powerful one’, as the Kahawatte dual-murder demonstrates, again. Those who occupy the outer rings of power too can meet a grisly end, if they fall foul of those who occupy the inner rings of power, as the murder of Bharatha Lakshman Premachandra and the attempted abduction of Ravindra Udayashantha prove.

In the end, no citizen is safe under a regime addicted to abuse and impunity. What happened to a presidential advisor or almost happened to a UC Chairman yesterday can happen to a parliamentarian or a minister tomorrow.

The LLRC Report, while weak on accountability issues, does advocate several preventive measures which, if implemented, can marginally impede Rajapaksa excesses. For instance, a Special Commissioner might make worrisome inquiries about abductions; and stringent new laws might discourage some uniformed men from becoming involved in such illegal activities. Little wonder then that the Rajapaksas are so resistant to the time-bound implementation of the LLRC Report.

The interests of a country’s rulers and its people do not always coincide. There are occasions when the interests of the rulers (and their cohorts) and those of ordinary masses conflict. The Rajapaksas cannot but fight tooth and nail against the Geneva Resolution, because the right to abduct and punish with impunity is an indispensable pillar of Familial Rule. But if international pressure in Geneva compels the regime to implement some of the LLRC recommendations, it will limit the Rajapaksas’ right to impunity while strengthening the right to life and liberty of not just Rajapaksa-opponents but also Rajapaksa-supporters and politically uninvolved Lankans.

Last week, in the North, a soldier murdered two of his comrades and killed himself, reportedly as a result of a personal conflict.

Just as the ongoing economic upheavals demonstrate the financial costs of militarization; this murder-suicide indicates the psychological costs of maintaining the North as a de facto occupied territory. What this incident revealed was but the tip of an iceberg of myriad problems which, if left unattended, can cause far greater disasters like the wanton murder of sixteen Afghan civilians (including nine children) by an American sergeant in Panjwai.

The regime’s response was laughably inane: it banned the dissemination of “any news related to national security, security forces and the police” without official approval.

The blanket censorship imposed during the Fourth Eelam War did not prevent news of crimes and misdeeds from getting out. The latest Channel 4 video, with its horrific allegation that Vellupillai Pirapaharan’s 12 year old son was shot, execution style, at point blank range, is the best possible indication of the inefficacy and the counterproductive nature of censorship. Whenever news is censored, the logical assumption is that the censor has something to hide. Thus censorship rather than debunking lends credence to charges of rights violations and even war crimes.

Impunity, as we in the South are beginning to comprehend, is a cancer which does not respect borders – geographical, ethno-religious or socio-economic. An army accustomed to arbitrariness, habituated into thinking that power plus democracy and freedom flow from the barrel of a gun and regards violence as an efficacious mode of conflict resolution (including internecine disputes) is unlikely to act with restraint or moderation simply because it is stationed in the South.

In his magisterial work on the Algerian War of Independence, Alistair Horne writes of a French police inspector who tortured his own wife and children because of “what he had been required to do to Algerian suspects” (A Savage War of Peace). Criminality is limitlessly corrupting and blindly addictive.