When the International Community and India, approaching from their point of view, think of only bringing in a regime change in Colombo, buttressing failed democracy of the State and imposing farcical solutions to the Eezham Tamil question, Tamils all over the world, despite their differences, should use the situation to internationally place their demands loud and clear in unison, in ways acceptable to the world. This only will give us the morale to bring forward our struggle in future, if the powers once again fail us. Our demands could be nothing but calling for independent international investigation and asking for UN-conducted referendum on Tamil Eelam. Symbolically answering the powers upholding the State of failed democracy, the Sri Lankan constitution should be burnt all over the world, said Mr Thirumurugan Gandhi of May 17 Movement of Tamil Nadu.

Speaking in a video speech on Sunday, Thirumurugan said that his movement has already entered into talks in this regard with various political parties and grassroot organisations in Tamil Nadu. He called upon the Eezham Tamil diaspora to make the best use of the opportunity in taking the steps for the next stage of the struggle.

It is of utmost importance that we should look at what is happening from our own angle, he said.

The speech was made as a public release on the occasion of a rally held near Ka’n’naki statue at Thiruvallik-kea’ni in Marina Beach, Chennai, on Sunday, which was attended by more than 7,000 people. Kolathur Mani, Prof. Theeran, Thiyagu and Maniarasan were among the main speakers of the event. 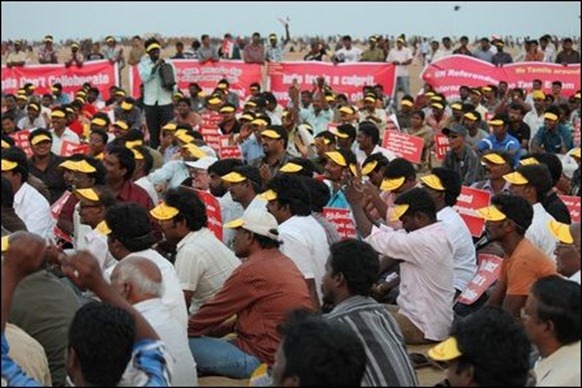 Outlining the historical background of the struggle since the Vaddukkoaddai Resolution and the efforts of India and the US in blunting the Tamil cause – the IPKF of India, IC in the mask of Norway, and the role of the US, especially Robert Blake, in putting the ‘terrorism’ tag, causing diplomatic tilt and blocking money – Thirumurugan said what finally culminated was not an accident, but a planned genocide, planned for several years.

Briefing on the various reports since 2009, as it was the Dublin Report that brought out the real challenge to the UNHRC congratulating the Rajapaksa regime in 2009, the UN was forced to come out with its own report. But by confining the span of investigation only to the Vanni War, the UNSG report managed to reduce the gravity of the issue as one of ‘war crimes of both sides’, Thirumurugan pointed out.

Norway and Sri Lanka have come out with their own reports. Of all the reports, the IC now harps on the LLRC report of Sri Lanka. It is a joke to expect Sri Lanka to come out with justice, he said. 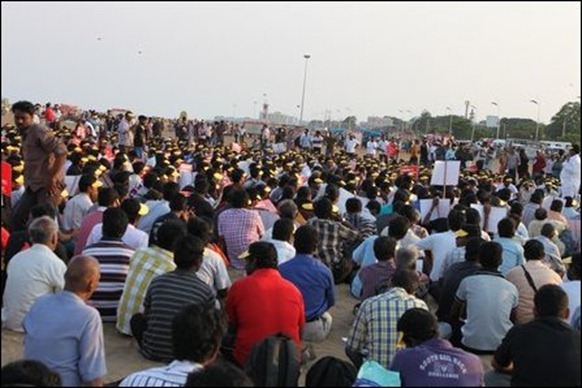 Thirumurugan in his speech revealed a 5-hour talk his movement had with a representative of the International Crisis Group (ICG).

“The ICG didn’t want us to raise the issue of crimes. It didn’t want us to talk on the independence of Eezham Tamils. It wanted us to take up only the matter of rehabilitation of Tamils with the Indian government.”

Asking why the IC is opposed to Eezham Tamil independence, Thirumurugan was of the opinion that the powers thinking of the potentialities of the island want to keep it one, while sharing it among them.

The island has now four zones: The Sinhala elitist western zone, the northern zone where the Indian inroads, especially the inroads of its Braministic institutions including that of MS Swaminathan, are predominant, the southern zone of Chinese influence and the eastern zone with a question. The USA has already done its groundwork to enter into this zone, Thirumurugan said, citing an agreement signed between Colombo and the USA in March 2007 on Trincomalee.

According to Thirumurugan, the powers wanted the island free of national conflict – Rajapaksa was needed to defeat the Tamils, he was getting the support of all, he also in his clever ways has the reins of all of them, but he is not needed anymore. Thirumurugan cited the cases of Zia of Pakistan, Saddam of Iraq, Mubarak of Egypt and several others.

Now this is only a direct conflict between Rajapaksa and the USA. India also has a similar interest, but it couldn’t do it because of its own guilt. But when the US takes it up, India would indirectly support it, Thirumurugan said.

Further summary of Thirumurugan’s speech, leading to what should be the political programme of Tamils, follows:

From the point of view of Tamils, justice cannot merely come by punishing the culprits. Justice comes by attending to the cause. This is absent in the current processes.

India is behind coordinating many of the current happenings. 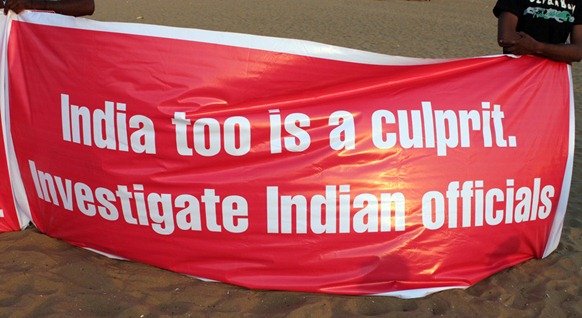 From Foreign Secretary to National Security Adviser, Shiv Shankar Menon did the extraordinary task of coordinating the promotion of Sri Lanka at every stage.

Tamils should start suspecting why all of a sudden there is a spurt of media activity in India concentrating only on the war crimes. This is not happening without the Establishment’s backing.

Tamils should also suspect why the spurt of international media exposure, again confined to only the war crimes.

The target is only a regime change and not the State chauvinism in Sri Lanka. This is sad.

They create an illusion that removal of Rajapaksa would attend to everything but at the same time try to completely erase the Tamil aspirations, by promoting the State.

Judiciary of the State could look after the military that committed the crimes, is the picture that is projected. But Justice Bhagavati has exposed the problems in the judiciary of the island. The same judiciary, and de Silva who was accused earlier, steered the LLRC.

It is not just one part of democracy that failed to correct it through the other parts, but all the pillars of democracy failed in Sri Lanka.

Sri Lanka is a failed democracy and the efforts now are to buttress it, saying regime change is the remedy. 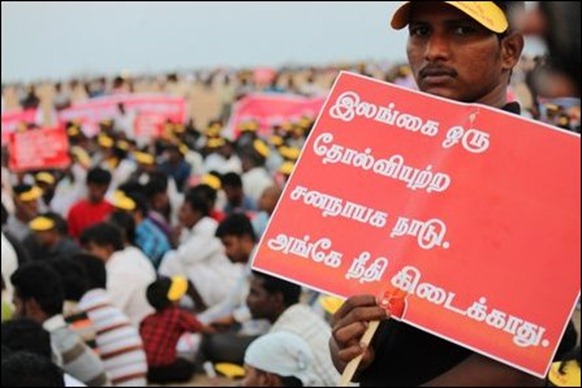 How are the Tamils going to face the situation is a challenge. Earlier they had a leadership. Now it is not there.

Tamils should tell their aspirations and insist on the IC answering them.

If the answer doesn’t come we should tell them that we have to wage our struggle even against them.

Our diplomacy should work here in transforming the human rights question into liberation question.

It should be put in an acceptable way the IC can’t negate it.

When we have asked only we will have the morale to ask them back, if they fail us again. 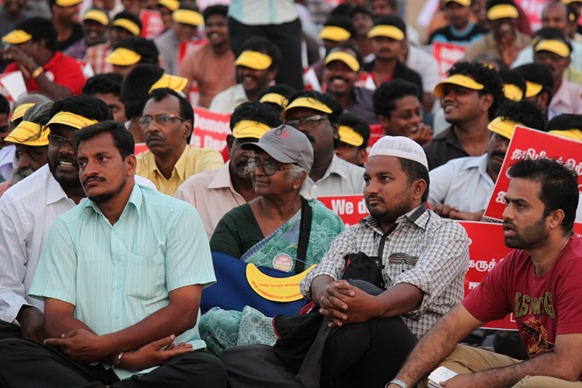 Without missing the opportunity, let us unite in our demands that there should be an independent international investigation and an UN-conducted referendum on Tamil Eelam.

The demand should be loud and clear otherwise we would not be understood by the world.

The media will not come to our help later.

How to direct our struggle if the current proceedings end in failing us again?

As both sides try to uphold sovereignty of Sri Lanka, our efforts should be in exposing Sri Lanka as a failed democracy.

We reject Sri Lanka’s constitution and it should be burnt al over the world and every street in Tamil Nadu.

The symbolism should be clear and this is the answer to the US and others who try to impose a solution of their choice.

All Eezham Tamils and their movements, apart from their differences, should be united in doing this in parallel to what we have undertaken in Tamil Nadu.

When there was a monolithic movement, they were able to destroy it, but when there is a broad, mass-movement that cannot be destroyed, Thirumurugan Gandhi said in his speech.

Speaking to TamilNet on Sunday, Thirumurugan stressed on the point: “If Sri Lanka is a failed democracy that practises structural racism, it can’t give justice. We have to corner the IC to accepting this truth. We have to state that it is a failed democracy and that we don’t accept the legitimacy of its institutions by burning the Sri Lankan constitution. This will also show that we don’t accept their constitution as a constitution that applies to the Tamils. This move will bring a larger debate on why the constitution is being burnt.”

“We will then be able to establish that this constitution is incompatible with demands for Tamils’ rights. This is the way we can also conceptually undermine the US resolution which is only going to save the Sri Lankan state. It is important that a mere regime change is not arrived at as a conclusion,” he further said.