Sri Lanka’s ‘terrorism’ professor Rohan Gunaratna was the foremost of the six “prominent professionals in the education field” cited by Lakshman Kadirgamar Institute in Colombo, as lecturing in a ‘National Conference on the Role of Education in Reconciliation’ hosted by the institute last Tuesday. The professor, lecturing on the “immense success” of Sri Lanka ‘rehabilitating’ ex-LTTE combatants despite their ‘past engagement in the killings in the North and East and outside,’ stressed on the need of schools becoming “multi-ethnic” in the island, shedding ethnic and religious segregations. This means, there can be no more schools for Tamils, like that they can’t have a territory for them, and Tamil and Muslim children will eventually be ‘minorities’ subjugated in the Sinhala-Buddhist schools of the island, commented an educationalist in Jaffna. 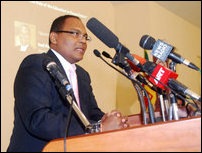 Rohan Gunaratna, professor and head of International Centre for Political Violence and Terrorism Research in Singapore, stressed on the need for ‘multi-ethnic national’ schools. From news-reporting in the early 1980s to ‘university counter-insurgency’, Rohan Gunaratna has a three-decades record of working against the aspirations of Eezham Tamils.

According to GL Peiris, “conscious racial and linguistic identity” was the problem that affected the country and the answer lies in the “National Trilingual Policy”.

All policies that don’t accept the Eezham Tamils as an ancient nation of its own territory in the island are camouflages of the Sinhala nation aiming at annihilation of Tamil identity and eventual Sinhalicisation of all, as the ‘ultimate’ solution, the educationalist in Jaffna said.

The New Delhi Establishment harping on ‘equal citizenship’ of Tamils in the island, without land, political and security infrastructures is another camouflage abetting the structural genocide, the educationalist further said, adding that polity in Tamil Nadu should not be carried away by the hoodwink of ‘equal citizenship’ but should be vocal in prioritising the right to self-determination of Eezham Tamils.

Recently, India’s former president Abdul Kalam was used as a ploy by both genocidal Sri Lanka and abetting New Delhi to inaugurate the ‘Trilingual’ camouflage.

Sri Lanka will first sell its structural genocide of Tamil education to Colombo-centric elite before imposing it in the country of Eezham Tamils, political observers said.

The educational institutions of Eezham Tamils, whether started by the missionaries or started by natives as an antithesis to missionary institutions and colonial outlook of education, are a historical legacy of nearly 200 years that served the foundation for whatever little the Eezham Tamils were able to achieve despite all the odds.

After the so-called independence, by ‘taking over’ the institutions in the name of ‘nationalisation’ of education, first they were degraded as schools when the Sinhala south had four universities – two of them were Sinhala-Buddhist seminaries elevated into universities.

Until ‘nationalisation’ some of the Tamil institutions were collegiate institutions producing pioneers of Tamil studies like CW Thamodarampillai, astronomers of international reputation like Ambalavanar Allen Abraham and professionals in medicine and engineering who served all over the world.

Destroying the link of school and collegiate education of Tamils by the monopoly of the so-called ‘national’ universities, standardisation, proportional admission etc., genocidal Sri Lanka has now entered into the tertiary stage of erasing the identity of all Tamil educational institutions right from the school level.

An incident that took place last week when Jaffna school students went to the South to participate in a ‘national’ cadet camp would show how education in a ‘national’ institution is going to be a daily torture for the Tamil school children, commented a person connected to educational administration in the North.

Colombo nowadays targets luring the diaspora alumni associations of leading schools of Tamils, through petty offers like buildings, swimming pools etc., while the policy is to erode the very foundation of Eezham Tamils having education with their Eezham Tamil identity.

Some leading educational institutions of Jaffna have already been polluted by structures built by hands stained by the blood of Tamils. In the next stage, some of them will be ‘converted’ into ‘national’ institutions to accommodate the demographic engineering of genocidal Sri Lanka. Eventually, the diaspora alumni associations may have to prepare themselves to send funds for the ‘foreign education’ of Tamil children affected by the ‘national’ institutions, like what the ‘Ceylonese’ in Singapore and Malaysia are doing now, was the comment of a diaspora activist.

There were three Tamils among the prominent educationalists at the national conference of the Lakshman Kadirgamar Institute on last Tuesday, sharing the sessions with ‘terrorism’ professor Rohan Gunaratna.

Mr. Sundaram Divakalala, a former secretary of the North-East provincial education, asked for more funds to the education of Vanni to promote ‘national reconciliation’.

Mrs. Imelda Sugumar, Sri Lanka Government Agent of Jaffna, spoke on 600 odd child abuse cases of girls between 10-12 years annually reported in Jaffna and in islands off the peninsula including Delft.

Dr Rajasingham Narendran, formerly served in Saudi Arabia as associate professor was hopeful of ethical education meeting the challenge of reconciliation and social harmony in the island.

The way structural genocide is accelerated by Sri Lanka, Eezham Tamils would be constantly needing more and more educational ‘spokespersons’ to the futile exercise of endlessly pleading with colonial Colombo on funds, abuses, ethics and many more, commented the educational administrator in Jaffna.