The United Nations Human Rights Council has backed a resolution urging the Sri Lankan government to prosecute commanders guilty of misconduct during its civil war against Tamil insurgents. 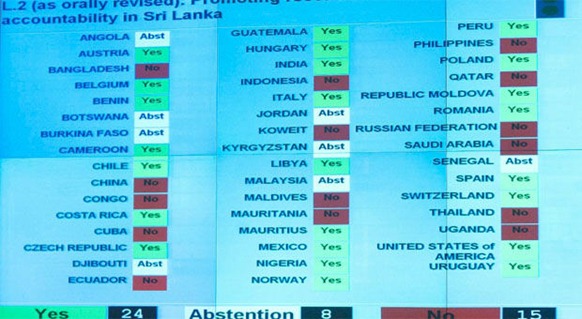 It voted in favour of a resolution calling on Sri Lanka to initiate "credible and independent actions" to ensure justice and accountability over alleged violations of international law during its civil war against ethnic Tamil insurgents.

A UN panel of experts, appointed by the secretary-general, reported last year that as many as 40,000 Tamil civilians were killed in the final weeks of the 26-year-long war. They found "credible allegations" of war crimes – by both sides, although they said that most of the civilians had been killed by government artillery, which even deliberately targeted hospitals.

The UN panel recommended to the secretary-general that he establish what they called "an international mechanism" with a mandate to independently investigate the alleged violations of international law.

The US-led resolution was passed on Thursday with 24 in favour, 15 against and eight absentions. Russia and China were among the countries voting "No" – but India broke ranks with Asian members of the council by voting in favour of the motion. The HRC has 47 member nations.

"The Sri Lankan government had an aggressive campaign to defeat this resolution," she said. "But a sufficient number of countries knew that justice is needed in order to achieve reconciliation."

Fred Carver of the London-based Sri Lanka Campaign for Peace and Justice said the Sri Lankan government had tried to paint the issue as one of east against west. "In reality," he said, "it has been the Sri Lankan regime against its own people.

"Many of the nations that supported Sri Lanka in 2009, such as Nigeria, Cameroon, and India, have realised that they were lied to and today took the courageous step of supporting the resolution."

Channel 4 News approached the Sri Lankan government – which sent a delegation of an estimated 100 officials to Geneva to lobby against the resolution – for a response to today’s vote but we have not received a reply. The allegations are addressed on the website of the Ministry of Defence and Urban Development

In Sri Lanka’s opening statement to the council, last month, Mahinda Samarasinghe MP, co-chair of the Sri Lanka Committee on Human Rights said: "One thing is certain – the story of tens of thousands of civilian deaths that supposedly occurred during the final phase is very clearly proved to be a gross exaggeration and a deliberate misrepresentation of fact."

Sri Lankan officials in Geneva were accused by the UNHRC and by human rights groups of intimidating and harrassing demonstrators – most of whom were Tamil – and their families back in Sri Lanka. Many had their photographs taken by government agents. In Sri Lanka, Sinhalese protesters were named and shamed and branded "traitors" on state-owned television news.
Vani Selvarajah, spokesperson for Tamil diaspora groups said: "Although we would have preferred the resolution to establish an international commission of inquiry, we see this as an incremental first step towards establishing a proper mechanism towards accountability in Sri Lanka."

Thursday’s vote represents a dramatic volte face by the UNHRC, which, just two weeks after the end of the war, in May 2009, passed what international human rights groups branded "a deeply flawed resolution" effectively congratulating the Sri Lankan government on its victory.

That resolution was passed with 29 votes in favour, 12 against and six abstentions. It commended the Sri Lankan government for its policies and did not address serious allegations of human rights and humanitarian law.

Back in May 2009, the majority of Council members had ignored appeals for accountability by UN Human Rights Commissioner, Navi Pillay. This year, she told the council that the Sri Lankan government’s "Lessons Learned and Reconciliation Commission" – set up to address a growing international clamour for accountibility – had failed to do so.

In August 2009, Channel 4 News first broadcast horrific footage, filmed on a mobile phone, which purported to show Tamil prisoners – bound, blindfolded and naked – being summarily executed by Sri Lankan soldiers. In a subsequent UN investigation, this footage was verified by independent experts, although the government always maintained it was fake.

A constant stream of further video evidence and eyewitness testimony from survivors built up a picture of widespread and systematic atrocities committed by government forces, particularly in the latter stages of the conflict. Not a single soldier or officer with command responsibility has been held to account for alleged violations of the laws of war.

Senior serving military officers and other well-placed professional and Sri Lankan government sources have testified to Channel 4 News that responsibility for the alleged crimes "goes right to the top" – pointing at the Rajapaksa brothers. One of them, Mahinda, is president. Another, Gotabaya, is defence secretary, and a third, Basil, is a former presidential adviser and is currently a cabinet minister.

Those who have spoken to Channel 4 News chose to remain anonymous owing to widespread fears of recrimination. Human rights groups say that abductions, disappearances and killings are still commonplace in Sri Lanka. Arbitrary arrest and torture in detention has also been widely reported. One of those accused is Major-General Shavendra Silva, former Commander of Sri Lanka’s 58 Division, which played a major role in the final showdown. Since 2010 he has been Sri Lanka’s deputy ambassador to the United Nations.

Following transmission of the Killing Fields film last June, Prime Minister David Cameron told the House of Commons that the Sri Lankan government and the UN needed to investigate what he called the "worrying events" described. The lastest documentary names as possible suspects Shavendra Silva and another commander, Major-General Prasanna De Silva, who is serving as defence attache at the Sri Lankan High Commission in London.

Last week, War Crimes Unpunished was broadcast on an Indian television channel. The revelations contained in the programme provoked demonstrations in Chennai calling on India to support the UN resolution. Counter-demonstrations took place in Colombo.