DMK president M Karunanidhi on Thursday termed ‘Tamil Eelam’ his unrealised dream and said he will fight for its realisation.

Asked by reporters in Chennai on his reaction to passing of US-backed resolution against Sri Lanka in the United Nation Human Rights Council (UNHRC) and whether there is a possibility of Tamil Eelam in the future, Karunanidhi said, "As far as I am concerned that is the goal."

He said even in the past, whenever he was asked about his unrealised dream, he had answered "Tamil Eelam".

M Karunanidhi thanked Prime Minister Manmohan Singh for India voting in favour of the US resolution. 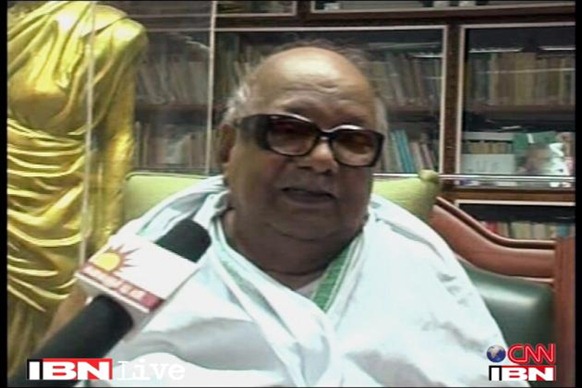 To another question, he said the war between the Tamil militant groups to establish who is big and who has the capability to achieve the goal prevented the formation of Tamil Eelam.

He thanked Prime Minister Manmohan Singh and United Progressive Alliance chairperson Sonia Gandhi for India voting in favour of the US resolution.

Karunanidhi said he has faxed a letter to Manmohan Singh and Gandhi urging them to suitable action to prevent attacks on Tamils in the island nation as a retaliatory action to the resolution.

To a query that India voted in favour of the resolution only due to the pressure exerted by DMK and the party could have given a similar pressure three years back when the fight between the Tamil Tigers and the Lankan army was on, Karunanidhi said: "We did give similar pressures and everybody knows who spoilt the views then."

On the assistance to be given to Lankan Tamils by the Indian government, Karunanidhi said, "We have told the centre as to what has to be done and the centre too has listed them out."

Karunanidhi said the passing of the resolution will pressurise the Lankan government to atone for the atrocities they had committed to the Tamils there.