Sri Lanka has seen greater security since the end of the bloody civil war with the Tamil Tigers, but dissenters are routinely threatened and 32 activists have disappeared in the past six months. 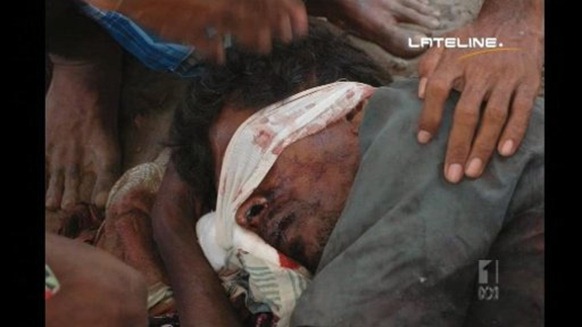 TONY JONES, PRESENTER: The United Nations is tonight debating a resolution calling on Sri Lanka to investigate alleged war crimes in the final months of the civil war.

The end of the bloody conflict with the Tamil Tigers that claimed 100,000 lives has brought greater security to most, but it’s come at the expense of democratic freedoms and human rights.

Dissenters are routinely threatened and Amnesty International reports that 32 activists have disappeared in the past six months.

ABC correspondent Richard Lindell filed this report from Sri Lanka. And a warning: this story contains images which some viewers may find disturbing.

RICHARD LINDELL, REPORTER: On the streets of Colombo, most are enjoying the benefits of three years of peace. The threat of terrorism has disappeared, bringing a freedom and sense of security not possible during the almost three decade civil war.

The economy is one of Asia’s fastest growing and tourists arrive in ever-increasing numbers.

In the north and at the former epicentre of the civil war, there are also some outwardly promising signs. New roads are being built, as are shopping centres and hotels. But here in Jaffna, the battle scars remain, as does the Army, and locals say the peace dividend is largely going to the Sinhalese majority of the south.

SARAVAN BAWAN, TAMIL NATIONAL ALLIANCE MP: What’s the big idea having infrastructure development without having the community being given any vocational training or education, etc. But nil, that is nil. So, we are forced to bring from down south for our development whoever takes the contracts. If you go and speak to the contractors, you’ll find everyone is from Colombo.

RICHARD LINDELL: The Army is also crowding out local business with interests in hotels, restaurants and farming. The military intrusion into daily life suggests the Army is here to stay and there’s no mistaking who’s now in charge. Dissent isn’t tolerated. Nearly three years since the end of the war, activists are still disappearing at an alarming rate.

Janatha Kugan’s husband is an ex-Tamil Tiger who was detained at the end of the war. When he was released, he earned a living as a truck driver, but when his brother was abducted, he started tracking missing persons, and then last December, he disappeared too.

JANATHA KUGAN, WIFE OF MISSING MAN (voiceover translation): Many people have seen, but nobody is ready to talk. The reason is fear.

RICHARD LINDELL: Janatha Kugan’s case is well known, giving her the courage to speak out. But she remains careful not to openly criticise the government and those responsible for leaving her and her nine-year-old daughter destitute.

JANATHA KUGAN (voiceover translation): The neighbours help some days. I have trouble in my heart. I can’t work. I am selling the firewood he purchased. When the firewood sells out, I don’t know how to manage our life.

JEHAN PEREIRA, NATIONAL PEACE COUNCIL: What is particularly disturbing is that in these cases where people disappear or are killed in mysterious circumstances, there is no police success in tracing the wrongdoers. So there is a sense that we cannot cross a certain line or else we fall into serious trouble and that leads to self-censorship.

RICHARD LINDELL: And that includes most of the media, which has been cowed by years of intimidation.

34 journalists have been killed since 2005, often for reporting on alleged war crimes. A UN report released last year was critical of the Tamil Tigers for using civilians as human shields and the military for indiscriminate shelling in civilian areas.

The government has defended the Army’s final thrust, but the ABC has obtained these previously unpublished pictures taken during the last days of the war. They appear to add to an already considerable body of evidence of heavy civilian casualties in areas that still remain off-limits.

Some of these high-security zone are military bases or uncleared minefields, but there’s deep suspicion that some of these areas must contain the bodies of the 40,000 civilians the UN estimates were killed in the last months of the war.

JEHAN PEREIRA: And as for mass graves, yes, we have heard that one of the reasons why the military is not permitting people into certain areas is because they want to get rid of the evidence, but again, I don’t know whether that is true because there are also stories that the military’s setting up bases there.

Or that the government has plans to settle Singhalese in those areas to gradually change the ethnic demography of that part of the country. The central problem is that there is no transparency.

RICHARD LINDELL: After initially denying large-scale civilian casualties, the government now says 8,000 were killed. The real number may never be known and many still don’t know what happened to their loved ones.

Ananthy Sasitharan’s husband was a senior Tamil political leader. He surrendered in the final days of the war and hasn’t been seen since.

Ananthy Sasitharan holds out hope that her husband is among the hundreds being held without charge.

ANANTHY SASITHARAN, WIFE OF FORMER TAMIL POLITICAL LEADER (voiceover translation): I believe my husband is being kept in a hidden place. If the government released him, the war crimes would be exposed. The government fears that. That’s the reason the government is not ready to release my husband.

RICHARD LINDELL: Under intense international pressure, the government set up the Lessons Learnt and Reconciliation Commission which handed down its findings last December. Despite its narrow terms of reference, the commission made important recommendations, including a full investigation into missing persons and justice for those illegally killed during the war.

Lateline made repeated but unsuccessful requests for a response from the Sri Lankan government. However the governor of the Northern Province did agree to interview, but refused to answer what he called controversial questions.

The government’s own Lessons Learnt and Reconciliation Report recommends a full and proper investigation into the abductions, into the alleged war crimes of the last months of the war. Will the government implement the recommendations of its own report?

G. A. CHANDRASIRI, GOVERNOR OF THE NORTHERN PROVINCE: Yes. Now, I’m a provincial governor. I don’t think I can give a direct answer to that question. Because I can say something in this area, yes. So I think I few – that type of question should be (inaudible) for the government.

RICHARD LINDELL: Anathy Sasitharan gave evidence to the commission, a move that saw her harassed by the police.

ANANTHY SASITHARAN (voiceover translation): If I don’t talk, my husband won’t come. I don’t need a life without my husband. If I am silent, the missing persons will never be found. If anything happens to me tomorrow, the government will be responsible for it. The international community and others will question the government.

RICHARD LINDELL: It’s the kind of scrutiny the government is looking to avoid. It’s organised street protests against a US-sponsored resolution before the UN that calls for Sri Lanka to implement its own report and allow international monitoring.

ROISHAN MOHAMED, PROTESTOR: The peace is here now. Now war is over. Now let America allow us, you know, to live peacefully, you know. Not to put – not poke hands into Sri Lankan activities.

RICHARD LINDELL: For now most Sri Lankans appear willing to give up some of their democratic rights to a government that crushed the Tamil Tigers and ended the bloody civil war.