(Dr. Dayan Jayatilleka) Let’s learn the right lessons from the Geneva outcome, not the wrong ones. It is not the case that a small country such as Sri Lanka cannot fight a diplomatic battle with the mighty USA and win.  Minutes after the Sri Lanka vote at the HRC this time, the Cubans moved a resolution on the composition of the staff of the Office of the UN High Commissioner for Human Rights, the opacity (code-named independence) of which the West regards as a holy of holies. The USA opposed the resolution. The Cuban resolution won with a massive 33 votes. 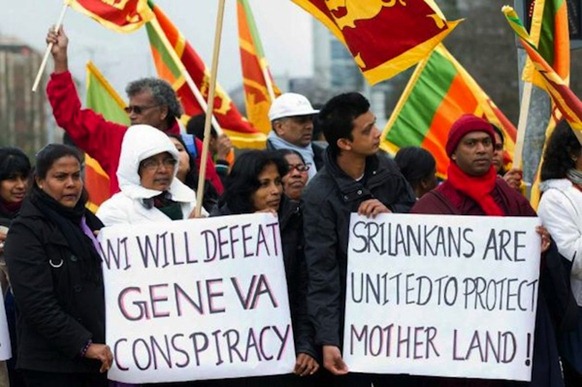 Last year the USA invested far more effort and political capital at a far higher political level than in the case of the Sri Lanka resolution in Geneva, to prevent Palestine from being granted full membership of the UNESCO in Paris. The US lost that battle, and besieged Palestine, an embryonic or proto-state (unlike Sri Lanka) won a two thirds majority.  The battle was fought by a core quartet comprising two Palestinian diplomats –the impressive Left Bank intellectual Ambassador Elias Sanbar, his deputy Munir –and the Permanent Delegates of Egypt and Saudi Arabia. (The Palestinian Foreign Minister Riad Malki addressed the Council after the victory to thank the member states). I was privileged to be a participant in that historic struggle.

Even in the case of the Special Session on Sri Lanka in the UNHRC in Geneva in May 2009, we have confirmation from Wikileaks that the USA ‘led from behind’, with Secretary of State Hillary Clinton instructing the US Mission thus: “…the USG [US Govt] supports a special session on the human rights situation in Sri Lanka and related aspects of the humanitarian situation. Mission is further requested to provide assistance, as needed…in obtaining others signatures to support holding this session…Mission is also instructed to engage with HRC members to negotiate a resolution as an outcome of this special session, if held. Department believes a special session that does not result in a resolution would be hailed as a victory by the Government of Sri Lanka…”[Cable dated 4th May 2009 from Secretary of State (United States)] Sri Lanka won that battle, of course, with more votes (29) than the sole superpower, the US, managed to secure this time (24) even with that of the regional superpower.

A few weeks after our success in Geneva, Prof Emeritus Miguel Alfonso, the pony-tailed eminence grise who, as co-director, trained generations of Cuban diplomats at the higher Institute of International Relations, Havana’s diplomatic training academy, caught up with me in the Council to say that he had just drawn up a three-hour long training module, the subject of which was Sri Lanka’s fight-back at the Special Session, as a model of how a small country can successfully resist a diplomatic offensive by the global North. Meanwhile Emeritus Professor Richard Falk of Princeton also told me that in the High Commissioner’s Office, it was ruefully said that our counter-offensive was a ‘textbook model’.

The classic example of how to beat the US in a diplomatic battle is Cuba, which moves a resolution against the blockade every year at the UN General Assembly in New York and secures a mammoth victory of 190 votes in favour and 3 against.

The examples of Palestine (2011), Cuba and Sri Lanka (2009) have one thing in common: you can resist the West successfully only if you have built a sufficiently broad cross-regional coalition, a global united front. Such a counter-hegemonic bloc is predicated upon support in one’s own region, from among one’s own neighbours. India’s decision to support the US resolution came as a shock. Yet, it shouldn’t have. There can always be ‘black swan events’ but those are pretty much unpredictable. Other events can be anticipated if preceded by accurate analysis. The Indian turnaround was not only predictable; it was predicted and therefore preventable, and yet it wasn’t. I wrote the following, six months ago, ringing the alarm bell regarding the UN Human Rights Council when there was time enough to do something:

“If one has to identify a single critical or crucial variable for Sri Lanka, it is India, but our strategy cannot be reduced to Indian support…A few weeks after we fought and won our battle in Geneva in May 2009, Myanmar lost in the same forum though it had the votes of India, Russia and China. So the secret of our victory in 2009 was not simply and solely India…We will find it almost impossible to win without India’s support, and we cannot win if India ever turns against us, but we cannot win only with India’s support.   We must always remember that many Asian, Middle Eastern, African and Latin American states will take their cue from India. India has a wide presence and is widely respected among Sri Lanka’s friends. We must rally our neighbourhood in our support. We must have the solid support of our continent, Asia. We must balance the South against hostile sections of the North, and the East against hostile sections of the West. India is pivotal in all these defensive moves and it is difficult to implement any of them if India is against or conspicuously on the sidelines. If, as some critical commentaries assert, India’s position has changed, or is changing, or might possibly change, from that of our May 2009 UN HRC victory, we must seek out the reasons and rectify them jointly.

We must certainly strive to countervail the mounting anti-Lankan opinion in Indian civil society and the media, militant opinion in Tamil Nadu and the lobbying of certain Western elements. We must secure Delhi’s support and swing Indian public and political opinion firmly over to Sri Lanka’s side. This cannot be done by purely verbal means but by policy reforms. As a UN based top official of Sri Lanka’s firmest, most powerful international friend told me once, ‘short of capitulating on or compromising its vital security interests, Sri Lanka must do what it takes to help its friends to help it’.” (‘Defending and Protecting Sri Lanka’, Daily Mirror, September 29th, 2011, my emphasis, DJ)

My warning six months back was no one-off flash of foresight. The danger of an Indian shift and what should be done to forestall it was set out in cold print by me as long as three years ago. In an article that appeared exactly three months BEFORE the death of Prabhakaran, entitled ‘The Indian Reality in Sri Lanka’s Existence’ I wrote:

“…India cannot afford recrudescent Tamil Nadu separatism which thrives on the charge that New Delhi is insensitive to Tamil Nadu’s feelings for their ethnic kin in Northern Sri Lanka. Tamil Nadu… is an important and influential component of the Indian Union, and when push comes to shove, carries far more weight than Sri Lanka and the Sinhalese, in New Delhi, Washington, Moscow and Beijing. If faced with a serious strategic choice, Delhi will choose Chennai over Colombo. It is up to Sri Lanka to prevent matters coming to that…

Sri Lanka needs to countervail and neutralize the anti-Sinhala extremists in Tamil Nadu and the Diaspora…The balanced solution of fullest autonomy within a unitary framework may be opposed by smaller extremist forces among the Sinhala majority. The grim reality though, is that even at their most disruptive and violent, these forces can do much less harm to the Sri Lankan state than a decision by India, under mounting Tamil Nadu pressure, to tilt against Sri Lanka, and a corresponding decision by India’s partner the USA to mount economic pressure on Sri Lanka through multilateral institutions and agencies. Under the unlamented Bush administration there was daylight between the positions of the US and the EU. Under the new and universally welcomed Obama administration there may be no daylight between the positions of the US, EU and India.” (‘The Indian Reality in Sri Lanka’s Existence’, Groundviews, 16 February 2009)

I had quickly returned to the theme in the next month, again before the war was won, in a piece significantly entitled ‘Winning Locally, Winning Globally’:

“The Sinhalese and Tamils are in a Mexican standoff. Locally, the Sri Lankan armed forces have surrounded the Tigers…Meanwhile, globally, from the US Senate to the UN Security Council, from Ottawa to London, from Brussels to Pretoria, from Delhi to Dili, Sri Lanka is under pressure and scrutiny as never before. Are we being encircled globally just as we have encircled the Tigers locally…The Tigers have no exit from military defeat, but do the State and society have an exit from the crisis?” (‘Winning Locally, Winning Globally’, Groundviews, March 11, 2009)

In June–July 2009, in the immediate aftermath of the military victory and, more topically today, our diplomatic success in Geneva at the UN HRC, I repeatedly stressed the point in what turned out to be a polemical exchange.

“…As the paradigmatic victory in Geneva showed, we can win against the Tiger Diaspora and the Western European bloc influenced by it, when we are supported by our neighbours, our continent and our natural constituency the developing world plus Russia. In this strategy the support of India is critical. Without India’s support, the rest will distance itself from us, leaving us wide open to Western pressure and coercion. China alone cannot carry the weight…” (‘13th Amendment: Why non-implementation is a non-option’, Groundviews, 13th June, 2009)

Sadly, this reality manifested itself in Geneva, on March 22st 2012.