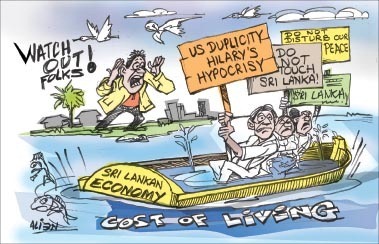 But for the Rajapaksas, the Geneva vote is a defeat; a defeat as needless as the battle itself.

The US stands accused of innumerable crimes and misdeeds, past and present, including conspiracies against sovereign governments, such as that other 9/11, the overthrow of the elected Popular Unity administration of Salvador Allende in Chile. But the American Resolution on Sri Lanka was not a conspiracy hatched in secrecy. On the contrary, Washington kept Colombo informed of it officially, from the very inception. Nor was it a unilateralist move. The Americans seemed keen to make the Resolution a consensual one and Minister G. L. Peiris was invited to visit Washington to participate in the drafting process.

Unfortunately Colombo refused to avail itself of the opportunity of shaping and changing the Resolution by engaging with the US, ideally with Indian help. Nor did it choose to selectively oppose this or that clause in the Resolution. Instead the Rajapaksas decided to reject the Resolution in toto while their acolytes went into attack-mode, screaming invective. Though the Resolution basically asked for the time-bound implementation of LLRC recommendations, the regime acted as if it was being ordered to succumb to colonial-subjugation or condone territorial-decapitation. Geneva was turned into a battleground with a mammoth 50+ delegation waging war for the King and the Family.

The regime would have known that patriotic raving and ranting in Colombo will not have the slightest impact in Geneva (or Washington or Delhi). But the need for exhibitionism overshadowed sober considerations and intelligent thinking. Truth and accuracy were relegated into oblivion as hyperbole became the ruling deity. The Rajapaksas expressed willingness to sacrifice their lives to defend the country from an American invasion while various acolytes screamed their determination to ride the same tumbrel with the Siblings all the way to the guillotine. It mattered little that an American invasion of Sri Lanka is impossible unless Rick Santorum wins the US presidency and mistakes Colombo for Tehran! Or that the Rajapaksas will be taken to any execution-block, even if the impossible happens and they are indicted at The Hague, because the ICC does not accept capital punishment!

The final vote-tally indicates that had India opposed, or even abstained, the Resolution could have been defeated. The Rajapaksas had become accustomed to treating India in a rather cavalier fashion. This habit of taking Delhi for granted prompted Minister Mahinda Samarasinghe to blithely announce India’s opposition to the Resolution in his initial speech to the UNHRC. Unfortunately for the Rajapaksas that condescending pronouncement may have been the straw which broke the normally phlegmatic Indian camel’s back. Minister Samarasinghe’s inanely provocative statement gave rise to another (unnecessary) battle, between Tamil Nadu and Colombo, for Delhi’s soul. Tamil Nadu won, because a Congress administration beset by problematic allies was unwilling antagonise the DMK. But was Delhi’s volte face also motivated by the very belated realisation that it has – and will have – nothing to show for its policy of constructive engagement vis-à-vis Colombo, because the Rajapaksas never deliver on their promises?

The Geneva debacle and the Indian volte face could have been avoided had the regime honoured at least some of its many undertakings, particularly its frequent pledges to implement a political solution based on 13th Amendment plus. 13+ means transferring some/most/all powers in the concurrent list to the provincial list, and this could have been done without a referendum. The TNA may not have been satisfied with 13+, but it would have sufficed for moderate Tamil parties like the TULF, India and most of the West. The UNP could not have opposed it, and the JVP, in its current weakened state, would not have been able to mount anything more than a nominal fuss. 13+ was thus a viable, possible measure, which would have promoted reconciliation and solved or at the least alleviated Sri Lanka’s regional and international problems.

The Rajapaksas were/are loath to implement 13+ for the same reason they want to avoid making a time-bound commitment to implement LLRC recommendations. Both measures would impede Sri Lanka’s march towards despotism.

In the book he dictated during his final illness, Tony Judt opines, “If you look at the history of nations that maximized the virtues that we associate with democracy, you notice that what came first was constitutionality, rule of law, and the separation of powers” (Thinking the Twentieth Century). In Sri Lanka, within a democratic shell, constitutionality, the rule of law and the separation of powers are vanishing with worrying rapidity. It is happening not as a result of a natural erosion/corrosion, but consequent to a conscious and concerted effort by the Rajapaksas to strengthen Familial Rule and ensure Dynastic Succession. The Rajapaksas are jealous of their powers and want to retain absolute right to impose their will in matters major and minor – from land grabbing to holding night races in Kandy. They opposed the Geneva Resolution not because it violates national sovereignty but because it impedes Rajapaksa sovereignty.

Geneva was a debacle, but it is not Sri Lanka’s debacle.

Rajapaksa foreign policy is informed, contoured and guided by wild mood-swings, rather like some crazy pendulum incapable of occupying the middle-ground due to a built-in defect. When a world preoccupied with weightier cares and more immediate concerns leaves Sri Lanka to her own devices, as happens generally, Lankan foreign policy becomes almost infantile in its sanguinity. The international community loves Sri Lanka, we are told; and President Rajapaksa is the ‘World Conquering Leader’ who is teaching East and West the science of defeating terrorism, the art of resettling the internally displaced and the magic of transforming a war-torn country into a hub of all things good and great.

This vision in Barbie-pink becomes transformed into a nightmare landscape of traps, dangers and enemies in a nanosecond, the moment the West mentions accountability or India talks of devolution. Then the pendulum, which is our foreign policy, swings to the other extreme. President Rajapaksa becomes the Leader Menaced by Global Conspiracies and the international community, barring a few exceptions, becomes our enemy. In this version a viciously jealous world (Jathyantharaya in Sinhala) spends its days and nights in hatching venomous conspiracies to divide and decimate us.

So Lankan foreign policy swings from Panglossian blitheness to persecution mania, from self-replete stupor to febrile hyperactivity and since the Ruling Siblings believe that the world is preoccupied with them, their foreign policy is characterised by a tendency to think in superlatives and exaggerate beyond measure. A common or garden meeting between President Rajapaksa and a Western leader is presented as if it is an earth-shattering event; a standard critical comment about Sri Lanka’s human rights performance become a diabolical conspiracy aimed at regime-change or territorial decapitation.

If Rajapaksa foreign policy was a man, he will be locked up in a lunatic asylum for multiple delusional disorders.