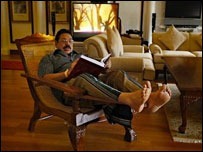 The Sri Lanka government has ruled out holding a referendum over whether to implement recommendations of government appointed war panel.

Leader of the House, Minister Nimal Siripala de Silva, told journalists in Colombo that it is illegal to hold a referendum on the recommendations of the Lessons Learnt and Reconciliation Commission (LLRC) as the voters may need to answer few questions as opposed to a single question.

He was responding an earlier suggestion by Housing Minister Wimal Weerawansa to get a mandate from the public before implementing the war panel report.

Minister de Silva, who pledged to implement the panel’s recommendations when he tabled it in parliament in December last year, also said that the government will only be implementing some selected measures suggested by the panel.

“The LLRC is not the Bible or the Dhammapada. Yes it was appointed by the government but we need to weigh pros and cons before implementing it and there is no question whether it will be fully implemented,” he said.

He, however, stressed that the decision by the government to implement selected recommendations has nothing to do with international pressure or due to the UN Human Rights Council (UNHRC) passing a resolution on Sri Lanka.

“It took South Africa years to implement such measures. The United States and UK did not implement similar measures for years but we are being pressured to implement this as soon as possible,” said Minister Nimal Siripala de Silva.

“That is why we said it is unfair to only exert pressure on us.”

Meanwhile, the Foreign Minister GL Peiris confirmed that the government is working into close some Sri Lankan missions in Western Europe.