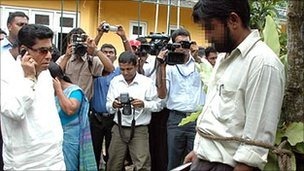 He said no-one could condone or justify remarks made by Mervyn Silva, who on Friday threatened to "break the limbs" of those who "betrayed" the country.

The row comes days after state TV channel ITN broadcast pictures of journalists and rights workers it labelled as "disloyal" and "traitors".

However, Mr Peiris declined to criticise the network.

All those criticised by ITN had allegedly gone against the government at the UN Human Rights Council, which last week passed a resolution critical of the country’s rights record.

Mr Peiris said the people depicted in the thinly disguised pictures on ITN had been making "false and malicious allegations harmful to the national interest".

"Confronted with that situation, I don’t think you would seriously question that some people would react very strongly," he said.

The police have said they are looking into Mr Silva’s speech, in which he also said he was responsible for a journalist fleeing the country having been beaten up.

Reacting to the foreign minister’s comments, one of the human rights activists who was criticised by ITN, Paikiasothy Saravanamuttu, said the government was responsible for "spewing out hate" in the state media.

He said the authorities should be protecting him and other Sri Lankan citizens but were instead vilifying and abusing them.