The statues of Mahatma Gandhi, Swami Vipulananda, Pulavarma’ni Periyathampi-pi’l’lai and Baden-Powell revered by Eezham Tamils in the heart of Batticaloa city have been desecrated and destroyed in the early hours of Friday. The statues of Gandhi and the founder of Scout Movement Robert Baden-Powell are located near the clock tower in the city centre. Renowned Tamil scholar and Hindu reformer Swami Vipulananda and Tamil Poet Pulavarma’ni Periyathampi Pi’l’lai, both were born in the Eastern Province. All the four statues are located within the perimeters of the high security area manned by the SL Police and the SL Army in the city. The latest desecration of statues comes as a result of anti-Indian and anti-western sentiments shown by the occupying Sinhala forces in the East, political observers said.

Meanwhile, genocidal Sri Lanka has deployed its occupying Sinhala military in hurriedly building Buddhist Stupas throughout North and East, including key locations in the major cities, to give a ‘new cultural identity’ to the cities and landscape of the country of Eezham Tamils.

In November 2011, when TNA leader R. Sampanthan was on an international visit, the statue of Thanthai Chelva was decapitated in Trincomalee.

The occupying STF commandos of the SL Police in Batticaloa were deployed Friday morning at the sites of the destruction as tension prevailed in the city. The public market was closed down.

The statue of Mahatma Gandhi at the heart of the Batticaloa city was put up in 1960s during the times of the Tamil parliamentarian C. Rajadurai.

The headquarters of the Sri Lankan police in Batticaloa is situated 200 meters east of the Gandhi statue and the residential quarters of the SL Police officials is located 150 meters close to the site.

The occupying SL military’s headquarters in the district is also located close to the Gandhi statue.

SL policemen guard the residence of the president of Batticaloa municipality, which is situated close to the statue in the south.

Swami Vipulananda’s statue is also located next to the prison guarded by the SL Police in the city. It is located in the Ramakrishna Mission school situated in front of the Aanaip-panthi temple.

The desecrated statue of Poet Pulavarma’ni Periyathampi-pi’l’lai is situated on Muthaliyaar Road in the city.

Swami Vipulananda, a renowned Tamil scholar was the first professor of Tamil in the University of Ceylon, Colombo, and in the Annamalai University in Tamil Nadu. He was born in Kaarai-theevu in the Ampaa’rai district of the Eastern province.

He joined the Ramakrishna Mission and played a vital role in the educational development of the Eezham Tamils by establishing several educational institutions in the Tamil homeland.

Pulavarma’ni Periyathampi Pi’l’lai, born in Ma’ndoor, Batticaloa, in the 19th century was a poet and a remarkable scholar in classical Tamil. He was a student of Chunnaakam Kumaraswamip Pulavar. Periyathampi-pi’l’lai was a pioneer in reviving Tamil studies in the East during the British colonial times.

In January this year, the statue of Swami Vivekananda, well known Indian spiritual leader and Hindu reformist, located in front of a fuel station on Batticaloa–Kalmunai Road was destroyed by a motorbike squad. 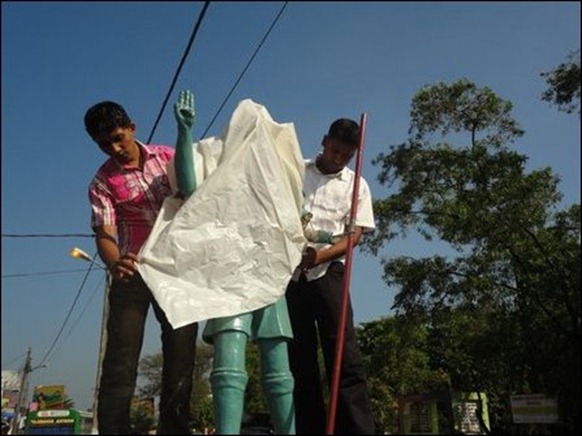