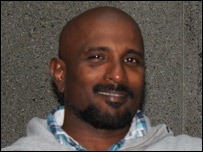 The wife of a disappeared political party leader in Sri Lanka has appealed to the United Nations and the Australian government to help finding him.

In an appeal to the UN Human Rights Commission, Mr Gunaratnam’s wife Champa Somaratne said: “We are extremely concerned for his safety and feel that he is faced with imminent danger to his life.”

Speaking with BBC Sinhala service Sandeshaya from Australia, she said she also appealed to the Australian government.

“I told them that my husband was arrested in Sri Lanka on 06 April by an armed group and I believe that the arrest has happened with the blessing of the government,” said Dr Somaratne.

The Frontline Socialist Party (FSP), a breakaway group of Janatha Vimukthi Peramuna (JVP), said both Gunaratnam and Attygalle went missing after attending a meeting on Friday to organise the FSP’s first convention on Monday.

Dr Somaratne, a former JVP activist recalled how she, together with two children, were detained for 18 hours at Colombo’s international airport on 02 January as she was boarding a plane to Australia.

“When I detained at the airport they repeatedly questioned about my husband. Therefore I clearly see a link between these two incidents,” she told BBC Sandeshaya.

She was not aware of her husband committing any crime in Sri Lanka, said Dr Somaratne, apart from exercising his rights as a citizen by getting involved in politics.

“My first suspicion is towards the governments, police CID and the ministry of defence,” said Dr Somaratne.

Sri Lanka government has, however, rejected the accusation that it was behind the disappearance.

Spokesman for the ministry of defence, Lakshman Hulugalle, told BBC Sandeshaya that the current government has no need to abduct political activists.