If Sri Lanka is fast becoming a pariah state in the eyes of the world, it has nothing to do with the recent UNHRC Resolution.

The writing has long been on the wall. As a nation, we are ruled by a group of men who seem to have nothing but contempt for the rule of law, let alone for truth in the public sphere. Violence and threats of violence against critics, the suppression of media freedom, extra-judicial killings, misplaced economic priorities and corruption on a scale that made even previous governments look clean, have become the order of the day. 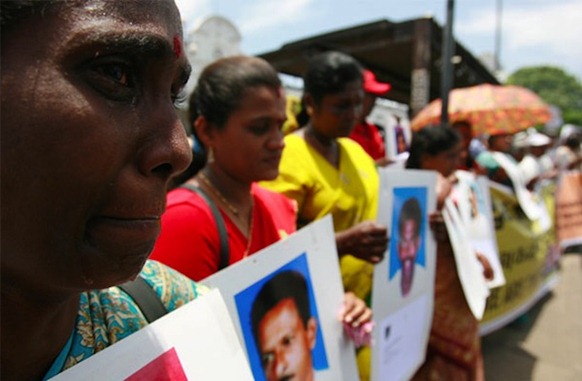 The minimal definition of government has to do with the rule of law: namely, that as a people we should be governed not by arbitrary fiat but by a system of laws to which the law-makers and law-enforcers themselves are accountable. The opposite of government is sovereign will, where the King/President decides what is “good for the nation”, and changes his mind from day to day- and uses the police and army not to uphold the law but to carry out his private will.

To some extent, the LLRC Report draws attention to this pitiful state of affairs. It is unfortunate that the so-called international community has focused so much on alleged war crimes and the protection of minorities; important as these are, they are part of a bigger picture of the steady erosion of respect for human life and freedoms that has been orchestrated by the ruling regime before and after the end of the war.

Indeed the LLRC Report was roundly criticised by the TNA for, among other things, its lack of attention to the carnage inflicted by all sides in the closing months of the war.  So to label the Resolution’s insistence on the implementation of the Report as evidence of “pro-Tamil” sentiments is the height of ignorance or deliberate mischief.

The spate of abductions and “disappearances” has gone unabated and affects Sinhalese as much as Tamils. Clearly criminal gangs and paramilitary groups are operating with impunity under the protection of politicians. No citizen today who lacks family or political connections to the ruling regime can expect protection from the judiciary or the police. Is it surprising, then, that we have to look beyond our shores for assistance in restoring proper governance in this country?

No doubt the big world powers are all hypocrites and practise blatant double standards when it comes to war crimes and other human rights abuses.  But nobody can say that the US, Europe and India do not practise the rule of law within their borders. There is a vibrant civil society in India, and an independent news media, that puts Sri Lanka to shame. We have been reduced as a nation to becoming an economic colony of the Chinese. I am amazed at how our Buddhist nationalists who protest outside Western embassies in Colombo, are silent about the brutal destruction of Buddhism in Tibet and other parts of China (or the imprisonment of Buddhist monks by another “friend” of ours, the military junta in Burma).

The way leading members of the ruling regime have responded to the UNHRC (before, during and after the Resolution was passed) demonstrates so clearly the need for such a Resolution. We have been treated to the pitiful spectacle of a foreign minister wasting huge amounts of public funds in desperate trips to Africa and Latin America to canvass support; and the continued use of the state media to whip up frenzy against local and foreign critics, instead of explaining to the populace the content of the UN Resolution; and the manipulation of schoolchildren as well as religious leaders, among others, to stage mass protests outside foreign embassies. Talking to some of the protestors, I found hardly any awareness of either the LLRC Report or what the UN Resolution was all about.

When proper government fails, so does diplomacy. Our diplomatic positions are occupied by men and women who have been rewarded, not for their diplomatic skills, but for having shown blind loyalty to the ruling regime.  It is hard to find a single professional diplomat among them. Post-Geneva, the ruling regime is still courting support from the worst dictatorships around the world.

One cannot help thinking that if only we had a foreign minister and diplomats who have the humility to listen to some of their own fellow-citizens, let alone receive counsel from other friendly governments, an honest compromise could have been achieved at Geneva.

It is still not too late for such humility. Surely the future of millions of young Sri Lankans is more important than the survival of a few ministers and ex-army officers?