Omanthai Checkpoint, 12.30am: As the conductor switches on the bright florescent lights inside the bus, the bus comes to an abrupt halt, jolting awake blurry-eyed passengers travelling from Jaffna to Colombo, who, in response to the instruction “okkomala bag arung eliyata bahinna…” (“Everyone, take all your bags and get off the bus…”), scramble around in search of their respective bags, still half asleep. Once having located their individual items of luggage, young and old alike, stumble out of the bus one after another and walk towards the takarung (metal sheet) shed, where males and females follow separate queues to have their bags checked by male and female army personnel, respectively. The checking too has now become so superficial and lackadaisical that it’s obvious it’s being conducted purely out of protocol, rather than as an actual security measure. 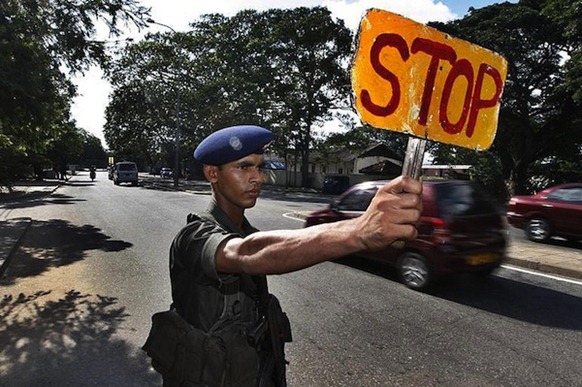 Omanthai, having been one of the, if not, ‘the’ largest Government controlled checkpoint throughout the war, remains to date, more so out of some sense of sentimentality, I believe, rather than any real necessity or rationality. I say this essentially because, only passengers travelling by bus, and not those travelling by private vehicle are made to endure the above mentioned humiliating ordeal. And if by chance any private vehicle passengers are made to follow suit, it is usually carried out in a rather ad-hoc and random manner, completely at the discretion of the army personnel on duty. Furthermore, passengers are only checked on their way down to Colombo from the North, and not on their way up (when they’re only made to present their I.D. cards for inspection.) Could this be a mere coincidence, or an extension of the majoritarian mindset of “we’ll be damned if we allow you to lay a finger on ‘our’ people in the South, but we couldn’t care less what you do to ‘yours’ in the North,” held by the State?

And if one were to further analyse this procedure from the point of view of the State, one would have to conclude that almost 3 years following the end of the war, all residual ‘terrorists’ (who have not only somehow miraculously escaped detention, abduction or being killed, but also opted not to flee the country,) will attempt to enter the Capital by bus, carrying their ammunition in their personal luggage, knowing full well that this mode of transport is the most susceptible to scrutiny and suspicion. Is this the State’s estimation of, and proposed grand plan to wipe out a terrorist organization that was able to outsmart (on many an occasion,) and successfully sustain a full-fledged war against a central Government for almost 30 years?

Not only is the justification of ‘national security’ often used by the State, fast becoming old and ineffective, but such futile measures also contribute significantly to deepen the ethnic divide still blatantly existent in our society. The general ideology (promoted, but not restricted to members of the State), that all Tamils are ‘potential’ terrorists and are thus guilty until proven innocent, is so closely intertwined with national security, that it has become largely ‘acceptable’ by society, as it is in the interests of the greater good. To add salt to the wounds, the fact that 95% of the average passengers of these buses are Tamil and therefore, may not fully comprehend Sinhalese (the sole language of instruction at the Point), is completely disregarded. The reality that most, if not all the soldiers manning the Omanthai Checkpoint are not proficient in Tamil, is also quite telling in terms of the complete non-recognition of, and lack of respect for the Tamil community. More often than not, Tamil passengers unfamiliar with the routine have to rely on the Tamil translation of a more seasoned traveller. This indignity is further heightened when each of these passengers are made to have their personal belongings rifled through, until such time that the army personnel is adequately satisfied of the innocence of the specific passenger in question.

If, as the State proclaims, it is genuinely working towards reconciliation and creating a lasting peace in our country, why then is it simultaneously nurturing and perpetuating such a polarized society?