The government of Sri Lanka gave an assurance of resettling all internally displaced people by the end of June. 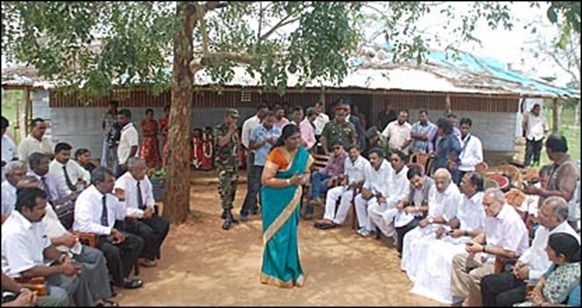 Gunaratne Weerakone, Minister of Resettlement told the BBC that the last phase of de mining will be completed before the end of June.

The minister was accompanying a visiting Indian parliamentary delegation to meet the war displaced in Menik Farm refugee camp on Wednesday.

Six thousand five hundred people still remain in Menik Farm refugee camp. They had been in the camp since June 2009.

Indian delegation says that they are determined to persuade the government of Sri Lanka to resettle the refugees back to original homes.

"We would like to draw attention to a request we made about resettling the war displaced to their original homes." N S B Chinthan, member of the Indian Lok Sabha told Dinasena Rathugamage of the BBC Sinhala Service.

However, Minister Gunaratne failed to assure the resettlement of the displaced back to their original homes.

"We will get them out of the camp, but resettling people in high security zone is a policy decision that I have no control over", the minister said.

In an earlier statement, the delegation reaffirmed India’s commitment to Sri Lanka’s unity and prosperity and called for progress in the dialogue for a political settlement on the ethnic issues with the minority Tamils.