While displaying a big show with welcoming posters particularly aimed at pleasing Sushma Swaraj, and with a dominated presence in receiving the Indian delegation, the SL colonial governor in the north, Maj. Gen. Chandrasri and SL minister Douglas Devananda, on the other hand played intrigues against the delegation, which were thwarted by the Deputy High Commission of India in Jaffna, news sources in Jaffna said. The delegation cancelled visiting Nalloor Kandasamy temple after being tipped on Devananda orchestrating a fishermen agitation in front of the temple during its planned visit. The SL governor ordered the secretariat officials not to attend a meeting convened by the delegation. On Thursday, the Sinhala colonial governor accused India for the delay in the construction of houses promised to the war victims. 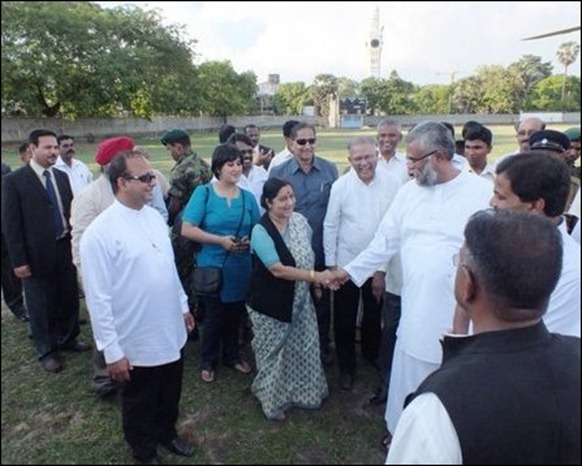 The Sinhala governor and a team of officials met the Indian delegation at Gnanam’s Hotel in Jaffna on Thursday. Media was not allowed inside. Only the reporter of the pro-government Dan TV was permitted.

After the meeting, addressing the media outside, the colonial governor and Devananda first started severely rebuking the media for what it brings out on the situation in the north. According to them normalcy has returned to Tamils but the media paints a negative picture. The scolding continued for a long time.

Then the colonial governor turned on India.

Sri Lanka government is not at all responsible for the delay in building houses, the Sinhala governor said.

It was initially said by the Indians that the allotment for each house was SLR 500,000. But they are now built at the cost of SLR 150,000. They only know what has happened to rest of the money, Chandrasri said.

According to the colonial governor, the houses should be uniform, but what has been constructed so far look different from one another. He preferred the money to be given to the people to construct the houses.

SL government has cleared the mines, released the lands, how could one blame it for the delay, he asked.

Devananda accused the TNA and its parliamentarian Mr. Sritharan as coming out with wrong figures on the IDPs waiting for resettlement. According to the SL minister only around 6000 remains to be resettled.

The blatant lies the SL government comes out with in statistics and in handing back villages and lands of the Eezham Tamils are well known to the public. But the Sinhala governor and the SL minister wanted their lies to go on record in the media, news sources in Jaffna commented. 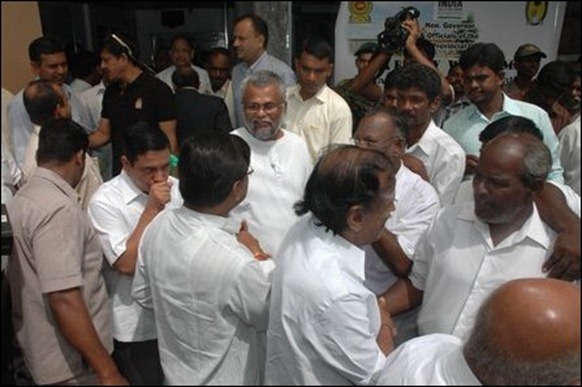 Meanwhile, on Thursday forenoon, SL minister and the EPDP paramilitary leader Doughlas Devananda planned a demonstration in front of the Nalloor Kandasamy temple, in the name of fishermen against the Indian parliamentary delegation, as the delegation had been scheduled to visit the temple.

Through arrangement with some fishermen associations under his control and mobilising EPDP supporters, he brought three busloads of demonstrators and they were waiting in front of the temple. But tipped on the demonstration, the Deputy High Commission of India in Jaffna, which is also located close to the temple, informed the delegation to cancel the temple visit.

A few representatives of the demonstrators later waited outside the Gnanam’s Hotel to handover a petition when the delegation came out of the hotel.

The delegation later went to see the Kaangkeasan-thu’rai (KKS) harbour developed by the assistance of India, before returning to Colombo.

The Indian delegation was irked by the simulated ‘fishermen’ demonstration of Douglas Devananda, news sources in Jaffna said, adding that it was very similar to the show he made during the visit of the US Asst. Secretary of State Robert Blake. 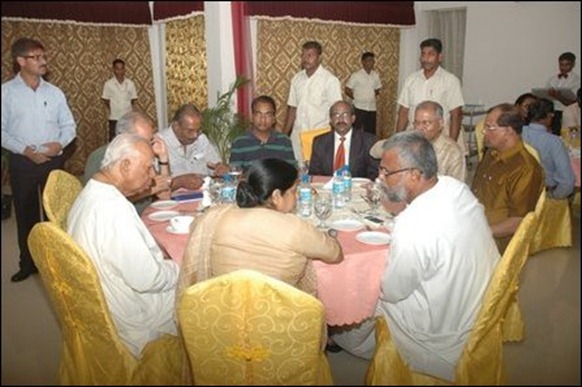 On Wednesday, while the delegation was meeting the TNA at the Deputy Indian High Commission in Jaffna, the SL minister and his parliamentarians were present at the scene with an air of spying.

According to a section of news sources, the EPDP demonstration on Thursday was retaliation.

On Wednesday night, Devananda gave a sudden order to his divisional heads to prepare for a demonstration. Since early hours on Thursday supporters were mobilised. Leaders of some fishermen associations, including from Vadamaraadchi, were summoned and were ordered to prepare a petition that would be handed over to the Indian delegation. Transportation arrangements were made by the EPDP. Only after coming to the temple the fishermen society leaders realised that the EPDP is planning to make it an agitating demonstration.

Meanwhile, in a tragic incident, a media person from Colombo was killed and many reporters were injured on Thursday. 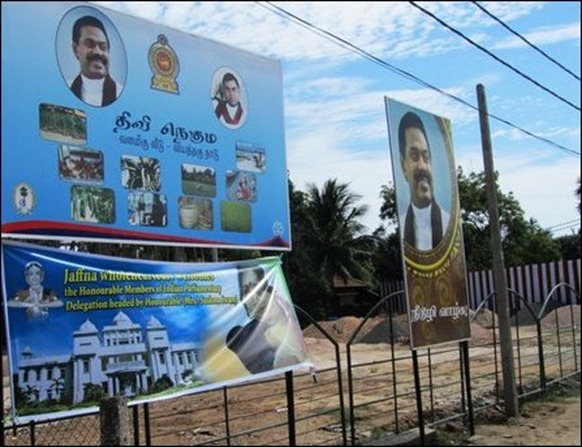 The EPDP has made arrangements for media coverage of the demonstration by hurriedly bringing in a group of reporters from Colombo media.

The vehicle they travelled met with an accident near Kurunakar in the early hours of Thursday. The chief reporter was killed and many others were injured. 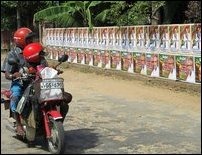 However it was learnt that the SL governor had ordered the secretary level officials of the province not to meet the delegation.

The TNA that met the delegation insisted on not delaying the political solutions and on going beyond the 13th Amendment, informed circles said.

TNA leader Sampanthan came from Colombo for the occasion in an SL Air Force flight. This is the first time in the last several years a TNA parliamentarian gets the SL Air Force facility.

Prof SK Sitrampalam led the civil society that met the delegation at a hotel in Jaffna.

The civil society representatives came hard on the situation marked by militarisation, colonisation, Sinhalicisation and Buddhicisation. Normalcy has returned is a talk of farce they told the delegation. 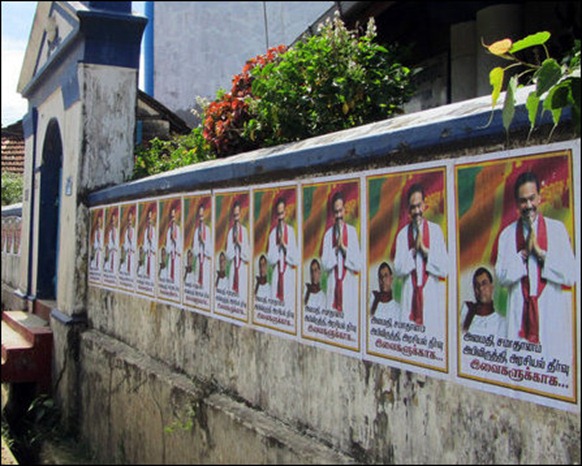