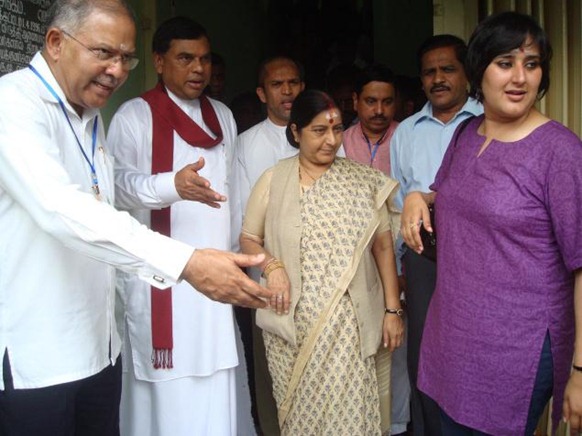 The Indian joint parliamentary delegation that visited Sri Lanka has urged the Government of Sri Lanka and “other stakeholders, including the Tamil National Alliance,” to resume dialogue and move towards an early political settlement.

Attesting that the Government-TNA talks were a lost cause, the delegation said: “We would earnestly suggest urgent consultations to create conditions for launching of the Parliamentary Select Committee.”

The MPs delegation hoped that the Government will “seize this window of opportunity and follow an enlightened approach to reach a genuine political reconciliation, based on a meaningful devolution of powers, which takes into account the legitimate needs of the Tamil people for equality, dignity, justice and self-respect. We have been assured in the past that this will be done within the framework of “Thirteenth Amendment – Plus”,” Sushma Swaraj, Leader of the delegation, said.

The delegation noted that the end of the armed conflict has provided “a historic opportunity for moving towards national reconciliation and political settlement. The report of the Lessons Learnt and Reconciliation Commission (LLRC) has underlined this and has made a number of constructive recommendations for addressing issues related to healing the wounds of the conflict and fostering a process of lasting peace and reconciliation in Sri Lanka. It is important that these are pursued with a sense of urgency. This is the message we have conveyed to our Sri Lankan friends during the course of this visit.”

On resettlement of Internally Displaced Persons, the team noted that a significant number of them continue to be in transit situations or with host families. “Our task will not be complete until they return to their original homes. Similarly, while there has been substantial progress in the area of rehabilitation and reconstruction, a lot remains to be done. We are prepared to assist in whatever way possible, in a spirit of partnership and cooperation,” Ms. Swaraj said.

The delegation said that discussions over the last four days have brought out clearly the need for expeditious implementation of the measures proposed by the LLRC with regard to information on missing persons and detainees, investigation of cases of disappearances and abductions, promotion of a trilingual policy, reduction of high security zones, return of private lands by the military and demilitarisation, including phasing out of the involvement of the security forces in civilian activities and restoration of civilian administration in the Northern Province. “We have noted the assurance given by the Government of Sri Lanka in Parliament that it will ensure the withdrawal of security forces from community life and confine their role to security matters,” she said.

The delegation visited several sites of Indian-aided projects, including railway projects in the North and the South, the housing project, Kankesanthurai Harbour, and some of the schools, hospitals and vocational training centres. “These projects gave us some satisfaction that India’s assistance, especially in the areas of humanitarian assistance, temporary shelter, housing, de-mining, education and vocational training, public health, connectivity, and revival of agriculture and other livelihood activities, has been able to make a difference to the lives of the people,” she said.

On the fishermen issue, she said that this was an emotive issue which must be handled with care on both sides. “As we explore possible solutions, both sides must ensure that there is no use of force against the fishermen and that they are treated in a humane manner. We were happy to learn that the Joint Working Group on Fisheries which met in January this year was able to look at various options to address this issue in a larger framework.