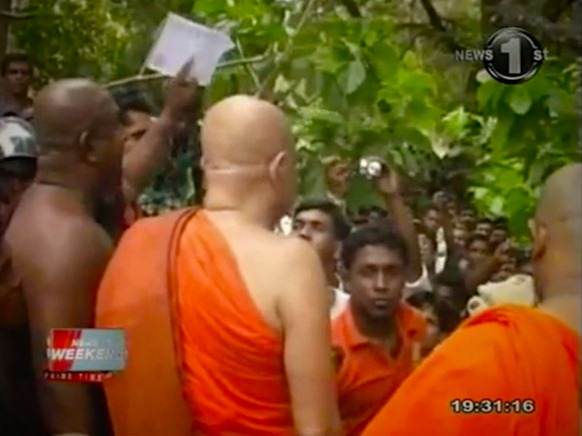 As noted by Raashid Riza, the Multimedia Editor of The Platform,

Last Friday a mob of about 2,000 Sinhalese, led by a group of Buddhist monks, stormed into a mosque in the historical city of Dambulla. They caused disturbances so severe that Friday prayers had to be cancelled. Reports suggest that the mosque had been hurled at with petrol bombs the night before, causing minor damage, and security forces were deployed to control the situation. The targeting of the Muslim community was instigated by a group of racist Sinhalese individuals, consisting largely of hooligans, who were motivated by the uproar and attention such an act would create, rather than by any identifiable ideology.

News channels have since broadcast footage from the incident. It is extremely disturbing, and warrants attention. Since the content is in Sinhala, we offer rough translations of the most disquieting sentiments.

00:47: Buddhist monk in orange robe: “The Provincial Secretary promised that on Monday, which is to say in two days, there will be a meeting at 3pm to take a decision on this matter.”

1:15: Buddhist monk in brown robe: “This is how the written promise came. Listen carefully. 2011.4.20. This is a historic day for us. In the Kingdom of Dambulla, in the absence of a Sinhala King, when there was no King… the Head Prelate, led by Ven. Jayaratana in front of the Buddhist clergy we will come to a verdict. This verdict is not just for Dambulla, but all of Sri Lanka… We are number one in self-governance. Because of this, against the courts, without the President, this written promise is a first, a victory for those who love the race (hela), have Sinhala blood, and are Buddhists. This is what it says. There are reports of an illegal Muslim mosque near the Rangiri Dambulu Temple. That a huge swathe of people were part of a protest is also reported. After 1.11pm no Muslim, for whatever reason – you can’t even go to the toilet – (derisive laughter from crowd) I promise to the Sinhala Buddhist people who love the country. Signed – is he Muslim? (derisive laughter from crowd) Senior Police Supervisor… With this victory, we temporarily depart. To be continued with your pooja.

3.20 to 6.20 features Sri Lanka’s Prime MInister speaking about the incident, which he said he first got to know about from the newspapers. He notes that for around 500 Muslims in the Dambulla area, the contested mosque is the closest place of worship they have. What’s quite bizarre about the PM’s statement is that he notes (3.19 to around 3.36) that the Dambulla Temple grounds have been declared a sacred area by the Town and Country Planning Ordinance. But as Namini Wijedasa notes in Lakbima News,

The government last week withdrew an amendment to the Town and Country Planning Ordinance that if passed would have given the Minister of Buddha Sasana and Religious Affairs vast powers over any private property in the country.

The Town and Country Planning (Amendment), a copy of which was obtained by LAKBIMAnEWS, consists of just eight clauses. Legal practitioners described the bill as ‘bizarre.’ It was presented to parliament close on the heels of another controversial law–the Revival of Underperforming and Underutilised Assets bill–under which the government acquired overnight the assets of 37 private sector companies.

Thus, the illegality of the mosque, going by the PM’s definition on TV, is very suspect. In fact, Deputy Minister of Women’s Affairs A.L.M. Hizbullah notes that the mosque is over 50 years old,

..If there is any dispute, it must be discussed and seen to. Surrounding the mosque and staging a protest only disturbs the harmony in this country that has been restored after a 30 year war… I have prayed at this mosque as early as 1985 when I was still in university. There have been no issues in the past. Only recently have there been problems when the number of people coming into the mosque on Fridays for Jummah prayers increased.

In the clip above, at around 4.47 the PM says that there is no provision for the erection of temples belonging to other religions within the land owned by Buddhist temples. Smiling, he wonders aloud why there was a sudden inflammation of disharmony around the mosque in Dambulla. Noting the government’s foremost responsibility to protect Buddhism, at around 5.36 the PM notes that the government’s responsibility is also to ensure that people of other religions can fairly observe their own religious practices. He ends by stressing the need for religious harmony and peaceful co-habitation, and flags the need to follow the tenets of each religion.

However, a longer clip of the segment first broadcast on TV suggests that some leading members of the Buddhist clergy in Dambulla are, clearly, not even remotely Buddhist in thought, expression and action.

There are members of the Sangha engaged in mob violence. There is a member of the Sangha who disrobes, jumps up and down and exposes himself, in public, against the mosque. Others break down the entrance of the mosque. A Chief Prelate from the Dambulla Temple suggests that the mob is a shramadaanaya, and that destroying the mosque is something that they should in fact be helped by the government.

At around 3.47 in this video, there is a particularly chilling exchange between one of the Chief Prelates of the Dambulla Temple and a Hindu resident of the area. The female resident, who is not once dis-respectful in her submissions to the Prelate, says that from when she was small, she had worshipped at a Kovil in the area. The Prelate’s immediate answer is whether she is referring to the 1800′s. In a menacing Sinhala idiom that loses a lot of its original violence in translation, the Chief Prelate threatens to either remove the Kovil, or have it removed along with the homes of the Hindu residents, noting that they are all there illegally. The Chief Prelate notes, through a Sinhala adage, that not only are the crows attempting to fly over their heads, they are now attempting to enter the nest as well – a clear reference to the Hindus and Muslims in the areas. The woman assures the Chief Prelate, in a very deferent expression, that there is nothing for him to fear about their worship. However, the Prelate’s answer is again menacing in Sinhala, noting that she can take her gods wherever they want to, but away from the sacred ground of the Temple.

The whole exchange and clip is sickening.

As Concerned Citizen in Spirtuality, Religion and Human Conflict avers,

In Sri Lanka, we can also see the negative impact of nationalizing Buddhism as a state religion and the obligation of the state to give it primacy of place over all other religions and foster its practice as required by the Constitution. The politicization of Buddhism favours the majority Sinhalese as it happens to be practiced only by Sinhalese in Sri Lanka and therefore marginalizes all other ethnic/religious minorities, particularly the largest minority group, the Tamils which has contributed to the ethnic conflict. Although the conflict culminated in a war resulting in the successful decimation of the extremist terrorist movement by the state, it has given rise to fanatical Buddhist supremacy which is intolerant of other creeds.