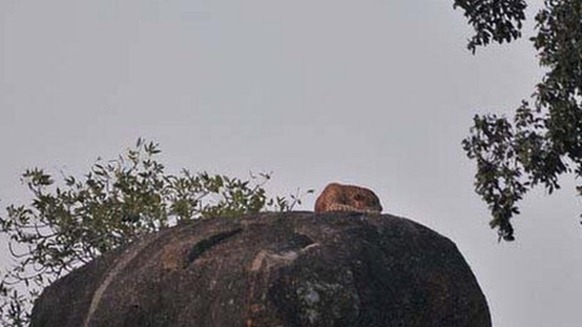 Sri Lanka’s Yala National Park inhabits a remote and wild corner of the south-east, but anarchic behaviour by tourists and drivers desperate to glimpse big game has created dangers for the wildlife there, as the BBC’s Charles Haviland experienced.

Yala is a place of magic, of rocky outcrops, big trees, ancient lakes and the rushing sound of the Indian Ocean never far off. It is a place of leopards, elephants, sloth bears, antelopes and a rich bird life of peacocks, hornbills and more.

But conservationists in Sri Lanka are warning that anarchic behaviour in some national parks is endangering the wildlife and the ecology of wilderness areas.

They say safari vehicles are flagrantly breaking speed limits and that marauding behaviour by drivers and tourists is grossly insensitive to fauna and flora.

This is especially the case in Yala in the south-east, the most famous habitat for leopards – the only big cat found on the island.

I experienced this during a recent trip there when we careered through the park at high speed, even though we told our veteran driver that we did not want to go fast and that we were by no means obsessed with seeing a leopard.

At first we were merely jolted, but within about 10 minutes, I had been flung to the hard metal bars running along the ceiling of the safari truck and sustained a serious head injury.

But there have been serious consequences for wildlife in the area. Four months ago a female leopard cub was killed in Yala by a hit-and-run driver.

The BBC has been told of jeep drivers going up to 100 kph (the nominal limit is 40 kph), bottles and dung being thrown into bushes to entice the animals out, and widespread littering.

It is also not uncommon to see jeep "jams" caused by the frenzied use of mobile phones to spread the word about a wildlife sighting. 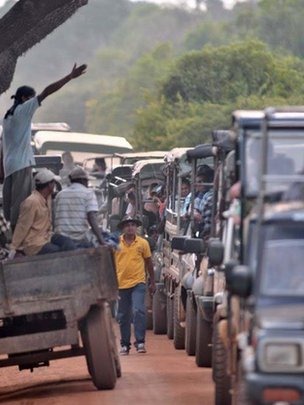 A contributor to travel and nature website lakdasun.org said he could not photograph a bird or rabbit without jeep-drivers barging in thinking he was looking at a leopard or revving their engines, overtaking and shouting obscenities.

The bad behaviour is all in aid of spotting the beautiful and elusive leopard – or drivers trying to show one to tourists hoping it will get them a fat tip.

Manori Gunawardena, a wildlife biologist living near Yala, says "leopard-centric marketing" is to blame. "It’s become a status thing – everyone wants to put the leopard shot on Facebook," she says.

Mithila Somasiri, who is a moderator on lakdasun.org, says tourists, especially Sri Lankan ones, make heavy demands on the drivers. Until quite recently there were few photographers and no mobile signals. Now, he says, the open part of Yala is "no longer a wildness experience".

As for the drivers themselves, one of their representatives admits there is chaos.

"There are lots of vehicles travelling in the park after hours," Tharindu Jayasinghe of the Independent Safari Jeep Drivers’ Association told the BBC.

"On some days there are 500-600 vehicles entering Yala. That’s terribly high and should be limited to about 150. There’s so much congestion that you can’t see the animals, so much noise that they disappear."

He admits that many enter the park without even a driving licence and would like to see a proper register of all the vehicles that enter.

Several wildlife enthusiasts said they had seen both drivers and self-driving visitors breaking the rules in Yala yet getting away with it because of their close relationship with politicians.

A senior government official candidly admitted to the BBC that rules were being disregarded.

"We must build a relationship with the drivers to keep them under control," said S Kalaiselvam of the Tourism Development Authority.

He said the authorities have started an awareness programme on better behaviour for drivers and government-employed wildlife trackers, who number only 40 in Yala. They have also distributed DVDs to tourists and drivers on how to conduct a safari.

The programme is in its infancy, however. Mr Kalaiselvam admits there are not the resources to monitor driver behaviour properly but says that where offending drivers are caught they should be suspended from the park.

Others favour special licences for jeep drivers or even switching off the mobile service at peak viewing times in the early morning and late afternoon.

Many say the emphasis should be bringing drivers on board in developing a new outlook.

"You can’t just follow phone calls," says Riaz Cader of Jetwing Eco Holidays, a Sri Lankan tour operator which has forbidden its chauffeur guides to use their mobiles.

"You must show the wildlife at leisure, follow the pugmarks, try and track them."

For some, this problem is symptomatic of broader issues. The wildlife biologist Manori Gunawardena says Sri Lanka’s stated target of attracting 2.5 million tourists a year by 2016 is unrealistic and unsustainable, and criticises big development works being carried out near Yala.

"The trajectory we are on does not take wilderness and wildlife into account," she says.

In the end, says Rukshan Jayewardene of The Leopard Trust, a local organisation, the wildlife stands to suffer unless there is change.

He recounted a recent incident in which a group of jeeps obstructed a leopard as she pursued a buffalo calf. As they were moving into her space, she gave up the hunt.

"Any time a leopard fails in a hunt, she comes a step closer to starvation," he said. "This happens quite a lot – the leopard will change its mind and direction. They feel a lot of frustration.

"Don’t be so over-zealous that you practically park on the leopard."