The Dambulla demonstration against a mosque that was being rehabilitated close to the Buddhist Maha Vihara is symptomatic of an anti-Muslim expression which has become more pronounced in recent months. The Dambulla incident, instigated by Sinhala Buddhist fundamentalism and backed by goons is more a statement of intolerance and insecurity than it being a statement of piety. Nor is this an isolated incident, where in cyber space such as facebook, YouTube and mass circulated emails in recent months have witnessed in Sri Lanka the surge of a calculated anti-Semitic wave.

As recent as the Sinhala and Hindu New Year, an email and a facebook share proclaimed that a popular chain store (owned by a Muslim shareholder) was intent on destroying the Sinhala race by offering its customers “drugged sweetmeats.” The facebook share further claimed that pregnant Sinhala women were given New Year food that contained an acid which resulted in abortions and miscarriages. The chain store was also condemned for distributing calendars in Arabic and Tamil lettering. This distribution, it was claimed, was not acceptable in a “Buddhist country.” The same store was claimed to use hidden cameras in their “fit on rooms” and Sinhala women were urged to be aware. The object of sharing this is without any doubt to bring the chain store and its Muslim ownership into public scorn; and by extension, to promote racist hatred. 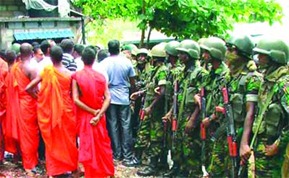 Comments made by other intolerant fundamentalists, who identify themselves as “Sinhala Buddhists” betray the myth of Sri Lanka being “every national’s country.” It makes Kumar Sangakkara’s now cliched optimism – “I am Sinhalese, I am Tamil, I am Muslim, etc.,” – a statement many kept repeating like a mantra in the aftermath of the former cricket captain’s ICC speech, look little more than arrogant jingoism. Following the “chain store email another post on facebook drew my attention – a post where four circumcised kids were shared, “thought bubbles” and all. The circumcised genitalia are clearly focused and thought bubbles (in Sinhala) run akin to the following: “Oh, why was I born a Muslim?”, “Where is Allah now?”, “Wait till I catch the ones who did this to me – I will sling their balls.” The sharer of this hideous post nags us to stand up against inhuman treatment meted out in the name of religion. In comments that follow, the sharer establishes (by also quoting a Western writer) that Islam is primitive and tribalistic and that it has to be eradicated. A fellow follower of the post assumes that Muslims are a threat to global security, and so forth. Here, too, the purpose of the facebook post is no humanitarian concern – for, if the object was such, the first step the poster would take is to view the diversity and the cultural difference in Islam with a human eye.

Cultural logic of many communities

Circumcision – which may be alien to the “Sinhalese culture” the sharer identifies with – tallies perfectly with the worldview and cultural logic of many other communities in the world; of which Muslims are but one group. What is overbearing in these “facebook fires” which the insecure Sinhalese fundamentalist organs in light stir to life is that they grossly trivialize and misinterpret culture. Their absence of empathy and unwillingness to tolerate cultural and religious difference is an “unlearnt lesson” in social harmonization.

The Dambulla incident, in the aftermath of all the above, comes as a “main course.” The Sinhala Buddhist argument is that Dambulla has been declared a “sacred site” and that a mosque shouldn’t be built in the vicinity of the Dambulla vihara. The counter-thrust is that the mosque in question has already been in existence. Minister Janaka Tennakoon – the political heavyweight of the region – was quoted by the web edition of a weekly as having said that the mosque has been in existence since his own infancy. However, as I write this, the Daily News reports that with the intervention of the Ministry of Buddha Sasana the mosque will be relocated to another site in Dambulla. Why should a declaration citing a city as a “sacred site” prevent a faith from its belief and rituals? The one way traffic of the demonstrators’ worldview does no justice to the moderation preached by the very religion they deem to be the vanguards of. The thug tactics and use of organized violence to deprive a “minority identity” of its right to worship is alarming and re-evoke disturbing memories of sustained intimidation of yet another marginalized identity group, through the 1950s-70s: the Tamils. How the Muslim/Islamic identity is expected to play second fiddle and pack up and relocate at the whim of demagoguery should indeed be very seriously considered.

As we know, the Euro-American block has today been injected to numbness with a mass phobia of the Muslim. The uncritical masses are stuffed with the now familiar paste of the “Muslim terrorist.” The very survival of the western capitalist block, today, is harnessed by this rabid dislocation and condemnation of the Muslim. Similar fears and insecurities have always been there in the Sri Lankan sphere, as well. The uncompromising Sinhala extremist has, through time, been aggressive towards numerous cultural facets of the Muslim. The Sinhala scorn of polygamy and the fear of Muslims “buying up” land that were traditionally of the Sinhalese has always been there. The birth rate among the Muslim communities (said to be higher than that of the other ethnic groups), too, has been referred to in debates of ultra Sinhala nationalism. However, for the past three decades the “Muslim debate,” perhaps, was misted to an extent by the tussle with the “more lethal enemy” (of Sinhalese fundamentalism): the Tamil. Now, with the Tamil (as they see it) smothered and “put in place,” the case of the Muslim gains precedence.

The Dambulla incident therefore should not be read as a random riot. The uncompromising vigour shown there – alongside the petty expressions of hatred via the internet etc., – has much disastrous potential if not addressed properly. One can pay scant notice to these as one did to the Swabhasha Act of 1956 or the riots of 1958. When the instigators of July 1983 torched the capital, they obviously did not foresee the carnage of the 26 years to follow.