Sri Lanka’s Justice Minister and the leader of the Sri Lanka Muslim Congress (SLMC) Rauff Hakeem, who has faced severe criticism in the recent days from the Tamil-speaking people in the island, the Sinhala opposition and the Tamil Muslims of Tamil Nadu, on Tuesday, admitted to Chinese news agency Xinhua that he was appealing to the Sri Lankan government “to prevent xenophobic forces from holding the government hostage.” But, Mr Hakeem was arguing against internationalizing the issue, which he maintained was an internal affair, according to the Xinhua. The ‘revelations’ by the SL Justice minister comes in the wake of more than 500 Tamil Muslims in Tamil Nadu besieged the Sri Lankan Deputy High Commission in Chennai after burning the effigy of SL President Mahinda Rajapaksa. 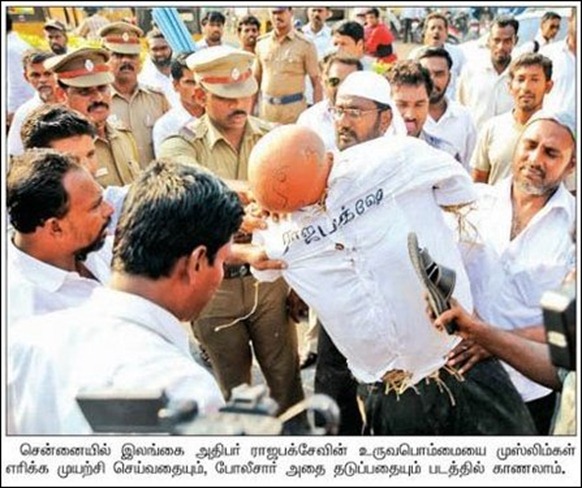 Muslims in Tamil Nadu burnt the effigy of SL President Mahinda Rajapaksa before getting arrested for their protest around the SL Deputy High Commission in Chennai on Monday [Photo courtesy: Thinath-thanthi] 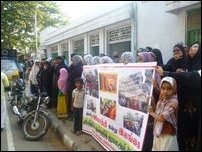 Widespread protests were also observed in the North and East in the country of Eezham Tamils by the Muslims.

Meanwhile, commenting on the situation, Tamil civil society circles in the island said that the Tamil-speaking people in the island, including the Muslims, should think of building an alternative secular State in the North and East, which will give them the ultimate protection.

While it is high-time that the Eezham Tamil political leadership should demonstrate the feasibility of such a secular State, the Muslims should realise that their hope lies only on such a secular State in the North and East and not with the chronically genocidal Colombo-centric Sinhala Buddhist State, the civil circles further said.

Two weeks ago, Buddhist monks went amok against a mosque in Dambulla claiming that they would demolish it unless the Muslims relocated the mosque from the area, which the monks claimed as a holy Buddhist site. Following the episode, the SL Prime Minister DM Jayaratne, who is also the minister of Buddhist affairs, instructed the Muslims to relocate the mosque, triggering anger among Muslims. Widespread protests were observed also in North and East of the island last week. 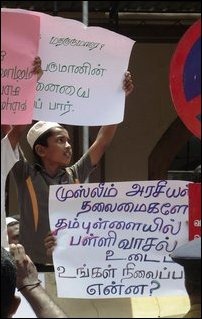 Following the protest in Tamil Nadu, Bengalore-based Indian journalist Sudha Ramachandran, writing in Asia Times, said, “[a]lthough Buddhism advocates peace and tolerance, the way it is practiced by a fringe – albeit one that is growing and extremely powerful – is rather violent, fanatical and far from accommodative.”

“The Sinhala-Buddhists’ self-perception has three components. The first is that they belong to the "Aryan Sinhala race" (as distinct from the Tamil Dravidians) and that Sri Lanka is their homeland; the second is that they are defenders of the Buddhist faith, the mission of protecting Buddhism having been entrusted to them by Buddha himself; and the third is that Sri Lanka is the home for the Sinhala language. This self-perception has created a virulent form of Sinhala-Buddhist supremacism.”

“Over the past 125 years or so, violence has been directed against the asinhala (un-Sinhala) and the abaudha (un-Buddhist). During colonial rule, Buddhist revivalists like Anagarika Dharmapala mobilized the masses not so much against the colonial regime but the Christian minority, their privileged position in society and political life, and their alleged misdeeds. In the early 20th century, it was the Muslims, who dominated business and trade, who came under fire from the Sinhalese-Buddhists,” the article by Sudha Ramachandran says.

The writer also cites Anagarika Dharmapala, the champion of Sinhala-Buddhism, on anti-Muslim violence by the Sinhala Buddhists:

In 1915, Dharmapala wrote: "The Muhammedans, an alien people … by Shylockian methods became prosperous like the Jews. The Sinhalese sons of the soil, whose ancestors for 2,358 years had shed rivers of blood to keep the country free from alien invaders are in the eyes of the British only vagabonds."

Inflammatory writing in publications Dharmapala’s Sinhala Bauddhaya and Piyadasa Sirisena’s Sinhala Jathiya fueled anti-Muslim sentiment in the island and is believed to have culminated in the anti-Muslim riots that year, the writer observes.

The role of Buddhists in Sri Lankan politics grew substantially post-Independence especially in the decade of the 1950s, when the country was swept by a wave of Buddhist resurgence in the wake of the 2500th death anniversary of the Buddha, Sudha Ramachandran further writes.