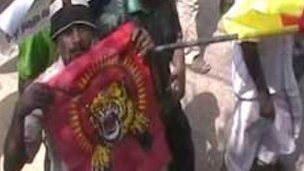 A row has broken out in Sri Lanka over the appearance of a flag associated with defeated Tamil Tiger militants at a May Day rally on Tuesday.

Government media and the opposition have clashed over the use of the banner, which is illegal in Sri Lanka.

It is thought to be one of the first times the flag has been seen in public since the defeat of the rebels in 2009.

The rally was held in Jaffna city by the opposition United National Party and the Tamil National Alliance (TNA).

The TNA was once seen as a proxy for Tamil Tiger separatists who were defeated three years ago.

But the party has now moderated its views considerably.

The government accused the opposition of giving comfort to separatism through this May Day rally.

And state television showed two rally participants carrying the banned flag of Tamil Eelam, the homeland that the Tigers fought for – a tiger and crossed bayonets on a red background.

Using terminology common in post-war Sri Lanka, it said the party was in "the clutches of a group of traitors".

But the opposition party’s general secretary has responded by asking why only state TV appeared to have noticed the flag-bearers.

He said those waving the Tamil Eelam flag had been planted there by the government television station which had thereby – as he put it – given support to terrorism.

Advocating separatism and using the Eelam flag are both illegal in the Sinhalese-dominated country. ]