This is in response to the comments to my previous post – Dambulla Mosque Attack: Is there a hidden hand? At the time of writing this, there were nearly 50 comments displaying a variety of stands taken by commentators. The very positive ones are the ones seeking introspection invoking to put the Buddhist house in order to commensurate with their civilised principles and precepts. This identifies the remorseful feelings of the silent majority of the Buddhist who vehemently deplore the mosque attack as an uncivilized act whilst taking a principled stand on the miscarriage of justice by Senior Political leaders at the highest echelons, law enforcement authorities and other wheeler dealers. This is a positive sign indicating that that the majority are not chauvinistic but inclusive. Their comments were also testifying that on the other side, the extremists too are hijacking the silent majority in their name. This is evidently clear in the modus operandi employed where a mob assembled of hooligans from elsewhere is coordinated to cause trouble in Dambulla. Clear evidence of premeditated trouble making that surprised the people of Dambulla. 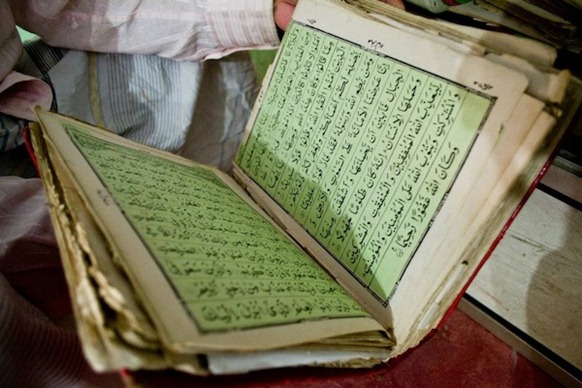 This Koran is tattered because Buddhist monks had been tearing the pages out of it. Asked if the monks had tried burning a Koran, I was told no – Caption and photograph by Navin Weeraratne

Peace loving people in this country should be alert to the machination of extremists who work in collusion with bankrupt politicians wishing to create religious, ethnic and other strife in society so that they can emerge as ethnic/religious saviours creating a new voter bank by taking advantage of an artificially created trouble.

Apart from these, there were also negative and irresponsible comments bordering on naivety and foolishness wishing to fish in troubled waters and sensitise the issue to cause more division in society by citing irrelevant and alien factors that has nothing to do with Dambulla. Drawing cues from these hints, the following negative trend settings are evident in the comments:

There were also comments hinting against my Sri Lankan posture and trying to paint me as a Rajapakse sycophant and ‘West’ basher. It is a citizen’s responsibility to protect the state whilst fighting within it to correct it to deliver the rights of its citizens. One’s allegiance should not go outside the state just because the state is wrong, as when such allegiance goes outside the state, there is propensity for one to turn anti-state and play into external factors inimical to a state.

Today Sri Lanka is a fractured society however unified it pretends to be. The reality is that as noted above, there are blatant violations by many actors (state and non state) and failure to uphold justice, and fair play. This has marginalized many both within and without and hence there are resentments, grudges and ill will against many such actors which makes the allegiance of some eccentric to state. This unwittingly makes the resentful citizens to be bought over by foreign players and use to espouse their goals. The state inaction to rein in law and order is implicitly undermining sovereignty by spawning dissenters and creating conducive conditions to turn to be perfidious.

Emergence of conflict in any society is natural and it is part and parcel of humanity. Therefore no conflict is unique except how such conflict is caused. In a civilised society too conflicts do emerge and the responsibility of the citizens and the state is to diffuse conflicts and reinstate justice, fair play and bring normalcy and cordiality to seek peace amongst its peoples.  Disquiet, conflict and violence does no good to either to the state or the citizens and therefore it is a right and a duty of responsibility to diffuse conflict and ease tensions in society.

When conflicts emerge the first victim is the truth. During such times even the paragons of virtue ally with falsehood as was seen in Dambulla. Therefore saner and responsible citizens do have a duty to mankind to speak the truth even if such truth is against their own interest. This is how civilised nations are built upon and not on the basis of ‘might is right’ and take advantage of opportunities. Any capitalization of the opportunity for short term and parochial gains would cause long term damages to society as have happened before. These challenges are opportunities to prove how civilized one is in the way in which truth, justice and fair play are administered in society and not to boast of history but to be correct now in flesh and blood.

Deplorably, some of the comments advocated ‘a pot calling the kettle black’ paradigm and was fuelling exacerbation of this conflict by citing irrelevantly. These clearly display their ignorance and  insidious intents.

The way this crisis in Dambulla is handled is a test to see how credibly the Sri Lankan state and its people depart from chauvinism to a more inclusive and just society.

Unfortunately, Sri Lankans are yet to come out of their ‘mind set created by others for them’ and discover their ‘own by pooling all the positives from all religions and communities’ to build this nation as a model for others as an astute and sustainable nation.

Dambulla Mosque Attack: A Litmus Test of a Nation in Transition from Chauvinism to Civility – Groundviews