(PTI) India appears not to be a happy place for women to become mothers, as it has been ranked 76th among 80 “less developed” countries, even below some of the poor African nations, according to a report released to mark the Mothers’ Day being celebrated across the world today.

The State of World’s Mothers 2012 report by international child rights NGO ‘Save the Children’ has seen India slipping one position down from the 75th spot of last year’s report.

According to the report, which looks at how good the life of a woman or a mother is around the globe, one out of every 140 women in India runs the risk of dying during childbirth, which is a much higher figure compared to neighbouring nations such as China and Sri Lanka. 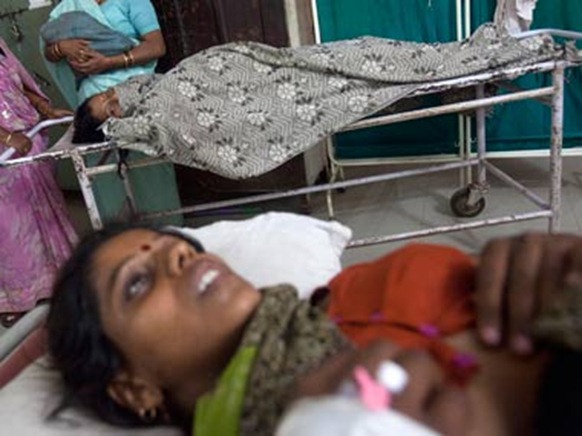 A woman who has just given birth looks at another woman in labour. Reuters

The study also found that less than half (49 per cent) of women in India use some form of modern contraceptives and only 53 per cent of births are attended by skilled health workers, which is the fifth lowest in all of Tier II countries.

With 43 per cent of underweight children in under-five age group, India has the highest rate of child malnutrition of all Tier II countries and the second highest rate in the world (tied with Yemen) after Timor-Leste.

“Even though India has made efforts to improve maternal health by encouraging institutional deliveries and taking other measures, the benefits have not yet appeared to bring about a shift,” CEO of Save the Children India, Thomas Chandy said.

“This report shows that even now almost half of our births take place in the absence of skilled health personnel. This has a direct bearing on mothers’ health and, due to the strong dependence of children on mothers, also on children’s health,” he said.

As far as the educational status of women is concerned, the average years of formal schooling for women in India is just 10 years, lower than China and Sri Lanka (12 years).

India’s poor performance in providing education to women also places it among the bottom 10 in Tier II countries, Chandy said.

In Asia, Bangladesh and Nepal are rated in the report as “good” for their practices related to infant and toddler feeding; Afghanistan and India are rated as “fair”; Pakistan and Vietnam as “poor”.

Shireen Vakil Miller, Director for Policy and Advocacy at Save the Children, said though exclusive breastfeeding is a critical source of nutrition for a baby, only 46 per cent of newborns in India are exclusively breastfed till six months.

“Globally, exclusive breastfeeding can save one million lives in a year. We urge the government of India to take the findings into account and radically transform the health service delivery system as well as improve education and nutritional status of children in India,” Miller noted.

In South Asia, Sri Lanka, which is ranked 42nd among the less developed countries, remains exemplary with its excellent indicators on women’s and children’s health.

“India should also learn from the examples of countries like Sri Lanka that have invested so well in their public health system,” Miller said. “China, India’s economic rival, is far ahead of India at rank 14, which is an improvement from its 18th rank last year,” she added.