At the height of a show of ‘victor’s supremacy’ in the country of Eezham Tamils, a 17-year-old Tamil boy, S. Krishnakumar of Kumaarasaami-puram village in Visuvamadu in Mullaith-theevu district, was shot and fatally injured by the occupying Sinhala military, for his cattle damaging the ‘Vesak’ decorations commemorating 2600 years of Buddha at an SL military camp. When the injured boy was taken to the hospital, passing through the prevailing hurdles in the district, the occupying SL military took charge of the boy to be sent to Anuradhapura hospital by helicopter, but after warning his family members that the matter should not be revealed to anyone. The boy was herding his cattle on Monday evening when he was shot. 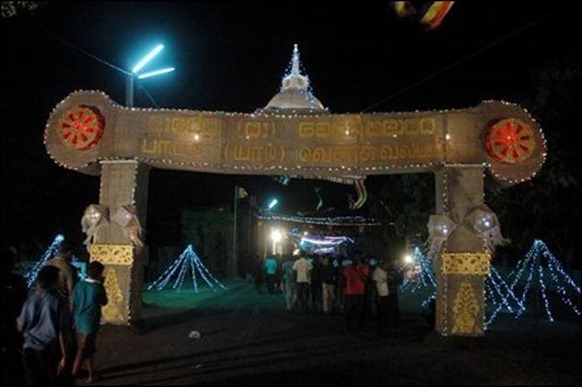 A Vesak arch in Jaffna written in corrupt Tamil

2600 years of Buddha, according to Sinhala-Buddhist reckonings that fell on the full-moon day on Saturday, became an occasion for a show of genocidal legitimacy by the Sinhala military occupying the country of Eezham Tamils.

Analogous to the 10,000 Sinhalese brought by the UNP leader Ranil Wickramasinghe, who chose to celebrate the May Day in occupied Jaffna, several thousands of Sinhala Buddhists were sent to the North this time, as ‘pilgrims’ to observe 2600 years of Buddha.

All the Sinhala military camps in the country of Eezham Tamils were grandly decorated for the occasion to present a psychological impact that the whole island belongs to the Sinhala Buddhists.

The Jaffna Public Library, which was once burnt down by the Colombo government, became a centre for the colonial-military dissemination of Sinhala-Buddhist piety to Eezham Tamils.

The virtual invasion of thousands of Sinhala ‘pilgrims’ to Vanni and Jaffna peninsula caused severe inconveniences to the local people, who preferred to remain indoors.

The Sinhala government agent of Mannaar district chose that day to issue an order to build a Buddhist temple in the precincts of a major Saiva-centre at Thirukkeatheesvaram in the Mannaar district.