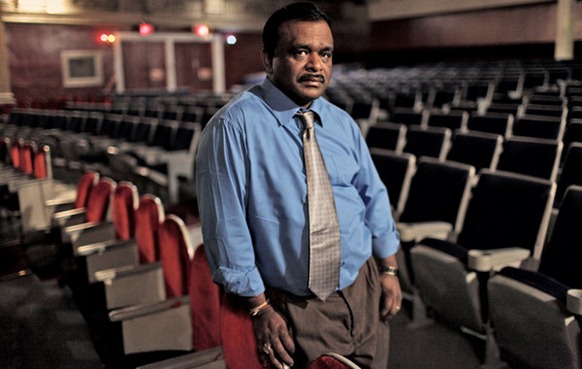 “THIS is my exercise,” said Somasundaram Gunasegaram as he scrambled nimbly up an iron ladder to the cramped projection booth in the Jackson Heights Cinema, a tired old movie house on 82nd Street just off Roosevelt Avenue in Queens.

Entering the booth was like stepping back in time. Strips of film spooled off from large, circular platters and looped through dozens of pulleys and slots, up and down and around. The film draped across the ceiling and down into hulking, old projectors that shot colorful action through little windows into the cinema’s three (nearly empty) theaters.

Mr. Gunasegaram (pronounced gun-a-SAH-ga-ram) stood at one projector — the size of a refrigerator and a half-century old — and inspected the film: “The Avengers,” in English with Spanish subtitles.

O.K., people: This is supposed to be a story about a Bollywood cinema impresario. What’s with the American movie? There isn’t even an Indian title listed on the marquee.

Yes, Mr. Gunasegaram, 52, known to his friends as Sagar, was once a prominent cinema owner among South Asian immigrants in New York City. After immigrating to New York from Sri Lanka in 1979, he gained a following by renting neglected theaters all over the New York area and showing Indian films to give immigrants a cinematic taste of home.

“People used to wait for two hours to get into my movies,” he said.

But things have changed, thanks to the proliferation of bootleg movies on DVD and the Web, as well as the increase in the number of art-film theaters and multiplexes that show Bollywood films.

“When I started showing movies in New York, you might have five copies of a popular Bollywood film in all of America,” said Mr. Gunasegaram, who lives in South Ozone Park, Queens. “Now, you have 300 copies in this country. There’s much more competition, but this is the only business I know.”

Several years ago, he was showing Indian films at the Mayfair theater in West New York, N.J., when a large multiplex opened nearby, undercutting him. He closed the Mayfair and signed a lease for the Jackson Heights theater, which had been shuttered for more than a year and had a slightly sagging marquee.

The 1924 theater sits between a hair salon and a produce market, with a sprawling billiards hall above the theater lobby. It is in a bustling Latino neighborhood, but only a few blocks away from Little India, the hub of South Asian immigrants in New York, and Mr. Gunasegaram’s main plan was to run Indian films with English subtitles and offer Indian snacks.

He put a coat of battleship-gray paint over the sloping concrete floors and rolled new carpets down the three aisles. He spent $30,000 on a new sound system and put a dozen video and arcade games in the lobby.

Tickets are sold from the snack bar, between the hot-dog buns and the bottled water. Adult tickets are $9, with daily $6 specials.

Even on a shoestring budget — his wife, Srimathy, and his son Siva, 19, help him run the operation — he is struggling to meet the $25,000 monthly rent. He is already $100,000 behind, but his landlord, an Indian immigrant who is also a Bollywood fan, has allowed him to stay open, he said.

Although Mr. Gunasegaram has kept Indian and other ethnic films on special showings, he stopped booking Bollywood films regularly a year ago and turned to first-run Hollywood films.

“With Spanish subtitles, or else no one will come,” he said, standing in the projection booth and gazing at the dozens of boxes wrapped in burlap in the corner, old Bollywood films. Business has improved, but just slightly. He picked up a metal case holding the second reel of a film starring the Indian actor Suriya.

He had new films in the lobby — “Dark Shadows” and two other American movies — to bring up to the projection booth. He descended the ladder and walked into the huge main theater, with 550 seats, whose circular ceiling molding, more than three stories above, is intact, as are the thick columns and two chandeliers flanking the screen. The balcony was converted years ago into two smaller theaters.

Mr. Gunasegaram said he was bringing in Siva’s Indian dance troupe to do live performances in the theater — a perfect plan to save it, if life were a Bollywood film. But if that does not work, he said, he already has his eye on another theater in New Jersey, for when his lease expires in two years. Maybe children’s movies could save the theater, he said. They attract families from the neighborhood.