Delivering the keynote address at the Tamil studies Conference in Toronto on Friday, Veteran Tamil Studies Professor, Noburu Karashima, who has been working on Tamil inscriptions for many decades, emphasized the importance of statistical analysis of data to come out with valuable revelations of Tamil History. Presenting a statistical analysis of Chola inscriptions, he demonstrated how hitherto unknown information and perspective could be obtained on village community and challenges to caste system among medieval Tamils. Interestingly, a recent book published by Oxford this year, “South India Under the Cholas,” authored by Professor Y. Subbarayalu, throwing new light on history based on inscriptions was also focussing on statistics and concordance. Karashima, now 79, and Subbarayalu were working together closely for nearly four decades. 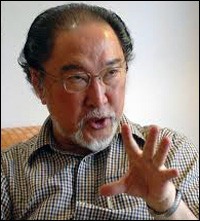 Of the 58,800, recorded inscriptions in Indian languages, 44,000 are in South Indian Dravidian languages, and 28,000 are in Tamil alone, Karashima said in pointing out how there is ample scope in Tamil for a statistical study to bring in reliable information and perspective.

Karashima was steadily working on statistical data of Tamil inscriptions ever since his publication ”A Concordance of Names in Chola Inscriptions,” compiled along with Subbarayalu and Matsui was published in 1978.

In his paper on Friday, Karashima statistically bringing out information on different quarters of functions existed within villages of a region at a particular time, pointed out how they had been interdependent, contrary to colonial Orientalist historiography projecting Indian villages as self-sufficient republics of their own, and thus theorising that the Orient was stagnating.

PDF: Noboru Karashima: The Past as known from Tamil Inscriptions

Through his analysis, Karashima has also shown how there were challenges against the Brahmanical order of caste hierarchy in the Tamil country.

“Behind the formation of iḍaṅgai/ valaṅgai [Idang-kai/ Valang-kai] groups in the twelfth and thirteenth centuries, we may perceive the challenging idea, that the people conceived of, namely, changing the caste system which was made hierarchically based on the Brahmanical ideology, by bifurcating the jati groups horizontally into iḍaṅgai [Idang-kai] (left hand) and valaṅgai [Valang-kai] (right hand),” he argued in his paper.

There seems to have been an aspiration among the people who founded iḍaṅgai/ valaṅgai [Idang-kai/ Valang-kai] organizations towards an egalitarian society and this is something new to South Indian medieval society, he further said.

Idang-kai and Valang-kai were umbrella social organisations that gave new horizontal identity to various communities of vertical hierarchy in the Brahmanical order.

In his address Karashima insisted on scholars reading full texts of the inscriptions in their original language and understand them in the context of the times with the help of corpuses and concordance, to make comprehensive use of them, rather than depending on single inscriptions and abstracts in English.

Noboru Karashima born in 1933 is Professor Emeritus of Tokyo University and is currently Professor of Indian Studies at Taisho University. He was the President of the Epigraphical Society of India in 1985, and was the President of the International Association of Tamil Research in 1989. He organized the VIII session of the prestigious, International Conference of Tamil Studies, in 1995, at Thanjavur.