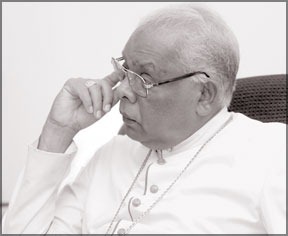 Mannar Bishop Rev. Rayappu Joseph has been questioned by the police on his statement to the Lessons Learnt and Reconciliation Commission (LLRC) regarding disappearances.

The Bishop was among several people, including government officials, who had given statements to the LLRC during its public sittings. Bishop Joseph said that police officers had visited his office in Mannar last Tuesday after seeking a prior appointment.

They had sought clarification on to how he had arrived at the figure of disappeared people, which he had placed at around 146,000 in a submission to the LLRC.

When asked the reasons for their visit, the officers had said it was possible their superiors were concerned as to whether the Bishop had been provided these figures through external organizations such as INGOs.

However, Bishop Joseph said he had arrived at the number by examining reports by various Government Agents, particularly those of Mullaitivu and Kilinochchi.

He had also drawn information from the United Nations Office for the Coordination of Humanitarian Affairs (UNOCHA).

The Bishop of Anuradhapura Norbert Andradi had also been present when the meeting took place, he added.  The LLRC meanwhile said that there was no witness protection for people who came forward to give statements during the Commission hearings.

When The Sunday Leader contacted Inspector General of Police, N. K. Illangkoon, he stated that he was unaware that the Bishop of Mannar had been questioned by the police and asked the newspaper to contact the police spokesman regarding this.

The police spokesman SP Ajith Rohana confirmed that officers from the Criminal Investigations Department had indeed visited the Bishop and questioned him.