What does reconciliation signify in the Sri Lankan context?

In many post-conflict contexts the idea of reconciliation dominates public discussion. This is no different in Sri Lanka. But what exactly is meant by reconciliation? As Susan Dwyer (1999) points out there has been a “global frenzy” on this topic in the post-Apartheid era with the South African Truth and Reconciliation Commission often held up as an exemplary model. Much of this discussion, though, lacks analytical clarity. This is a brief attempt to explore one challenge posed to the notion of reconciliation in Sri Lanka: where or how can an inclusive Sri Lankan imaginary be located? I approach this issue through the area of my disciplinary training, literature, and attempt to reflect on how literary representations in general have struggled to articulate an inclusive conception of Sri Lankaness. A pervasive historical consciousness and the dominance of realism as a genre of writing, I argue, emerge as two inter-related phenomenon that are intimately connected to this problem.

To some commentators the post-2009 era presents an opportunity to break with the past. This appears to be largely the official government desire as well. In his address to the nation, following the defeat of the LTTE, the Executive President of country made the provocative and controversial statement that minorities no longer exist in Sri Lanka. Yet post-war events in the country clearly suggest otherwise. The majoritarian imagination of the Sinhala polity along with the Tamil minority’s self-perception as a historically wronged community and Tamil nationalism’s lingering desire for separation as evidenced by the activities of some sections of the Tamil diaspora and local Tamil politicians are all part of Sri Lanka’s post-war reality. There are signs of further ethno-religious schisms as evidenced by the recent Dambulla mosque incident.

While reconciliation might be seen as a future process that builds trust and tolerance between divided communities, the term also carries strong implications of a return or restoration. However, Sri Lanka’s past, both pre- and post-independence, provides little evidence of an inclusive conception of nationhood. Other than the elite English-speaking Ceylonese identity that flourished briefly in the early twentieth century, and found political expression in the Ceylon National Congress, Sri Lankan political culture and more importantly its national cultural imaginary has always been marked by, for want of a better word, a communal and religious dynamic.

This is not to homogenize Sri Lankan history and suggest that ethno-religious divisiveness has been the norm. Indeed, it is possible to argue that as recently as pre-1956 there were better relations between communities and ethno-nationalist consciousness was not a dominant concern. For instance, in the contest for the ‘educated-Ceylonese’ seat in the 1911 Legislative Council elections the goigama Sinhalese backed a Tamil vellala caste candidate over a karava Sinhala candidate—caste concerns superseded ethnic/racial considerations. Nonetheless a space where Sri Lankaness could be evoked and experienced, as in ecumenical Gandhian nationalism in India, has been largely absent in Sri Lanka. The ‘imagined community’ of Sri Lanka, to invoke Benedict Anderson (1983), has never been fully realized.

Literature and the attempt to imagine an inclusive nation 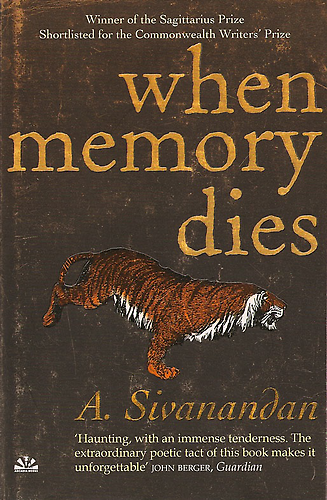 Literary writing is often a space where the idealistic and imaginative is explored. In a number of post-1983 English language novels, writers have tried to counter contemporary ethno-nationalist polarization in the island by attempting to imagine moments of connection and collective identity. I chose here two novels: Ambalavaner Sivanandan’s iconic When Memory Dies (1997) and Yasmine Gooneratne’s The Sweet and Simple Kind (2006). Broadly similar in structure both novels look at the past and the familial domain to imagine spaces of inclusivity. Yet both texts also represent a failure of the imagination because they replicate the trajectory of the familiar narrative of Sri Lanka’s inexorable slide into ethno-nationalist conflict—the imaginative here is subsumed by the historical and the ‘real’.[1]

In When Memory Dies, a text that is unique and exemplary in the way it attempts to imagine an inclusive Sri Lankan identity, Sivanandan creatively exploits the early labor movement in colonial Ceylon to suggest a subaltern multi-cultural anti-colonial movement. The text also features a number of instances where individuals transcend ethno-religious boundaries. The young Vijay born to Sinhala parents but socialized in both Tamil and Sinhala cultures, because his Sinhala father dies before his birth and his mother subsequently marries a Tamil man, is the most iconic example of the text’s attempt to question the naturalization of ethnic identity. But like his parents inter-ethnic marriage, Vijay’s life ends in tragedy. While his mother Lali is killed by a Sinhala mob during the 1958 anti-Tamil riots Vijay who tries to act as an emissary of reconciliation between the South and North at the end of the book is executed by his own Tamil cousin, a rising figure in the northern Tamil militant movement.

Unlike When Memory Dies the Sweet and Simple Kind looks at the issue of a collective Sri Lankan identity from an elite English-speaking perspective. Gooneratne’s text suggests that it was the historic responsibility of the English-speaking elite to disseminate liberal values to society at large. Centering on the powerful Wijesinghes and their manorial residence Lucas Falls—easily identifiable as a pastiche of the Bandaranaike and Ratwatte families—the story is one of how the once liberal and British educated Wijesinghe patriarch and most of his clan succumb to expedient ethno-nationalist politics in search of political power. While the text’s historical vision and understanding of Sri Lankan history is far more limited than When Memory Dies, the narrative trajectory is similar—from the promise of an inclusive and tolerant society to one riven by ethno-nationalist divisions.

Both texts try to imagine alternatives to Sri Lanka’s current predicament by looking at the past, but the imagination falters when confronted by the ‘reality’ of the island’s present. I would argue that this is at least in part due to the realist genre. Realism is largely compelled to remain faithful to the historical record and reproduce things as they are. While a certain degree of creative license may be available the imagination can be stifled by the realist form. Its greatest strength is the very ability to generate what Rolan Barthes has called the “illusion of reality” and create believable life-worlds and this is also why the realist novel has played a central social role, especially in imagining the nation. But it is this same compulsion to be ‘real’ that limits and constrains the imagination.

If one were to contrast this with the career of the African novel in English, for instance, an immediate difference is apparent. The writing of Ngũgĩ wa Thiong’o or Chinual Achebe, for example in its early phase was both realist and nationalist. Both writers saw the novel as a central literary artifact in in the process of decolonization. But as African post-colonial nationalism floundered Ngugi in particular abandoned the realist genre. This is what, American philosopher of Ghanaian origin, Kwame Appiah calls the post-realist and post-nativist turn in African literature.[2] If the earlier realist literary tradition contributed to nativist thinking and the naturalization of ethno-nationalist identities, post-realism helps the imagining of alternatives. But at the same time Ngũgĩ and many other post-realist African novelists are not post-national. While they may reject the conception of nation and nationalism as inherited from the colonial experience they try to imagine it in radically different ways.

Authenticity and the realist novel

Sri Lankan Sinhala writing has also been largely dominated by the realist mode. It may come as no surprise, therefore, that Gunadasa Amarasekara, arguably one of the most important and influential contemporary novelists, is a staunch defender of realism. For Amarasekara realism equates to authenticity. In Abudassa Yugayak, first published in 1976 and later updated in 1996, Amarasekara argues that the decline the Sinhala novel, following the work of Martin Wickremasinghe, is accompanied by social decline—the Sinhala novel he argues has failed in articulating a social vision that will help the Sinhalese rediscover their authenticity and become truly decolonized. Amarasekara repeats this theme across a number of his fictional texts as well as socio-political tracts. Exploiting outdated, but unfortunately widely prevalent positivist views on Sri Lankan history Amarasekara defines this authenticity as a form of transcendent Sinhala consciousness and a righteous form of governance associated with Buddhism which has survived for millennia from pre- to post-colonial times. The work of the novelist, as Amarasekara sees it, is to explore this notion of authenticity and how it can be realized in a modern social context.

Given the close association of the novel with the nation and the nationalist imagination it is unsurprising that a nationalist thinker like Amarasekara feels the need to defend it and uses it as a site to promote nativist thinking. What this evinces though is an inability to think beyond the legacies of certain modes of colonial thinking. Just as the form of the Sri Lankan nation state is the product of colonial-modernity so it seems is the literary imagination that accompanies it. The very ethnic identities that we take for granted today were crystalized in a complex negotiation between local actors and colonial forms of knowledge, institutional practices and practices of political representation. Imagining alternatives means the ability to be able to both critically reflect on these legacies but also to think beyond and outside them. From the perspective of literature perhaps we need a post-realist turn in Sri Lanka.[3]

To return to where I began if reconciliation means some kind of return, Sri Lanka needs to critically engage with the notion how an inclusive Sri Lankan identity can be generated. This necessarily means an encounter with the past—else we may have utopian declarations such as the one that minorities no longer exist. The past might not be the best inspiration for reconciliation in Sri Lanka but it does provide a template for how the nation should not be imagined. While Sinhala nationalism’s primary failure was and continues to be its unaccomodative majoritarianism, Tamil nationalism was equally majoritarian—it imagined and fought for a mono-ethnic Tamil nation. An ethical alternative to such majoritarianism needs to emerge. While critically engaging with the past we cannot be defined by it—only then might we be freed from the ‘tyranny of reality’.

[1] My reading of When Memory Dies here is indebted to Qadri Ismail’s incisive reading of the text in Abiding by Sri Lanka (2005).

[2] Post-realism is distinct from post-modernism. Post-realism does not necessarily entail a reaction or opposition to modernism. Post-nativist implies a critique of cultural essentialism. Nationalist thinking is often nativist as in Hindutva in India or Jathika Chinatanaya in Sri Lanka.

[3] Liyanage Amarakeethi in a recent article has suggested that such a post-realist turn is becoming visible in Sinhala writing.

This essay is part of a series on the theme of post war reconciliation, justice and development initiated by the International Center for Ethnic Studies, (ICES). Colombo. The views expressed are the author’s own and does not necessarily represent the views of the ICES.