That day, from the Northeastern coastal town, Roxy took a boat out of Tamil Tiger-held territory. His parents, eager to see him leave, had paid for the trip — it was expensive to smuggle out able-bodied youngsters past the LTTE, which was on a constant recruitment drive for fighters.

Once earlier, Roxy had been taken away by the LTTE, and as the fighting escalated in northern Sri Lanka, his family wanted to make sure he would not be around if the Tigers came calling once again. 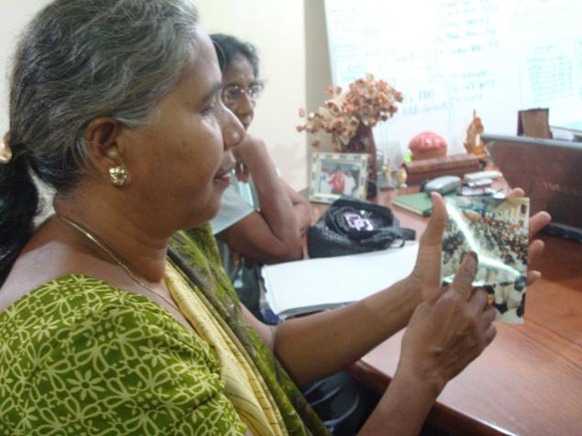 The Hindu Saroja Devi from Uppumaveli, Mullativu, pointing out her son Leon Roxy from a picture taken by me (The Hindu’s correspondent in Sri Lanka) in September 2011 on Tuesday in Colombo. Photo : R.K. Radhakrishnan

Two days later, on July 9, 2008, the ‘middleman’ Madhuran, who took Roxy along with a few other boys, informed their parents that he had dropped them off on the other side of Sri Lanka, in Mannar on the north-western coast.

The same day, the whole group surrendered to the Navy, as planned. Surrendering to the security forces was common practice by youth seeking to escape the Tigers. Madhuran’s news about the successful crossover was the last time Saroja Devi heard about her son.

Life had already turned into a nightmare for her — the fighting between the Sri Lankan government forces and the LTTE had intensified, and her family of five was forced to move from one place to another. They finally ended up at the Ramanathan camp in Mullaitivu.

After the war, when officials began registering missing persons, she was one of the first to do so. “I would have registered the name of my son at least a 100 times,” she told The Hindu in Colombo, where she has been camping for the last 10 days in a bid to trace her son.

Once the families were allowed to go back to their homes, Saroja Devi and her family returned. She registered her son’s name yet again, with M.A. Jeyaratnam, Grama Officer, Uppumaveli, in Mullaitivu, and later with the police. She also went to all the local offices of the Army, the police, politicians and government officials in a bid to get any information about her son.

Hope came in end February 2012, in the form of a photograph in a Tamil newspaper. The Hindu’s photograph that appeared in print on October 1, 2011, of a function at Temple Trees where Sri Lankan President Mahinda Rajapaksa handed over the former LTTE combatants to their families, was published in the website of Transcurrents from where a local Tamil weekly, SudarOli picked it up.

“I can spot my son in that picture. I can also spot two of his friends,” said Saroja Devi. After that I have been walking around with this photo,” she said and thanked The Hindu for letting her know that her son was alive.

Saroja Devi is matter-of-fact when she speaks of her missing son; no tears, no display of emotions. Roxy, born in 1985, wanted to go abroad for studies after he completed his schooling. She says she first lost him to the LTTE, in 2007.

“He ran away from them and came back home. Then we hid him and my other children in the forests,” she said. As punishment, the LTTE took her and her husband Kerbert Marino, and made them live in a camp with minimum facilities. When the children did not come in search of them even after 10 days, the LTTE released them. “They told me,” she said, “a son who does not look after his mother, will not look after our motherland. (Thayai paarkka varaadavargal thainaattai paarthu kola maatargal.)”

After that fortunate escape, and two years later, his successful crossover to government territory as reported by Madhuran, Saroja Devi did not imagine he would go missing. “How can I lose my son twice?”

An e-mail on Roxy’s case, followed by a text message, to Brig. Dharshana Hettiarachchi, Commissioner General of Rehabilitation, on Tuesday did not elicit a response.

A day earlier, this correspondent had met Brig. Hettiarachchi at Water’s Edge Hotel – the venue for the release of the Book, ‘Gota’s War’ – and asked him about the allegations that have received some media coverage that at least three ex-combatants had not been reunited with their families. The specific details of Roxy’s case were not available with The Hindu then.

Asked if all the families were present at the ceremony at the end-September 2011 function, he said: “Correct. They can’t say [otherwise]…It is a baseless claim because we handed over to relatives. They can’t say that whereabouts are not known.”

Right now, he said, the department is preparing a few hundred more ex-combatants for rehabilitation. They will undergo various programmes for a year. “So far more than 11,500 ex-combatants have been released. There are about 700 left with us. All of them have been sent to us on Court orders,” the Brigadier said.

Saroja Devi said neither she nor her family was invited to the Temple Trees function where her son was photographed during the re-integration ceremony.

Democratic People’s Front Leader Mano Ganesan has taken up the case of Roxy and two of his friends, Savarimutththu Anton Hudson Lorantine and Murugesu Muruganandan.

“These youth, according to the parents, were forcefully abducted by the LTTE and they managed to escape and surrendered to the security forces in Mannar in year 2008. The parents have not seen them since then…Contrary to claims of the government, family members of the three youths say that they were not invited to the ceremony nor their detainee sons were handed over to them,” he said.

He has written to the Minister of Rehabilitation and Prison Reforms Chandrasiri Gajadeera, asking the government to trace the missing youth. U.S. Ambassador to Sri Lanka Patricia A. Butenis, Indian High Commissioner to Sri Lanka Ashok K Kantha and the former Australian High Commissioner to Sri Lanka, Kathy Klugman, were among the huge posse of diplomatic corps that attended the high-profile ceremony at Temple Trees. They were on stage handing out skills certificates to some of the youngsters.