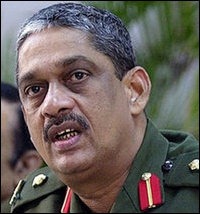 Sri Lanka’s former military commander General Sarath Fonseka, who led the Sinhala military in the ‘international community’ –abetted genocidal war against the Eezham Tamils, has been released by the Mahinda Rajapaksa regime in Colombo on Monday. While the so-called international community reducing the genocide into mere war crimes, now verbally demands investigation into the ‘war crimes’, the general who led the war and later imprisoned because Rajapaksa found him a challenge, was considered by the USA as a ‘political prisoner.’ His release on that count was always demanded by the USA, the main architect of the war. Fonseka during the war declared that Sri Lanka belongs to the Sinhalese. He also ridiculed the politicians of Tamil Nadu protesting the war as ‘jokers’.

According to sections of the so-called international media that did nothing during the genocide, the release of the commander of the crimes-accused war would ‘improve’ Sri Lanka’s international image and would prompt more foreign inflows. They cited ‘investors’ welcoming the release.

Jubilant Sinhala masses welcoming his release as a release of the ‘war hero’ while Tamils remember the third anniversary of the genocide with bereavement, is a message clearly addressed to India and the USA that unrealistically uphold unity of state in the island, Tamil political observers said.

It is also a message for those who naively thing that the so-called IC could achieve war crimes investigation in the island. Delivery of justice is more important than investigation and war crimes justice in the case of the island is nothing but secession, the political observers further said.

In October last year, writing an article “Scapegoating of a General” and defending Maj. Gen. Shavendra Silva, Sri Lanka’s war crimes accused representative at the UN, Jehan Perera, a Sinhala lawyer heading a Colombo-based outfit National Peace Council of Sri Lanka came out with a ‘universal’ argument that war crimes are justifiable “to preserve order in the world.”

“The harsh choices that sometimes have to be made by government leaders in the fight to preserve order in the world is why Sri Lanka’s own war has much to offer the world in terms of lessons learnt,” said Jehan Perera, whose outfit was getting Norwegian foreign ministry funds for three consecutive years between 2009-2011.