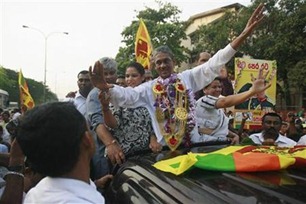 He was pardoned by the president and released from jail, but Sri Lankan former army chief Sarath Fonseka had nothing but scorn for the government on his first day of freedom and vowed to fight for its downfall.

The ex-general said it could take 5 to 10 years to change the political culture of the island nation but he was determined to join forces with opposition parties even if the terms of his release prevented him from standing for office.

"I might not be able to contest and vote, but still I can do politics," Fonseka, 61, told Reuters on Tuesday in a telephone interview from his home outside the capital, Colombo.

"I can educate the people, I can talk to people and have meetings," he said. "And I can do anything else to ensure that this government is thrown away and try to bring another government that will look after the welfare of the people."

Hailed by many as a hero for helping end Sri Lanka’s 25-year civil war against Tamil Tiger rebels, the four-star general fell out with the government in 2009 before a failed presidential bid against Mahinda Rajapaksa, his one-time friend.

He was arrested two weeks after the election, sentenced to 5-1/2 years in jail for various crimes – among them corruption and engaging in politics while in uniform – and stripped of all his rank and retirement perks.

Fonseka allies said the conditions of his release on Monday, which came after pressure from Western nations, do not allow him to stand in electoral politics.

Analysts believe that external demands were only part of the explanation for his liberation. They see it as a tactical move by Rajapaksa to deflect public attention from economic problems and throw an already divided opposition into further disarray.

"IT’S NOT GOING TO BE EASY"

Fonseka leads the Democratic National Alliance, which has seven seats in a 225-member legislature. Some lawmakers from other opposition parties have said they are ready to back him due to his popularity and outspoken criticism against Rajapaksa.

Fonseka said he had no burning ambition to become president himself, and it did not matter whether he joined the main opposition party or any other as long as all opponents of the government united to convince voters that change must come.

"It is not going to be that easy, and it’s not short and sweet," he said. "You have to educate the people about what is right, what is wrong, what the country needs and what has happened to them."

Fonseka and the president’s brother, Defence Secretary Gotabaya Rajapaksa, led the army to victory in the final stages of Sri Lanka’s war, but they fell out after it ended. The general complained that he had been sidelined by the president, who grew concerned that Fonseka was plotting a coup.

A U.S-backed resolution at the U.N. Human Rights Council in March urged Sri Lanka to investigate alleged abuses during the last months of the war.

Rights groups say both Fonseka and the president are implicated in shooting fighters as they sought to surrender.

It is unlikely that the government sees Fonseka as a threat given that he trailed Rajapaksa by 17 points in the 2010 election and the next poll is not due until 2016.

Fonseka was also in poor health during his last days in prison, though he said this was due to being confined in a dusty environment and he was now confident he would recover.

He said he had been a victim of injustice but had lived through 2-1/2 years in jail with "a very firm spirit" and his release was a wrong put right.