Remembering Mu’l’livaaykkaal is not wailing for a tragedy. It is remembering the highest achievement of modern Tamil history, when Tamils decisively said no to an entire international community abetting a genocidal state. Mu’l’livaaykkaal is not an end of a journey. It calls for our massive re-commitment of collective political aspirations more than ever, as the Sri Lankan state has intensified its second phase of genocide, again aided by the international community, said Dr. Jude Lal Fernando, addressing Mu’l’livaaykkaal rememberance event in Dublin, Ireland, on Friday. Dr. Fernando, a Sinhalese currently lecturing and doing post-doctoral research in peace studies in Ireland was one of the main co-ordinators of the Dublin Permanent People’s Tribunal on Sri Lanka held in January 2010. 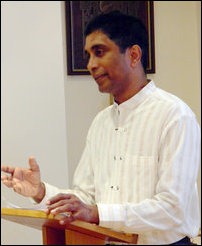 There is no support for a new separate state in Sri Lanka or for the models of applying self-determination as in Southern Sudan and other examples, Solheim said in Oslo, a week ago.

“Frankly, there are two international politicians who have taken an interest in Sri Lanka from the West over the last three years. Bob Blake, the American Deputy Secretary of State and myself. We only get blame for this.” Solheim further said.

Eezham Tamil political observers, comparing the addresses of Solheim and Jude during the same week, said that if genocide and denial of right to self determination of the people is going to be the model of the so-called international community in implementing a new world order, then the edification of those who ideologically steer it is of utmost priority for the collective struggle of the masses, for the model is going to be a bane to entire human civilization.

Eezham Tamils having a case of life and death for themselves as a nation, and having a responsibility to the entire humanity in this respect, should realize what should not be compromised and where to address their struggle as a priority, the political observers further said.

Significantly, on Friday of the same week, C. Mahendran, a leader of a mass-based, All India political party, the Communist Party of India, highlighting the need of a collective mass struggle of Tamils in the island, in Tamil Nadu and in the diaspora for a referendum to democratically decide the political status of Eezham Tamils, said, “If Washington and New Delhi want to refuse our rights let them try.”

Today, as a people in exile, gathered in hundreds of thousands, whom do we remember and what do we remember? Are we here to remember a loss, a tragedy or a defeat that happened three years ago? I would say, no, none of these. We are here to remember the highest achievement of modern Tamil history. When the entire international community, due to pressure from the major powers opposed them and demanded them to give up our struggle, three years ago, on this day in 2009, facing the genocidal army of the Sri Lankan state, they decisively said no, they will not give up our struggle; instead, they will give up their lives. This is the highest achievement that a Tamil can reach in modern Tamil history. It is this achievement we remember today. Let this Remembrance Day reflect unity, not division among the Tamil people who share a common goal.

And they were killed because all of them shared and many of them unconditionally stood for their collective political aspirations against the genocidal Sri Lankan state which was heavily aided by the major powers in the world.

These lives who never gave up their struggle are the reason for us to gather here today and where do we go from here? Some say Mullivaikkal marks the end of Tamil Eelam, but for us who uphold Mullivaikkal as the highest achievement in our journey towards national liberation struggle it becomes our moral compass, our power and our strength to reach our goal.

Therefore, let this day be the day that we re-commit ourselves as a people to the goal of self-determination, homeland and nationhood amidst pressures coming upon us in the name of realism and expediency in international diplomacy.

Let me quote Martin Luther King who once said: 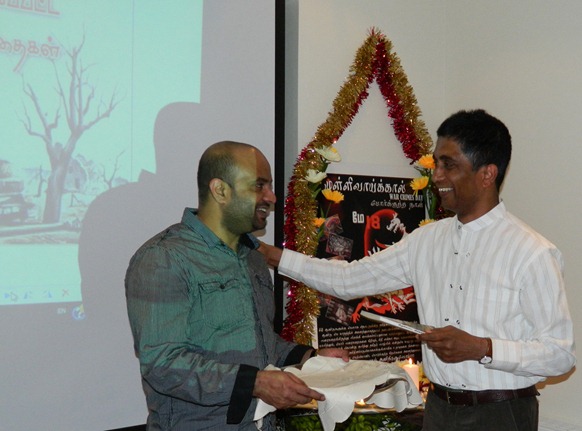 Dr Fernando receiving the copy of a poetry book by the exiled writer Thirukumaran [left]. The book contains 68 poems which depict not only the pain and suffering but also the power of resistance. Some of these poems were read at the Mu’l’livaaykkaal Remembrance event in Dublin.

A massive re-commitment to our collective political aspirations is needed more than ever before as the Sri Lankan state has intensified its second phase of genocide in the Tamil homeland today. The genocidal war continues today in the name of post-war reconstruction, again aided by the international community, through heavy militarisation and Sinhala colonisation and thereby altering the entire cultural, social and economic landscape of the Tamil people.

Amidst on-going arrests, disappearances, rapes, torture and killings the people in Tamil homeland continue to be resilient. For them Mullivaikkal is not an end of a journey.

In an open memorandum to the Tamil National Alliance they have clearly stated their collective political aspirations.

Let the memories of Mullivaikkal and the resilience of the people in the Tamil homeland inspire us and may the on-going genocide in Tamil homeland instil in us an urgency to hasten our journey towards freedom. 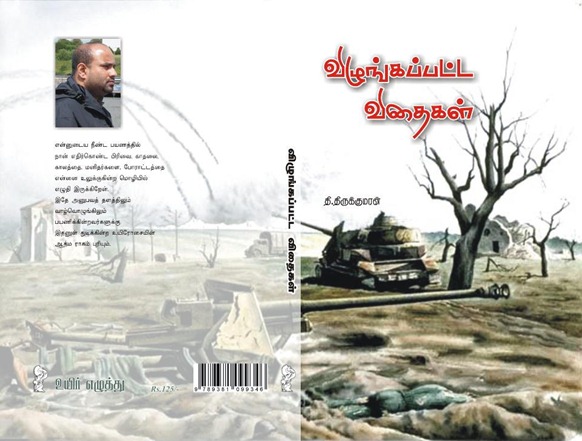