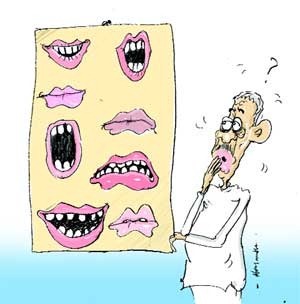 Sarath Fonseka left prison last week with his right foot forward. Now if only he can keep it out of his mouth. We might have some chance at a viable opposition.

Indeed, Sri Lanka is in dire need of an opposition – and at this point, it doesn’t even matter who leads it. A strong opposition is central to maintaining a healthy balance of power. Even if the Abominable Snowman were to turn up now and make a success of it, he would be welcome.  Surely, anyone is better than the vacillating pussy willows that purportedly make up our opposition today.

But will Fonseka do the job? A lot seems to depend on whether he has learned to put a lid on it; on whether, while contemplating the four walls of his prison cell to the sound of his whirring table fan, he had finally realised that his wayward gob was one of the main reasons he got into so much trouble. He was blabbering so much that his tongue started to run away with him-fast. That wasn’t too prudent.

Sri Lankan politics is a queer phenomenon. Some people can get away with saying or doing anything. Mervyn Silva is a case in point. Whatever he does – and much of it isn’t pleasant – the worst he gets is a slight tap on his furry rump. Then off he trots down the same path to carry out the same tomfoolery all over again.

But some people, particularly those aspiring to be a country’s president, cannot behave like this. They are expected to exercise more restraint. And restraint was not something Fonseka evinced partiality to, particularly towards the end of his presidential campaign. He much preferred to disseminate his thoughts (whatever they might be) in lively, often derogatory, prose that did not sit well with his opponents.  He even started calling people names. That’s hardly prose. Or nice. Or necessary.

Whether or not he returns to this format remains to be seen. One possibility is that Fonseka will now start roasting the individuals he believes threw him in jail. While the media would love this-it doesn’t get any better than a short-tempered ex-general with an extensive vocabulary – it might not sit well with the millions of people who still support their rulers without automatically backing their governance and economic record.

Or, this could turn out to be a slinging match between Fonseka and the establishment: “I-won-the-war” versus “No, I won the war.” There was a lot of that as the last presidential campaign drew to a close. Although this is not a question worth dwelling on (how, even by the wildest stretch of one’s imagination, can war or victory belong to a single person?), it does have a certain animal magnetism.

The possibilities for stuff to get peevish are endless. And that will once again deprive Sri Lankan politics of a vibrant, constructive counterforce that could bring out the best in our government, instead of the worst – if that were possible. It doesn’t matter who does it, but this regime needs a good challenge. And since the existing opposition is too busy plucking the body hairs off each other, somebody else has got to do it.

The government let Fonseka out because it had nothing to lose. He was becoming more of a hero inside than when he was outside. The few words he uttered while whizzing in and out of various courthouses or while entering or leaving hospital were eagerly digested whereas his long speeches, made while he was a free man, did not garner the same attention.

Fonseka was seemingly falling ill and it looked rather ugly keeping a sick man in jail on charges that were far from heinous. And, not that it mattered, but by releasing him from jail meant the government would have something “to show” in America.

President Rajapaksa signed the pardon papers on the night of May 18. In the US, this was the morning of that day when External Affairs Minister G.L. Peiris and his delegation were scheduled to meet US Secretary of State Hillary Clinton. It was no secret that Washington treated Fonseka as a political prisoner. Again, not that it mattered. Wilder coincidences have happened.

Besides, he was discharged from prison on a tight leash. Fonseka can’t contest an election for seven years. He is not a “real” threat to the incumbent president.  And yet, he could be a challenge to systems that do not work properly. Isn’t that good enough?

A comatose opposition is running us to ruin. Even certain ministers confess that they have become complacent because nobody holds them to account. There has to be a check on this unbridled power.