Eezham Tamils in the UK gathered outside the UK Prime Minister’s residence at 10 Downing Street on Saturday demanding withdrawal of an invitation extended to Mahinda Rajapaksa for the upcoming Diamond Jubilee celebrations of Queen Elizabeth. A petition given to the authorities by the Tamil Coordinating Committee UK (TCC-UK) which had organised the event underscored the significance of Britain recognizing the protracted nature of the genocide of the Tamils in the island stating that “given its colonial history on the island, the UK, more than any other international power, is aware that the Eelam Tamils are a nation of people with their traditional homeland in the north and east of the island. Eelam Tamils expect the UK government to recognise this truth which can go a long way in helping halt the genocide.”

The long regnum of Queen Elizabeth II is almost contemporaneous to the post-colonial genocidal plight of the nation of Eezham Tamils, resulting from the legacy of the British rule.

Before the Sinhala-Buddhist State in the island severed its last token relations with the British monarch in 1972, the ultimate appeals of the helpless Tamil leaders on many occasions in their democratic struggle used to be directed to the Queen in the form of ‘telegrams.’ And the leaders, including SJV Chelvanayakam, were often ridiculed for the practice by the Sinhalese as well as the so-called ‘leftist’ Tamils, many of whom now sitting in the capitals of the West have forgotten their duties, commented an old generation participant of the London demonstration to TamilNet.

“The ‘telegrams’ have to be answered at least now, if the Conservative Establishment in London cares for not leaving the Queen’s long rule marked with a blot on the question of Eezham Tamils that has now become global,” the participant further commented. He was happy that at least now the British Tamils have gathered guts to address the issue directly to the perpetrators rather than beating around the bush with the agent state. 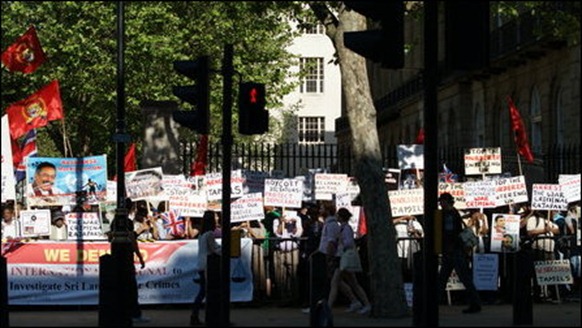 Meanwhile, the petition of the TCC-UK further said: “Given that the UK is privy to several reports by reputable human rights groups on the nature and scale of international crimes committed by the Sri Lankan armed forces, of which Mr Rajapaksa is the Commander in Chief, Eelam Tamils are puzzled by apparent lapse in the vetting procedure.”

“That Sri Lankan troops under the direct command of Mr Rajapaksa, his brother the Defense Secretary, Gothabaya Rajapaksa, and the Army Chief, Sarath Fonseka, murdered more than 40, 000 Eelam Tamil civilians and made disappear more then 147, 000 is widely acknowledged in international circles, including the March 2011 report of a United Nations Experts Panel.”

“In this backdrop, the decision of the UK government to allow such an individual to join the celebrations raises fresh questions on the UK’s commitment to human rights.”

“Mr Rajapaksa is only the latest of several Sinhala-Buddhist leaders who have been directing a protracted campaign of genocide against Eelam Tamils. This long process had been set in motion by the decision of the last British colonial rulers to hand over complete control of the island, including the Tamil homeland to the north and east, to the Sinhalese.”

“Given its unique contribution to the protracted campaign of genocide, the UK, Eelam Tamils believe, should take a lead role in prosecuting perpetrators of war crimes, crimes against humanity and genocide on the island. Further, given its colonial history on the island, the UK, more than any other international power, is aware that the Eelam Tamils are a nation of people with their traditional homeland in the north and east of the island; Eelam Tamils expect the UK government to recognise this truth which can go a long way in helping halt the genocide.”

Speaking to TamilNet, Dr. Andrew Higginbottom, lecturer in Politics and Human Rights at Kingston University, who has also joined the Tamil demonstrators at 10 Downing, said that the invitation to Rajapaksa was a political decision and thus, was the responsibility of British PM David Cameron.

He added that the Conservative government was being duplicitous because it knows that Rajapaksa was responsible for the genocidal attack on the Tamil people, but for their own reasons they don’t hold him responsible.

The UK, tagged behind the USA and India, doesn’t recognize at all that there was a genocide and there is an on-going structural genocide, The evil basically stems from the Nelson’s Eye of the erstwhile empire, and who else could take care of it if the British Tamils are not, commented the old generation Tamil participant in the demonstration. 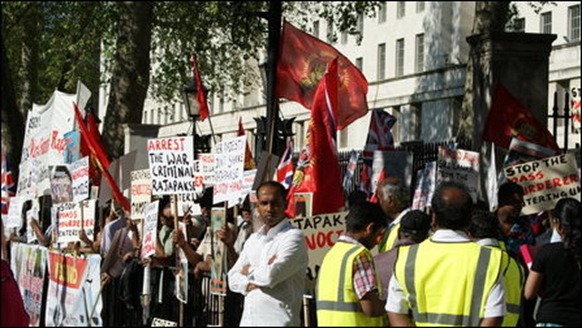 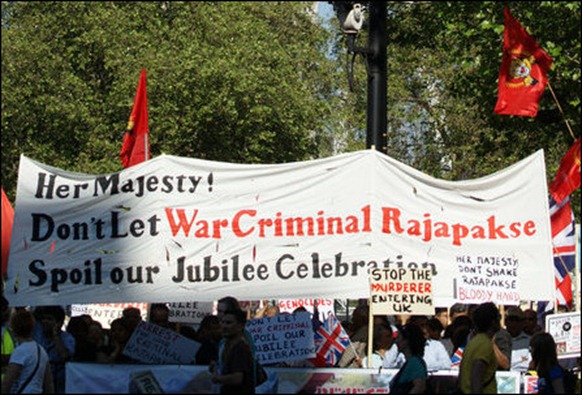