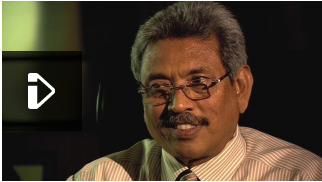 Sri Lanka’s defence secretary has said it is not appropriate to view the north of the country, over which a separatist war was fought, as a predominantly Tamil area.

Gotabhaya Rajapaksa, who many credit with defeating Tamil rebels, also told the BBC there were few civilian casualties in the war’s closing phase.

Human rights groups say tens of thousands died at the end of that war.

He also cast doubt on accounts of enforced disappearances after the war.

Mr Rajapaksa, brother of Sri Lanka’s President Mahinda Rajapaksa, portrayed a normalising Sri Lanka with opportunities for all regardless of ethnicity.

But he firmly declined to discuss Sarath Fonseka – the man at the helm of the army at the end of the war and who later fell out with the president – who was released from prison last Monday.

The army defeated the separatist Liberation Tigers of Tamil Eelam (LTTE) rebels after 26 years of a bloody civil war in May 2009.

Meeting Mr Rajapaksa in his heavily guarded office near the Colombo shorefront, the BBC asked him about a recent local government reshuffle in the north which has seen some senior Tamil officials replaced with Sinhalese personnel.

"Earlier before the war, all were Sinhalese," Mr Rajapaksa said. Just as "a lot of" Tamil officers worked in southern districts, Sinhalese and Muslims should be able to work in the north. "It is part of Sri Lanka."

So were Tamils correct to view the north as a predominantly Tamil place?

Many Tamils favour provincial devolution to give them a greater voice in areas where they predominate.

The government and the largest Tamil party have been holding talks on this issue, but these have currently stalled.

Gotabhaya Rajapaksa commented on the contentious subject of civilian casualties in the final stage of the war – one factor that prompted a critical resolution on Sri Lanka at the UN Human Rights Council in March.

A recent government census, given little publicity, suggested some 7,400 northern Sri Lankans were killed during the last months as a result of the fighting.

But Mr Rajapaksa said only a few of these were civilians and most were Tamil Tiger fighters. 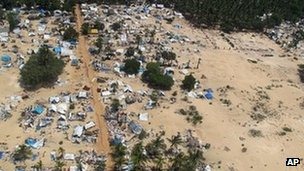 "Within this 7,000-odd number that includes the combatants as well!"

Six thousand army soldiers had been killed in this period, he said.

He said the census-takers had visited family after family and taken the names of all those who died. There might have been "certain" civilian casualties but "not in the numbers you quote".

If there were proven violations of the laws of war "then we can punish, no problem, but you have to prove that".

The army had defeated a terrorist group that killed innocent people, destroyed property, buses, trains, hotels and many other targets, he said.

"All this we have stopped… but you don’t talk about that. You are supporting the terrorist cause!"

Gotabhaya Rajapaksa gave scant comfort to the families of people who have recently disappeared.

Human rights campaigners documented 32 such disappearances between October and February and several more since then.

But Mr Rajapaksa dismissed this as "wrong allegations".

Recent cases include Ramasamy Prabagaran, who was abducted before he was due to testify on police torture and remains missing; and Sagara Senaratne, who was suddenly freed after his brother-in-law, a minister, reportedly contacted top government figures.

But Mr Rajapaksa asked why the authorities should want to victimise such people and said many recorded as missing were criminals who had escaped abroad.

In the north, he said, life was getting back to normal – fishing restrictions had been lifted, the army had moved out of contentious areas such as running restaurants, and anti-LTTE Tamil groups had now been disarmed.

In the country as a whole, he said, the government had opened a window to progress by ending the war.