The alleged threat by DMK chief M Karunanidhi today that his party will pull out of the ruling UPA if the government does not roll back the petrol price-hike sounds hollow and repetitive, given his past record of threats and subsequent back-downs.

Additionally, getting out of the UPA will land him in absolute political wilderness.

Addressing a DMK protest meeting against the price hike here, Karunanidhi said his party had walked out of alliances before, “whether it is the BJP or the VP Singh cabinet.”

“The DMK is in the coalition. But it is our duty to voice concern against policies that will affect the people,” he said.

Did he say clearly that he would pull out? No.

Was it a veiled threat? Yes, but if only one wishes to read it so.

But that is vintage political strategist Karunanidhi. 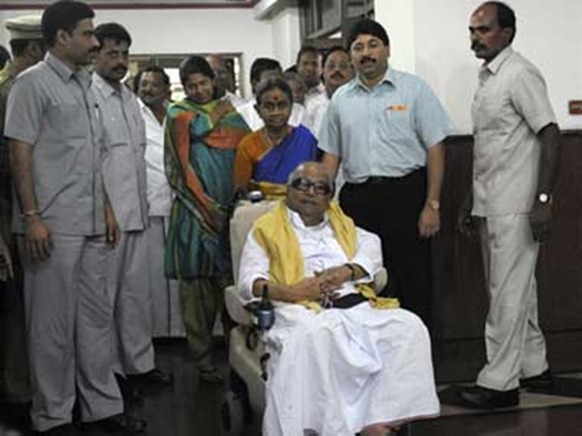 Wheeling out of the UPA? Unlikely.

The DMK patriarch had played a similar pull-out threat earlier on the Sri Lankan Tamil issue, but backed down when the Centre promised action. Although the issue was much more emotional in Tamil Nadu than the present fuel price-rise, the DMK didn’t pursue its threat although the government of India couldn’t do anything about the Sri Lankan army’s attack on Tamil civilians.

He in fact threatened to pull out not once, but twice. In his first threat in 2011, he said if the government did not enforce a ceasefire in Sri Lanka he would pull out. He also got his MPs to submit their resignations to him but nothing happened even as the Sri Lankan army went ahead with its war.

In March 2012, he repeated his threat again, this time on the UNHRC resolution against Sri Lanka. Under pressure from all quarters, including chief minister Jayalalithaa, the union government supported the resolution but not before doing its bit to dilute its efficacy. The DMK kept quiet on the dilution of the resolution because in competitive politics symbolism is more important than actual deeds.

The latest threat is also likely to be out of sheer political compulsion. Normal life is in disarray in Tamil Nadu with a severe power crisis and the rise in prices of petrol.

Jayalalithaa lost no opportunity in raising her voice against the price-decision and Karunanidhi cannot keep quiet.

Of late, on public issues, the DMK has not been nimble and has mostly ended up doing a catch-up job. For instance, when the Centre sent a parliamentary delegation to Sri Lanka recently, it was AIADMK that first sensed an opportunity to score a political point by pulling out its member. Missing out on the first-mover advantage, the DMK followed suit and withdrew its member as well.

This time too, his voice of threat is not shriller than before. Perhaps he would up the ante a little more than before and most likely the government will roll back part of the price-hike. He has no other option but to protest and display some brinkmanship. A veiled pull-out threat appears to be the natural language.

Pulling out of the UPA will be suicidal for Karunanidhi. Not only would it not serve any purpose, but it also would make him and his party highly vulnerable. He has no office of authority in the state or allies who are powerful. The only safeguard he has now is the UPA government and his MPs/ministers.

With no elections round the corner and the political wave that brought Jayalalithaa to power still alive, an exit from power will serve no purpose.