Recent developments point to an increasingly intractable situation developing in the ongoing effort towards national reconciliation. The bilateral talks between the government and the Tamil National Alliance (TNA) have run aground and the Parliamentary Select Committee mooted by the President as a mechanism to advance a multi party dialogue, is yet to be constituted. There had been signs that the TNA had adopted a more accommodating stance in its dealings with the government and other parties in the search for a political solution to the national question. But the speech made by TNA leader R. Sampanthan at the national convention of the Ilankai Thamil Arasu Katchi (ITAK) on Sunday, seems to have up-ended that trend.

This year’s joint May Day rally by the UNP and TNA in Jaffna, where the TNA leader was seen waving the national flag along with UNP leader Ranil Wickremesinghe, was one of those events hailed as a positive sign that the TNA saw itself as part of the Sri Lankan nation. In diverse fora, Sampanthan has also asserted his desire to seek a solution "within a united Sri Lanka." Winding up a visit by an Indian parliamentary delegation in April, India’s Opposition Leader Sushma Swaraj hailed Sampanthan’s leadership, declaring at a press conference that he had assured her "not once, twice, but three times that he sought a political settlement in an undivided Sri Lanka." 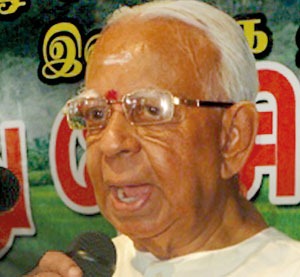 These were developments that contributed to building greater confidence in the reconciliation process. So Sampanthan’s explanation of the ‘softened stance’ while addressing the party faithful at the ITAK convention in Batticaloa, comes as something of a surprise. In the English translation of the speech serialized in a local newspaper and which also appeared on the internet, he is reported to have said: "The softening of our stance concerning certain issues, and the compromise we show in other issues, are diplomatic strategies to ensure that we do not alienate the international community. They are not indications that we have abandoned our fundamental objectives."

Does this imply that the changed attitude and public gestures are merely ‘tactics?’ If so, to what end?

Sampanthan says: "Our expectation for a solution to the ethnic problem of the sovereignty of the Tamil people is based on a political structure outside that of a unitary government, in a united Sri Lanka in which Tamil people have all the powers of government needed to live with self respect and self sufficiency." On the face of it this would seem to be a reiteration of belief in a solution with powers devolved within an undivided Sri Lanka. So it is confusing when the TNA leader appears to contradict that position later by saying, "We must prove to the international community that we will never be able to realize our rights within a united Sri Lanka."

The speech is replete with references to the ‘international community,’ and repeatedly associates it with the business of achieving the party’s goals. For example Sampanthan says, "The current practices of the international community may give us an opportunity to achieve, without the loss of life, the soaring aspirations we were unable to achieve by armed force."

Another such reference is when he says: "Our patience too, has its limits. Once we have reached that limit, we will move onto the stage of our effort. We will not hesitate to gather our people together and with the support of progressive forces in our country, and the international community, even engage in a non-violent struggle. We will decide on specific deadlines and when the time comes for such action, we will act."

While there is much innuendo in the lengthy speech that can be understood in different ways, these remarks leave room to be interpreted as an indirect endorsement of secession by other means. If that is the case, it would be relevant to ask if this was the mandate given by Northern populations that voted for the party in the 2010 parliamentary elections.

UNP and Opposition Leader Ranil Wickremesinghe, who had held consultations with Sampanthan on recommencing bilateral talks and the TNA’s willingness to participate in the Parliamentary Select Committee, made a statement in parliament on May 24 where he said he was "gratified by Mr. Sampanthan’s positive response."

This was just three days before the ITAK party convention. Seeing that the speech made at the convention was overall a ‘thumbs down’ verdict on the reconciliation effort so far, one cannot help but wonder how such a reversal of attitude could be adopted in such a short space of time. It is difficult to avoid the conclusion that Sampanthan tends to say different things to different audiences on the subject of reconciliation. It must be said that Wickremesinghe has exerted himself considerably during the past month in an effort to reach agreement on an agenda based on which the government and opposition parties may proceed with a dialogue. In parliament he said: